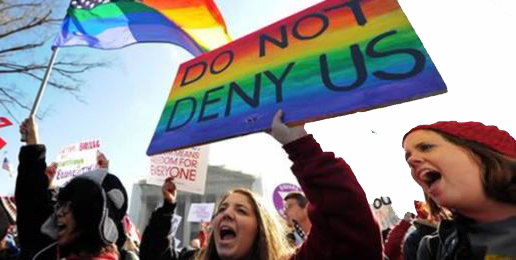 Last week, the Obama administration enacted a rule that prohibits the U.S. Agency for International Development (USAID) from contracting with groups that engage in “discrimination” against people who identify as gay, lesbian, bisexual or transgender. According to National Security Advisor Susan Rice in a speech on Wednesday:

This rule means that any organization that contracts with USAID must ensure that all people can benefit from its federally-funded programs, regardless of race, religion, disability — or sexual orientation and gender identity.  It’s a major step towards ensuring that American assistance is provided in a fair and equitable manner.

But “fair and equitable” have a specific meaning for the Obama administration. It doesn’t include the unborn. “Discrimination” is still permitted against the unborn — USAID has given tens of millions of dollars to Planned Parenthood and other pro-abortion groups, and engaged in other anti-life policies.

It does include LGBT people. As Rice notes elsewhere in the talk, some countries punish homosexual acts with death, and a death penalty law was narrowly defeated in Uganda a few years ago. Her speech suggested that supporting the LGBT agenda is more important to the Obama administration than stopping the Syrian slaughter, preventing Russia’s advance internationally and protecting Christian refugees.

She thanked the Human Rights Campaign (HRC) and another group “who fight so admirably to promote equal rights and dignity for all.” Co-founded by Terrence Bean — who squirreled out of being found guilty in the alleged sexual abuse of a minor — HRC has targeted pro-marriage advocates to such a degree that a college professor told me he’s never sure if his family is safe.

HRC has also attempted to bully Johns Hopkins University into denouncing a much-cited study that debunks LGBT talking points about sexuality, and has led the dishonest-yet-successful effort to tar North Carolina’s HB2 “bathroom” law as bigoted and hateful. (The Obama administration has also contributed to this misleading state of affairs, with Attorney General Loretta Lynch comparing the very modest bathroom law to racist Jim Crow laws.)

Finally, after referencing the Pulse nightclub shooting this summer, Rice compared HB2 and state-based religious liberty laws to unfair and sometimes inhumane treatment of people who identify as LGBT in other nations. She briefly mentioned the cultural and legal LGBT fight in Indonesia, “governments in Central Asia and Eastern Europe” that are passing anti-homosexual laws and how that “in as many as ten countries, same-sex acts are punishable by death.” She then said:

And, in Syria and Iraq, ISIL has unleashed a unique brutality on LGBT people — dragging gay men behind trucks, stoning them, and burning them alive. ISIL works with chilling efficiency, often going through the cell phones and social media accounts of their victims to identify more LGBT individuals for slaughter. As we speak, the United States is supporting Iraqi and Kurdish forces as they push to liberate Mosul, where ISIL fighters were taped hurling gay men off of buildings.  As one Iraqi man testified before the UN: “In my society, being gay means death.”

Again, some of these laws are downright horrifying, and ISIS’ actions are the same. The Obama administration is right to condemn them, and put pressure on nations to change those practices and laws. But Rice’s speech shows that the Obama administration’s ideology on LGBT “rights” continues to go above and beyond what is right and just, instead giving state-sanctioned preference to the LGBT agenda over the rights of business owners, women and children.

This article was originally posted at the Stream.org