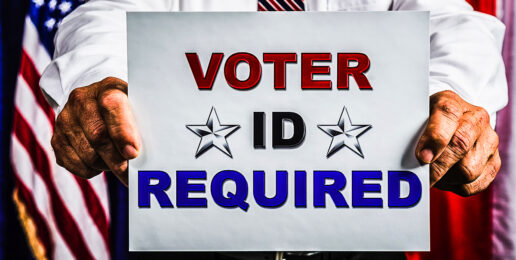 I (and likely millions of other Americans) were surprised to learn from the racism sleuths among us that Georgia recently enacted a Jim Crow voter suppression law the likes of which America has never seen. In light of that disturbing revelation, I wondered if there were any other states with such laws and was even more surprised to discover that from sea to shining sea, America is riddled with Jim Crow laws. There are so many Jim Crow voter suppression laws in so many states that I don’t have time to list them all, so I’ll just highlight a few.

According to the New York Post, Chuck Schumer may have some ‘splainin’ to do:

the Empire State still makes it harder to vote than does the state [Georgia] that’s drawing the boycotts. New York offers eight fewer days of early voting and requires a valid excuse to vote absentee.

Yes, Georgia will now ask for a valid ID to vote absentee, but lets you out of the requirement if you attest that you don’t have one.

New York even has a ban similar to Georgia’s new prohibition on the distribution of food and drink in voting lines that President Joe Biden labeled “Jim Crow in the 21st century.” …

Those “mobile ballot drop-off” vans that Georgia just restricted? New York doesn’t allow them at all.

It’s not only New York that attempts to suppress the black vote by requiring an excuse to vote absentee. Delaware, Connecticut, and New Hampshire also require such excuses.

Georgia’s new law expands existing early voting requirements. The “new law …  adds a mandatory weekend day for early voting, requiring two Saturdays of early voting. The old law required one.” To be truly fair, early voting should be expanded another few months. But Delaware hasn’t begun offering any early voting days. Those won’t start until next year. Maybe Delaware voters had to wait for vote-suppressor Joe Biden to leave the state before getting rid of that Jim Crow relic.

It’s weird that Biden and Schumer were elected year after year while remaining silent on their states’ voter suppression laws. I thought silence was violence.

Georgia’s law makes some changes to the number and location of ballot drop boxes—drop boxes that were added in 2020 because of the pandemic. If you’re alarmed by that, you won’t believe what else I learned. Arkansas, Indiana, Mississippi, Missouri, Oklahoma, New Hampshire, North Carolina, Tennessee, Texas, and West Virginia provide no ballot drop boxes. Who knew New Hampshire has been suppressing the black vote?

We all know what needs to happen now. Every professional sports event scheduled in these states must be canceled.

After ruminating about and researching the prevalence of racist voter suppression laws, I began wondering what other forms of racist suppression I may not have noticed while traipsing about America draped in my white privilege. Well, those who oppose Jim Crow photo ID laws better be sitting down for this next bit of shocking news I discovered about America.

Who wants to live in a country like that? Not me. So, I went on a search for countries without racist suppression laws and much to my dismay, I learned there are very few places in the world devoid of racism.

All the coolest countries are racist!

In my research, however, I came across some confusing information.

First, I read something by Hans von Spakovsky which threw an ideological monkey wrench into the “Georgia Is a Hotbed of Racism” narrative:

Georgia provides a free photo ID to anyone who doesn’t already have one. …

Section 25 of the bill doesn’t even require voters to provide a photocopy of their ID. Instead, the voter can simply write “the number of his or her Georgia driver’s license or identification card” on the application for the absentee ballot.

Moreover, if the voter doesn’t have such a Georgia ID card, she can “provide a copy of a form of identification listed” in another code section of Georgia law (§ 21-2-417(c)). And what does that code section say? That you can satisfy the ID requirement with a “copy of a current utility bill, bank statement, government check, paycheck, or other government document that shows the name and address of such elector.”

Now where do you think the Georgia legislature got that language? They got it from federal law, the Help America Vote Act of 2002. Section 303(b) of this law (codified at 52 U.S.C. § 21083) requires an individual who registered to vote by mail and who is voting for the first time in a federal election (whether in person or by mail)  to instead provide “a copy of a current utility bill, bank statement, government check, paycheck, or other government document that show the name and address of the voter” if he doesn’t have a “current and valid photo identification.”

The language on voter IDs for absentee ballots in the new Georgia law is thus identical to the language in federal law, promulgated through the Help America Vote Act. And guess who voted to approve this federal law in 2002? Why, then-Sen. Joe Biden of Delaware. In fact, the vote was 92 to 2, and included in the “yes” votes were Sen. Dianne Feinstein, D-Calif.; Sen. Dick Durbin, D-Ill.; Sen. Harry Reid, D-Nev.; and Sen. Patrick Leahy, D-Vt.

Were they all imposing “Jim Crow” on American voters? I don’t seem to recall the Major League Baseball Players Association boycotting any of the states of these senators—or any of the other senators who voted in favor of the Help America Vote Act. Or boycotting their own stadiums, which require IDs to pick up will call tickets.

A study conducted by the National Bureau of Economic Research and published in 2019 found that voter ID requirements have virtually no effect on voter turnout:

For all the heated debates around strict voter ID laws, our analysis of their effects obtains mostly null results. First, the fears that strict ID requirements would disenfranchise disadvantaged populations have not materialized. Using the largest individual-level dataset ever assembled to study voter participation, we do not find any negative effect on overall turnout and registration rates or on any group defined by race, age, gender, or party affiliation.

Confusing? A bit, but oh, well, I’m with President Biden who once said, “We choose truth over facts.”

I did learn that one news report about the Georgia law was wrong, and this will be a huge relief to many. For those people of color and colorless people who regularly lose consciousness from thirst or starvation while waiting in line to vote, just pack up all your care and woe. Georgia will feed you.