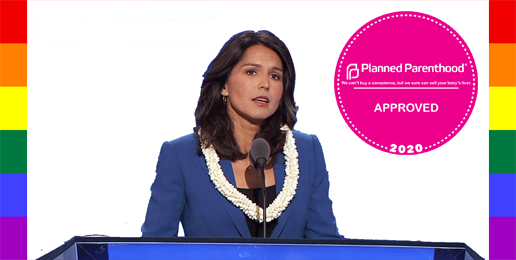 Two decades ago, Gabbard rightly opposed the legal recognition of homosexual relationships as marriages. Later, as a Democrat, she issued not one but two groveling apologies for her prior conservative views on marriage. Here is her most recent apology released in Jan. 2019 when she began her failed quest to be the Democrat candidate for president:

In my past I said and believed things that were wrong, and worse, they were very hurtful to people in the LGBTQ community and to their loved ones. Many years ago, I apologized for my words and, more importantly, for the negative impact that they had. I sincerely repeat my apology today. I’m deeply sorry for having said them.

My views have changed significantly since then, and my record in Congress over the last six years reflects what is in my heart: a strong and ongoing commitment to fighting for LGBTQ rights. …

I … grew up in a socially conservative household where I was raised to believe that marriage should only be between a man and a woman. … While many Americans may be able to relate to growing up in a conservative home, my story is a little different because my father was very outspoken. He was an activist who was fighting against gay rights and marriage equality in Hawai‘i, and at that time I forcefully defended him and his cause.

When we deny LGBTQ people the basic rights that exist for every American, we’re denying their humanity denying that they are equal. We’re also creating a dangerous environment that breeds discrimination and violence. Because when we divide people based on who they are, or who they love, all we’re doing is adding fuel to the flames that perpetuate bigotry and hatred. I’m so grateful to my friends, my loved ones, both gay and straight, who have patiently helped me see how my past positions … were causing people harm. I regret the role that I played in causing such pain, and I remain committed to fighting for LGBTQ equality.

Again, for the dull of mind, homosexuals always had the right to marry, just as polyamorous people, sibling lovers, and “minor-attracted persons” have a right to marry today. Homosexuals were legally unable to marry people of the same sex, just as consensual non-monogamists can’t marry multiple people, sibling lovers can’t marry their siblings, and pedophiles can’t marry minors. What homosexuals sought was the unilateral right to redefine in law the parameters of marriage. (And now, polyamorists are doing likewise.)

Does Gabbard want to “divide people based on” their love for multiple people, or close blood relatives, or minors? Does she want to add “fuel to the flames that perpetuate bigotry” against consensual non-monogamists, incestuous couples, or adults who love children? Does she want to deny that they are equal? Does she want to hurt them and their loved ones by continuing to exclude them from legally marrying the person or persons they love?

Someone should pose those questions to Gabbard.

In addition to throwing her father under the political bus driving her ambition, Gabbard said that by opposing the legal redefinition of marriage, conservatives deny “LGB” and “T” people their humanity and that conservatives create a dangerous, discriminatory, violent, bigoted, and hateful environment. Now that she’s no longer a Democrat, let’s see how she zigs and zags her way out of that rhetorical ugliness aimed straight at conservatives.

From the website Vote Smart, Americans can learn a boatload of information about Gabbard that may surprise them.

For example, they will learn that Gabbard is a strident advocate for abortion who said,

The very real possibility of Roe v. Wade being overturned terrifies me. I am sick of women’s bodies being used as pawns so politicians can score cheap political points at the expense of their freedom and safety. I am wholly committed to abortion remaining safe, legal and rare. We must commit to defending a woman’s right to choose.

Tulsi has a 100% voting record with both Planned Parenthood and NARAL. Tulsi is committed to defending a woman’s right to choose, which government has no place infringing on.

If humans in the womb are fair game for extermination, if they have so little intrinsic worth that powerful humans can order their deaths for any or no reason, then why should abortion be rare?

If, on the other hand, humans in the womb are, indeed, humans with, therefore, intrinsic worth, why should abortion be legal?

And if the right of a woman to control her reproduction comes into direct conflict with a less-developed human’s right to exist, which right does Gabbard believe is a right of a higher moral order?

Gabbard’s compassion and sense of justice don’t seem to extend either to the unborn or to citizens and illegals who are suffering on our southern border due to our de facto open border. Vote Smart reports that Gabbard opposes the construction of a wall along the Mexican border and opposes requiring illegal immigrants to return to their country of origin before becoming eligible for citizenship.

Conservatives may want to ask Gabbard if her views on gun issues have changed since her office released this statement in 2018:

Tulsi … has long called for reinstating a federal ban on military-style assault weapons and high-capacity magazines, requiring comprehensive pre-purchase background checks, closing the gun-show loophole, and making sure that terrorists are not allowed to buy guns. Tulsi has an F-rating from the NRA, a 0% rating by the Hawaii Rifle Association, and a 100% rating by the Brady Campaign to Prevent Gun Violence.

Then there are Gabbard’s troubling statements on energy production, which would put a smile on the clucking faces of climate Chicken Littles everywhere—if chickens could smile:

I also support a ban on fracking, ending the $26 billion/year in fossil fuel subsidies, ban offshore drilling … and ban all subsidies or waivers to the nuclear power industry.

Gabbard’s political shapeshifting may point more to the presence of political ambition than to principled conservative convictions. We’ll just have to wait and see.