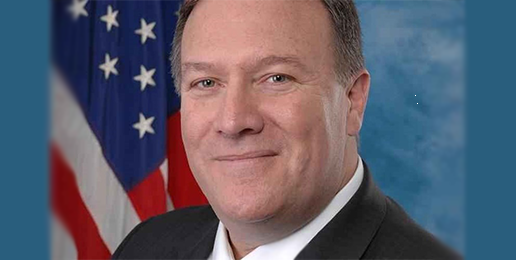 During a recent Senate Foreign Relations committee hearing, Mr. Pompeo was asked about past comments he made about his religious views on marriage and sexuality. At a church event in 2015, Mr. Pompeo commented on the U.S. Supreme Court opinion that forced states to recognize homosexual “marriage.” Mr. Pompeo quoted a pastor who had said our nation had “endorsed perversion and called it an alternative lifestyle.”

U.S. Senator Cory Booker (D-NJ) took issue with Mr. Pompeo’s past acknowledgment of the national sin of condoning homosexuality and wanted to know if he still held that view. Sen. Booker asked Mr. Pompeo: “Is gay being a perversion?”…”Yes or no – do you believe gay sex is a perversion?”…”So, so you do not believe it’s appropriate for two gay people to marry?”

Mr. Pompeo answered Sen. Booker in the affirmative saying, “Senator, I continue to hold that view…” Meaning Mr. Pompeo maintains the biblical view that homosexuality is a sexual sin, a perversion before God. Mr. Pompeo continued saying, “My respect for every individual, regardless of sexual orientation, is the same.” Christians can and should detest sin, but still love the sinner.

Sen. Booker offered a conflicting response to Mr. Pompeo saying, “Your views do matter…and I do not necessarily concur that you are putting forward the values of our nation when you believe that there are people in this country who are perverse…” (Emphasis added).

Sen. Booker is saying that Mr. Pompeo’s views on homosexuality “do matter” as an individual, but such a person as Mr. Pompeo cannot hold these religious views and still be a qualified nominee for the U.S. Secretary of State.

The Senators and Representatives before mentioned, and the Members of the several State Legislatures, and all executive and judicial Officers, both of the United States and of the several States, shall be bound by Oath or Affirmation, to support this Constitution; but no religious Test shall ever be required as a Qualification to any Office or public Trust under the United States. (Emphasis added.)

When Sen. Booker took the oath of office to the U.S. Senate, he swore he would “bear true faith and allegiance” to the Constitution of the United States. Sen. Booker has violated his oath of office, and the Senate should censure or condemn his radical, unconstitutional comments.

Take ACTION: Click HERE to send an email to U.S. Senator’s Dick Durbin and Tammy Duckworth to urge them to confirm Mike Pomeo’s nomination. Ask them not to ignore the fact that U.S. Constitution specifically forbids religious tests for office.

This article originally posted at AFA.net

Christians Who Undermine Their Christian Witness
b
a
x
r