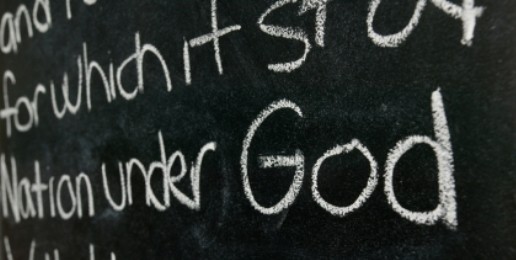 A Massachusetts court has ruled that a “heckler’s veto” will not be tolerated in public schools when it comes to the Pledge of Allegiance.

Dianna Verm, an attorney with the Becket Fund for Religious Liberty, tells OneNewsNow that the American Humanist Association, an atheist advocacy group, filed suit demanding a change in the Pledge in the state’s schools.

“… [T]hey disagreed with the words of the Pledge – specifically the words ‘under God’ – and the court upheld the Pledge of Allegiance with a resounding victory for religious liberty,” the attorney explains.

In fact, the vote was unanimous. But Verm rushes to add the school policy isn’t a burden on anyone. “The Pledge treats everyone the same way,” she says. “Anyone can say it and anyone can choose not to say it if they don’t want to – and they don’t have to give a reason.”

According to Verm, those who filed the lawsuit are being told they don’t have a heckler’s veto in which a small minority can squelch religious freedom and free speech because they don’t like the message.

She explains: “The court is sending a message to these secularist atheists that ‘God’ is not a dirty word, [and that] we don’t have to purge anything that has a whiff of religion from the public square just because it may offend some people.”

The end result of this particular lawsuit, says Verm, should send a message to others considering similar court action. Nevertheless, she emphasizes that the Becket Fund will be there to defend religious freedom if other suits are filed.