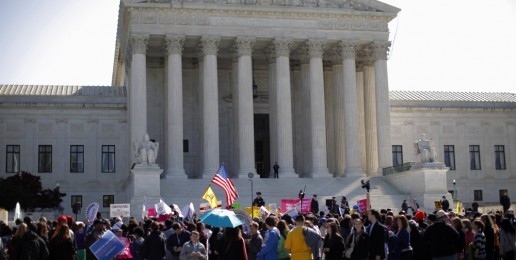 As you know by now, in a 5-4 ruling, the Supreme Court of the United States (SCOTUS) ruled today to uphold the core provisions of President Barack Obama’s Patient Protection and Affordable Care Act (PPAC). By their decision, we now face an egregious threat to American liberty.

This federal legislation contains a highly controversial and unpopular Individual Mandate, which, if not repealed, will force Americans to “buy” federally approved or sponsored healthcare plans or pay a penalty for non-compliance. Contrary to their promises to Congress as well as to the general public, proponents of the PPAC have succeeded in arguing to the Supreme Court that the Individual Mandate will function as a federal tax. We are very concerned that this will set a dangerous precedent for federal mandates.

We believe this law is a threat to personal liberty, religious freedom and family choices. It gives government bureaucrats alarming power over individual citizen’s healthcare decisions and will lead to future conflicts of conscience. Americans will be forced to choose either to comply and abandon their religious beliefs or resist and be fined for exercising their deeply held beliefs.

The PPAC includes provisions for abortion-inducing drugs, contraception and sterilizations, and tax dollars will subsidize many types of abortions. By advancing taxpayer funding of abortion, the PPAC is an attack on religious freedom and individual liberty.

We urge our national lawmakers to repeal the PPAC, and rather than rushing through an expansive overhaul, Congress needs to take a reasonable approach to reforming what’s wrong with healthcare. The federal reach into the lives of each and every American citizen is of grave concern. And the accompanying threats to freedom of conscience challenge the very concept of liberty.

We hope and pray that this monumental decision will be the catalyst to awaken and unite American voters – especially people of faith – this November.  It should also serve to remind believers that we should be praying for true revival and the spread of the Gospel.   As my friend Pastor James McDonald of Morton, Illinois pointed out on his Facebook page, “Do we understand that the One who orchestrates the end, orchestrates the means, and the means He uses is our faithful witness? Rise up, O Church of God!”

And here’s what others are saying:

“Today’s Supreme Court decision will do serious harm to American families. Not only is the individual mandate a profound attack on our liberties, but it is only one section among hundreds of provisions in the law that will force taxpayers to fund abortions, violate their conscience rights, and impose a massive tax and debt burden on American families.

“The Obama administration has created, for the first time in American history, new federal regulations that toss aside the constitutional right to religious freedom by forcing religious institutions and employers to pay for abortion-causing drugs, contraceptives and sterilizations.

“It’s now time to replace those leaders who disregarded the constitutional limitations of their authority and the deeply held religious beliefs of their constituents, voting for the government takeover of healthcare. We must repeal this abortion-funding health care law and restore the Constitution to its rightful place.”  ~ Tony Perkins. President of the Family Research Council

”We are outraged to see the Supreme Court ignoring the constitutional limits the Founders put in place to constrain the federal government’s power over us. Shame on them!

With this decision they have given a blank check to the federal government, forever altering the constitutional concept of checks and balances that has been so crucial throughout our history.

We wholeheartedly believe we must strive to make health care more affordable for all Americans. But it is inconceivable to believe we must infringe on our constitutional rights in order to achieve that.

Women will be especially hurt by today’s decision. As we have seen with the contraception mandate, the politicization of so-called women issues by the left leaves the majority of women extremely vulnerable to the exploitation of a few radical groups that exert much political influence in Congress and the White House.  ~ Penny Nance, CEO of Concerned Women for America

“This is a stunning decision to uphold ObamaCare as a tax. Congress relied upon the Commerce Clause, not the Taxing and Spending Clause. The Court ignored the intent of Congress, which did not intend the mandate to be a tax but rather a penalty. Rulings like this on ObamaCare undermine the confidence of the people in the competency of the Supreme Court to follow the rule of law. Today’s decision damages the image of the Supreme Court and is bad for America.”  ~ Mat Staver, Founder and President of Liberty Counsel and Dean of Liberty University School of Law

“The ‘individual mandate’ was just one problem with the law. Our tax dollars are still being used to subsidize abortion and our Catholic institutions are still being forced to violate our beliefs.

“Congress must act immediately to fix the critical flaws in the health care law and begin to replace them with measured, sensible reforms. At the very least, they should not allow any tax dollars to be used to implement the law while remedies are decided. We encourage them to focus their energy on improving our nation’s health care system in a way that respects all stages of life, protects our consciences, and avoids negatively impacting the economic conditions of Americans.”  ~ Matt Smith, President of Catholic Advocate

“It is astonishing that the majority of the justices did not see the bill for what it really is: a blatant violation of the personal freedoms guaranteed by our Constitution and perhaps a mortal blow to the concept of federalism…  “When a government begins forcing citizens to purchase what it thinks is important or necessary, that government takes a dangerous step away from the freedom-embracing, democratic model.”  ~ Richard Land, president of the Ethics & Religious Liberty Commission of the Southern Baptist Convention.

“The president’s health care law is hurting our economy by driving up health costs and making it harder for small businesses to hire.  Today’s ruling underscores the urgency of repealing this harmful law in its entirety.  What Americans want is a common-sense, step-by-step approach to health care reform that will protect Americans’ access to the care they need, from the doctor they choose, at a lower cost.  Republicans stand ready to work with a president who will listen to the people and will not repeat the mistakes that gave our country ObamaCare.”  ~ U.S. House Speaker John Boehner

“President Obama’s health care law stands as one of the largest tax increases in American history, it will be paid for by young Americans, whose dreams and plans for the future have already been derailed by failed policies that have denied their access to full-time, meaningful jobs in their chosen career paths. Young adults know they will pay the true costs of President Obama’s legislation — over a trillion dollars more in federal spending, more waste and fraud, increased American debt, and the inability to keep or choose healthcare plans that best suit their needs as individuals. Elections have consequences, and young adults will be organizing themselves far more actively than some might assume — they will not settle for leadership that ignores their concerns, limits their freedoms, and continues to bankrupt their futures.”  ~Paul T. Conway, president of Generation Opportunity, Chief of Staff for the U.S. Department of Labor

” Today’s Supreme Court 5-to-4 decision upholding the individual mandate in ObamaCare was surprising. The court rejected the Obama Administration’s main argument that the individual mandate was constitutional based on the Commerce Clause. It rejected the administration’s second argument that the mandate was constitutional under the Necessary and Proper Clause.

“However, five justices, with Chief Justice John Roberts writing the majority opinion, concluded that the mandate was constitutional under Congress’ power to tax. As Roberts wrote in his opinion, “Simply put, Congress may tax and spend.”

“That’s the problem in Washington, isn’t it? There’s already way too much spending, and ObamaCare won’t help that. And it is a huge tax increase — $500 billion over the next ten years.”  ~Gary Bauer, American Values