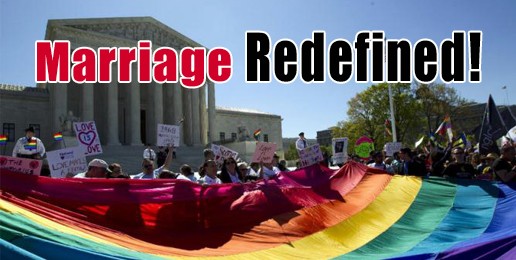 The U.S. Supreme Court decision in the Obergefell v. Hodges case provides yet more evidence that smart people can be monumentally foolish. This decision not only denies reality but also robs citizens of their right to self-government. From the gaseous emanations of their own imaginations, five of our supremacist justices have discerned a heretofore nonexistent constitutional requirement that homoerotic unions be recognized as “marriages.” Justices Kennedy, Breyer, Ginsburg, Kagan, and Sotomayor have also decided to impose same-sex marriage on all states, nullifying the decisions of citizens in states that have legally established marriage as a sexually complementary institution.

Just as Dred Scott and Roe v. Wade gave birth to relentless cultural turmoil, division, and suffering, so too will the Obergefell decision. By imposing on the country a deceit buttressed by false allegations that opposition to the legal recognition of non-marital unions as marriages is motivated by “animus,” these five judges have watered the seeds of strife planted by sexual anarchists.

Theologically orthodox Christians, Orthodox Jews, Muslims, and even many homosexual secularists know that marriage has an intrinsic nature central to which is sexual complementarity and without which a union is not a marriage. Not even the arrogant and foolish rationalizations of five flawed judges can nullify that reality.

If judges, lawmakers, and “progressives” in thrall to the doctrinaire sexuality ideology of “LGBT” activists insist not only on denying reality but also on deracinating religious liberty, speech rights, and association rights of dissenters, they will foment civil disobedience the likes of which America has not seen since the 1960’s.

“Progressives” claim that history teaches that the value of marriage derives from the permanence, fidelity, and stability that the institution engenders, but they assume without proof that these qualities have no inherent connection to the sexual complementarity that was an integral part of the historical institution they tout as conducive to human flourishing.

Do permanence, fidelity, and stability enhance the moral status and cultural benefits of every type of loving union? Would the cultural perks of permanence, fidelity, and stability justify the legal recognition of plural and incestuous unions as marriages? Is it desirable that an inherently and profoundly immoral relationship that denies the rights of children be permanent?

Does the provision of a marriage license to boundary-less, criteria-less relationships magically create permanence, fidelity, and stability? Or is sexual complementarity the origin of these attendant features? Does the need for permanence, fidelity, and stability emerge from the very nature of marriage—an intrinsic nature that the Left denies exists even while (publicly) affirming that the twoness of marriage is intrinsic and non-negotiable?

This pernicious SCOTUS decision also provides evidence that the moral arc of America—at least with regard to marriage—bends not toward justice, wisdom, or morality but, rather, toward perversity and injustice. Liberals are once again on the shameful side of history and will once again foment cultural conflict and human suffering.