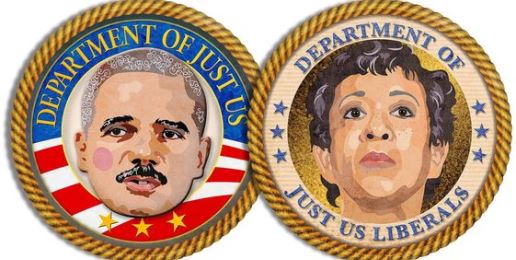 Eric Holder and Loretta E. Lynch have been perhaps the most flagrant partisans ever to hold the office of attorney general.

Year after year, they rubber stamped whatever the Obama administration wanted to do, legally or otherwise.

So it was an eye-roller when Senate Minority Leader Chuck Schumer, New York Democrat, announced Thursday why he was going to vote against fellow Sen. Jeff Sessions’ nomination for U.S. attorney general:

“I am not confident in Sen. Sessions’ ability to be a defender of the rights of all Americans, or to serve as an independent check on the incoming administration,” Mr. Schumer said.

“Rights of all Americans?” “Independent check?”

The attorney general, who heads the Justice Department, takes an oath to enforce federal laws and uphold the Constitution. We’re at the tail end of an administration in which the highest legal office in the land was weaponized along racial lines and openly attacked laws that the progressive left disliked, such as the federal Defense of Marriage Act and state voter ID statutes.

Under Mr. Holder, the Justice Department looked the other way as the Internal Revenue Service harassed tea parties and conservative groups. He aided and abetted the administration’s violations of labor law, environmental law and provisions of Obamacare again and again. He ignored the Federal Communications Commission’s unconstitutional seizure of authority over the internet. He actually sued states for helping to enforce federal immigration law.

This past May, the Justice Department joined the Department of Education in issuing a bizarre reinterpretation of Title IX and ordered schools to allow biological males identifying as females to access girls’ bathrooms and locker rooms.

Under Mr. Holder, the department stonewalled congressional investigations into the Fast and Furious scandal, in which federal agents inexplicably provided guns to Mexican drug cartels, including a weapon that killed a federal agent.

Finally, the Justice Department’s and FBI’s mishandling of the Hillary Clinton email scandal is in a class by itself, epitomized by Ms. Lynch’s meeting with Bill Clinton aboard a plane at the Phoenix airport supposedly to discuss their grandchildren. Right.

Ultimately, the “independent check” on any administration is supposed to be the Fourth Estate, that is, the media. This presents us with a problem. The media are not remotely independent or fair, as was glaringly evident during the presidential campaign and continues to be the case as they brazenly try to sabotage the Trump administration before it even begins.

On the morning of the second day of the Senate Judiciary Committee hearings on Sen. Sessions’ nomination, the major TV networks played up charges of racism leveled at him by fellow Democratic New Jersey Sen. Cory Booker and Rep. John Lewis, Georgia Democrat.

Here’s “Good Morning America’s” Mary Bruce: “Thirty-one years ago before the same panel, Sessions was rejected for a federal judgeship over concerns he made racist remarks. Those are charges he has passionately denied … Senator Cory Booker says he has to speak out because Sessions’ comments are a call to conscience.”

“Absent from any of the network coverage was the fact that Cory Booker worked with Jeff Sessions in 2015 to introduce legislation to honor demonstrators who participated in the 1965 civil rights march in Selma, Alabama,” notes the Media Research Center’s Kyle Drennen. “At the time, Booker said he felt ‘blessed and honored to have partnered with Senator Sessions’ on the matter.

“When it came to John Lewis’ upcoming testimony against Sessions, the morning shows seemed to forget that Sessions held hands with Lewis as the two walked across the Edmund Pettus Bridge in 2015 as part of a march commemorating the 50th anniversary of the same march from Selma to Montgomery Alabama.”

Regardless of the ginned-up hysteria, complete with demonstrations by left-wing zealots inside the committee room, Sen. Sessions presented himself with dignity and grace.

When the Alabama senator takes the reins, the Justice Department will once again be worthy of its name.

Robert Knight
Robert H. Knight, Executive Director and Policy Expert, has been a journalist for 15 years, including 7 as editor/writer at Los Angeles Times. He holds a B.S. in Political Science from American University, 1973 and a M.A., Political Science; 1975 American University, and a Media Fellowship, 1989-1990 Hoover Institution, Stanford University. He has also held senior positions with the Heritage Foundation, Family Research Council, Concerned Women for America, Media Research Center, and Coral Ridge Ministries. He has authored three books and hundreds of reports, papers and articles....
Full bio and more from Robert Knight
b
a
x
r