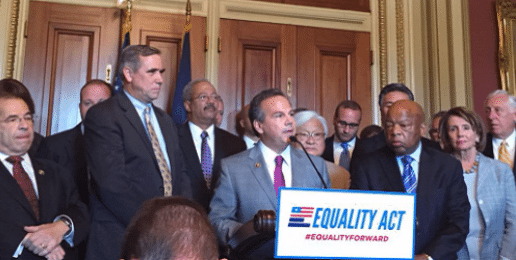 It’s called the Equality Act (H.R. 3185), which was introduced by liberal Democrats in the U.S. Senate and U.S. House.

Linda Harvey of Mission America says homosexual activists were pushing the Employment Non-Discrimination Act – until it reached a stalemate in Congress. She says the Equality Act accomplishes the same thing but goes much farther: it would amend the 1964 Civil Rights Act to make homosexuality and gender identity “civil rights” under U.S. law.

The goal, Harvey claims, is to “greatly expand” the rights of homosexuals to mirror employment and housing protections for minorities.

The Human Rights Campaign seems to agree with Harvey. On its website, the homosexual lobbying group claims that the June “victory” via the U.S. Supreme Court, which overturned state marriage laws nationwide, did not do enough for homosexuals.

“In most states in this country,” HRC proclaims on its website, “a couple who gets married at 10 a.m. remains at risk of being fired from their jobs at noon and evicted from their home by 2 p.m.”

If the bill becomes law, Harvey predicts homosexuals would be legally shielded the same way that minorities are protected by federal law.

And she has another prediction, too.

“This way they’re going to be teaching homosexual behavior at the earliest stages,” she warns, describing a push for “civil rights” for gender-confused children even in elementary school.

If it passes, Harvey contends the Equality Act will become “the homosexual agenda on steroids.”

The so-called “Equality Act” would quash the civil rights of conservative people of faith.  This onerous legislation specifically limits the ability of people who object to its requirements from seeking accommodations based on their religious beliefs in natural marriage. Thus, in the battle between special rights for homosexuals and freedom, the Equality Act strips conscientious objectors of their freedom and would, by law, require their compliance with the LGBT agenda.

This article was originally posted at OneNewsNow.com.