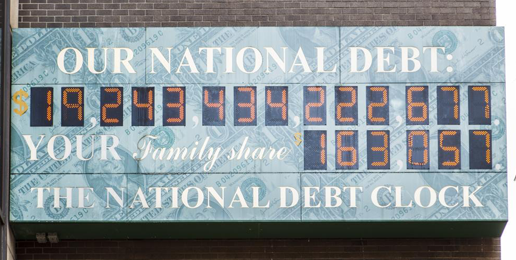 Well, it’s not breaking news, but it’s worth noting as President Donald Trump and Congress spar over spending that the national federal debt exceeds $20,000,000,000,000 and is rising by the minute.

We’re using zeroes here instead of spelling out “trillion” to help get across the enormity of this liability that we are piling onto our children and grandchildren.

Equally sobering is a visit to the USDebtclock.org, which tracks our rising debt at dizzying speed.  Introduced on Feb. 20, 1989 by New York real estate magnate Seymour Durst, the U.S. National Debt Clock began by reporting a national debt of “only” $2.7 trillion.

By 1991, it was ticking upward at $13,000 per second. “The amount began accumulating so fast that the last seven digits became totally illegible,” Time magazine reported.

The clock, which was mounted on a building near 42nd Street in Manhattan, stopped in 1995 during a government shutdown (see, gridlock is good). That was the same year Mr. Durst died.  The clock got going again under his son Douglas, but broke in 1998 when its computers couldn’t handle the total of $5.5 trillion.

With new hardware, the clock continued to tick upward until September 7, 2000, when it actually began going backwards due to the wonderful fact that the national debt began decreasing.   If you’re a Democrat, you’re quick to credit the Clinton administration.  If you’re a Republican, you credit New Gingrich and the GOP Congress for slapping a lid on Clinton’s plans to spend us into oblivion.  Since deficit spending is catnip to Democrats, the second scenario makes the most sense to me.

Anyway, that blessed period ended with the dot-com crash and the economic fallout from 9/11, and the Durst Organization cranked the clock back up in 2002.

By 2008, they had to revamp it yet again, adding a digit, because the Bush Administration had nearly doubled the debt to $10 trillion.  Over the next eight years, the Obama Administration’s annual deficits (with the Republican House’s complicity from 2011 on and the full GOP Congress from 2015 on) managed to double it again.  As of this week, the national debt is cruising beyond $20.6 trillion.

If we keep doubling this thing, it will eat every last penny earned by anyone within a fairly short period.  Ever hear about the grains of wheat on the chessboard, where you double the number on each square? Before you can say “compassionate conservatism,” the thing is out of control and into the zillions.

Except for diehard statists who can imagine no reason to limit the size of government, the good news is that there is a growing consensus that the government, especially in Washington, is too big.  Too complicated. Too powerful.  Too expensive.

The federal goliath has not just stretched its constitutional limits but has busted through them like an Abrams tank through linen.

Frank Zappa, the late rock star with an acerbic wit, once was asked what he thought of the federal government. “I think they’re trying to take over the country,” he said without an ounce of irony.

Like a giant vacuum cleaner on the Potomac River, Washington has sucked up treasure and authority from the rest of the nation and wants more.

President Trump is busily trimming back federal regulations and agency personnel, but it will take a lot to get us back to where we are a semblance of a constitutional republic with a limited government.

Meanwhile, the National Debt Clock keeps humming away near Times Square for anyone who wants to see why the debt for each individual taxpayer exceeds $170,000 and the total debt per family is upwards of $800,000.

The clock is right next to the entrance of an office of the Internal Revenue Service.  “We thought it was a fitting location,” Douglas Durst told Time magazine.

As tax season gets into high gear, it’s worth visiting the clock. It helps us understand why federal elections are slated as far from April 15 as possible.