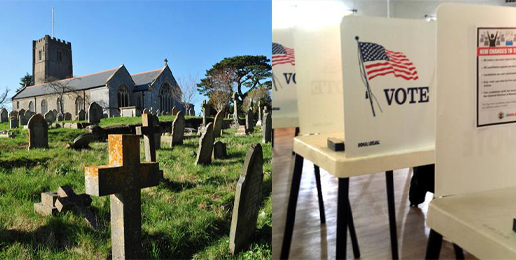 They claim creating an election integrity commission is a way to advance voter suppression.

Progressives are in an uproar over the Presidential Advisory Commission on Election Integrity, and we have to ask why?

Why not look into ways to protect our elections from fraud?

Because to do so would advance “white supremacy,” according to Democratic U.S. Senate Minority Leader Charles Schumer of New York, who tweeted on Aug. 24, that “If the president wants to truly show that he rejects the discrimination agenda of the white supremacist movement, he will rescind the Executive Order that created this commission.”

Then, he warned, “And if the president does not act, the Congress should prohibit its operation through one of the must-pass legislative vehicles in September.”

Wow. So, the Democrats would shut down Congress in order to keep a blue-ribbon panel from studying the vulnerabilities of our election process? Mr. Schumer must truly fear this commission. He wants it to disband even before its second official meeting on Sept. 12 in New Hampshire.

“The Ku Klux Klan and its sympathizers at all levels of government denied black Americans the right to vote for decades,” Mr. Schumer continued in his tweet without a hint of irony. The Klan was the militant wing of the Democratic Party, which enforced Jim Crow laws against black people for 88 years. More on that later.

“Today, voting rights are once again under assault,” the senator bleated, er, tweeted. “The misguided Shelby County v. Holder Supreme Court decision gutted the Voting Rights Act, opening the door to the same voter suppression tactics that existed before the Voting Rights Act was passed in 1965.” He means back when Democrats ran the show in the South.

Instead of Jim Crow, the Democrats rely today on the bureaucratic behemoth created under Lyndon Johnson’s Great Society, which shattered the black family and still keeps blacks and other minorities beholden to the Democrats’ federal welfare plantation. They just have to keep promising more and more stuff to the Free Stuff Army. Who needs the Klan when you’ve got Uncle Sugar? But, what does chronic dependence do to people’s souls? Hey, don’t be getting all religious on me.

Mr. Schumer was not the first Democrat to cry that the sky would fall. Former Attorney General Eric Holder called the new commission “another frightening attempt to suppress the votes of certain Americans.” This kind of balderdash is not harmless. Commission members that I have talked to have reported harassment and even death threats.

Mr. Schumer equates any and all election integrity measures such as voter ID laws as brutal instruments designed to “suppress” the votes of minorities, the elderly and the young. In fact, minority voting has increased following passage of voter ID laws. Perhaps folks have more of an incentive to vote when they know their ballots will actually count.

Mr. Schumer contends that vote fraud is a myth cooked up to advance voter suppression.

This is a serious charge, and nobody knows better how to go about suppressing voters than the Democratic Party, which benefited from it for nearly nine decades with its Jim Crow system before congressional Republicans rammed through the Civil Rights Act of 1964 and the Voting Rights Act of 1965.

But back to the original question. Why not have a bipartisan panel of experts make sure that election officials are doing their jobs to ensure fairness and integrity? Indeed, if you think vote fraud poses no threat, why oppose a study that might prove your point? If the panel comes up empty, you get to crow. But if it exposes sloppy practices that enable fraudulent voting, shouldn’t you want to know that and clean up the mess?

Progressives crowed that some liberal state officials initially refused to provide voter data to the commission. But as of now, virtually all states are complying with the request, having been told by their attorneys that it is entirely lawful, especially since the data are already in the public realm and commercially available. What? You hadn’t heard from the media that the states are now cooperating?

Here’s one more thing to consider: All of the allegedly vulnerable identity groups: minorities, elderly, the young — strongly favor voter ID laws, since, like everyone else, they don’t want their votes stolen by someone casting a fraudulent ballot. Survey after survey shows it.

So, I think I know what’s behind the Democrats’ fear of the election integrity commission: They have already lost the argument over voter IDs. In its eventual report, the commission will be making the case for how to ensure accurate voter registration rolls. And, accurate voter rolls prevent vote fraud.

If that isn’t frightening to a liberal, nothing is.

This article was originally posted by The Washington Times.