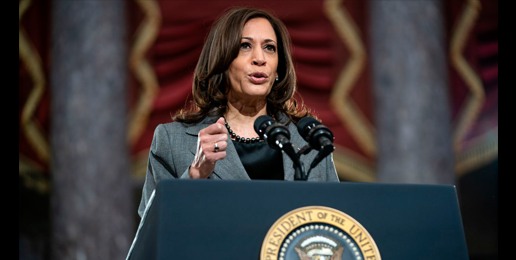 Kamala Harris: The Vice President Who Will Live in Infamy
Written By Laurie Higgins   |   01.07.22
PRINT

President Boris Badenov and his prickly assistant Vice President Natasha Fatale have devised yet another inept scheme to try to salvage their feckless administration. They decided to pretend that the Jan. 6 riot at the Capitol was analogous to the Japanese attack on Pearl Harbor and the coordinated Islamist attacks on 9/11. Boris and Natasha hope Americans will be so beguiled by these analogies that they will turn their attention away from the insuperable failures of the Badenov administration.

Further, Boris and Natasha are using the unfortunate Jan. 6 riots to inflame a race conflagration their party started and fuels in order to secure the votes of persons of color, especially blacks. They’re counting on Americans of color not looking too closely at how Democrat policies have ravaged impoverished communities.

Certain dates echo throughout history, including dates that instantly remind all who have lived through them—where they were and what they were doing when our democracy came under assault. Dates that occupy not only a place on our calendars, but a place in our collective memory. December 7th, 1941. September 11th, 2001. And January 6th, 2021.

I’m likely not alone in remembering exactly where I was when radical Islamists hijacked planes twenty years ago, killing 2,977 innocent people, including 8 children, and wounding 6,000. I have no idea where I was when the shameful U.S. Capitol riots took place one year ago, during which no rioter/trespasser killed a single person.

On that day, I was not only Vice President-elect, I was also a United States Senator. And I was here at the Capitol that morning, at a classified hearing with fellow members of the Senate Intelligence Committee. Hours later, the gates of the Capitol were breached.

I had left. But my thoughts immediately turned not only to my colleagues, but to my staff, who had been forced to seek refuge in our office, converting filing cabinets into barricades.

Take note, Harris wants the nation to know that she wasn’t concerned about the welfare of only her elite colleagues but also her lowly staff.

As the “gates” were “breached,” her staff sought “refuge” behind their filing cabinets. Sounds exactly as I imagine sailors doing on Dec. 7, 1941. Her staff need not have worried. Although Harris had already left, she was doing what Congressional leaders do best: She was thinking about her staff, quivering as they awaited certain death.

What the extremists who roamed these halls targeted was not only the lives of elected leaders.

What they sought to degrade and destroy was not only a building, hallowed as it is. What they were assaulting were the institutions, the values, the ideals that generations of Americans have marched, picketed, and shed blood to establish and defend.

How does Natasha know the insurrectionists/terrorists/enemy combatants “targeted” the “lives of elected leaders”? Wait! Could she have been colluding with them?

What enrages many Americans is how differently hypocrites like Harris treat January 6th as compared to the months of rioting, arson, looting, and assaults on American institutions, values, ideals, and law enforcement officers committed by Antifa and BLM in 2020. Harris even urged Americans to contribute to a fund to bail out of jail those who assaulted that which “generations of Americans have marched, picketed, and shed blood to establish and defend.” Harris tweeted this in June 2020:

If you’re able to, chip in now to the @MNFreedomFund to help post bail for those protesting on the ground in Minnesota.

Harris, second-in-command of the party committed to court-packing, illegal immigration, voter fraud, and filibuster-busting, and fervent supporter of setting leftist criminals free, apparently doesn’t see the irony in this statement

On January 6th, we all saw what our nation would look like if the forces who seek to dismantle our democracy are successful. The lawlessness, the violence, the chaos.

Suddenly Harris cares deeply about the U.S. Constitution, the First Amendment, and the rule of law:

What was at stake then, and now, is the right to have our future decided the way the Constitution prescribes it: by we, the people — all the people.

We cannot let our future be decided by those bent on silencing our voices, overturning our votes, and peddling lies and misinformation; by some radical faction that may be newly resurgent but whose roots run old and deep.

If she’s truly committed to the U.S. Constitution, maybe she should encourage her party to stop attacking the Second Amendment. If she truly opposes the silencing of voices, maybe she should encourage her fellow leftists to stop canceling speaking engagements, stop trying to get people fired for expressing their views on race and sexuality, and stop trying to force Americans to use Newspeak when referring to men and women. If she believes the “strength of democracy is the rule of law,” then as the border czar, maybe she should try to stop border lawbreaking.

Next came one of the central goals of the Badenov administration, -the only hope Dems have for winning elections in 2022 and 2024:

And the work ahead will not be easy. Here, in this very building, a decision will be made about whether we uphold the right to vote and ensure free and fair election.

Let’s be clear: We must pass the voting rights bills that are now before the Senate. …

Who knew suffrage was under assault right now in the U.S. Capitol?

Democrats, practiced at the art of deception—particularly through the redefinition of terms—have redefined efforts to ensure free and fair elections and reduce voter fraud as racist efforts to suppress the black vote. They’re doing this, not to help communities of color, but to help Democrats maintain their positions of power.

But increasing numbers of blacks and Latinos now see the Democrat charade of altruism for what it is: a selfish, grasping effort to acquire more power for an entrenched bureaucracy who have little to no regard for those who have trusted them and given them that power for decades even as their communities of color die.

Black and brown communities see that Democrats have destroyed their babies, their families, their communities, and their schools.

They see the decaying and dangerous communities that fatherless boys create.

They see that wealthy, powerful Democrats send their children to the most expensive private schools in the country while denying educational choice to families trapped in dangerous, poor-performing urban schools with union teachers who refuse to work.

They see wealthy powerful Democrats aiding and abetting lawless border crossing in order to import votes. And persons of color know that it will be their urban communities that will suffer most from illegal immigration, while the wealthy and powerful are inoculated from the worst of those effects.

Yes, Americans of color see that Democrats spread government money to buy votes. They see the division Democrats sow in order to grow their power and the lies they tell to maintain it.