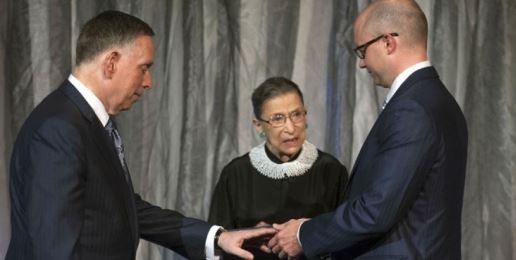 Justice Who Loves Gay Marriage May Force it on Those Who Don’t
Written By Charlie Butts   |   05.21.15
PRINT

A conservative legal organization is calling for Supreme Court Justice Ruth Bader Ginsburg to recuse herself from deciding the marriage case now before the court.

“A judge should avoid the appearance of impropriety as much as possible,” says Roger Gannam, senior counsel with Liberty Counsel.

Ginsburg, a far-left justice, had conducted five same-sex marriage ceremonies before the high court heard the landmark Obergefell v. Hodges in April. A ruling is coming in June.

More recently, Ginsburg presided over the so-called marriage of two men in Washington, D.C., reportedly emphasizing the word “Constitution” in the ceremony to the delight of  ttendees.

Gannam complains that Ginsburg is an “activist” for same-sex marriage rather than an impartial justice while the Supreme Court, he points out, is weighing the future legal definition of marriage in the United States.

He also points to statements Ginsburg made last February to the press on the subject.

OneNewsNow reported last September that Ginsburg praised the “genius of the Constitution” for allowing her to preside over her first homosexual ceremony in 2013.

That praise apparently only goes so far. A year before that ceremony, Ginsburg told Egyptian legal scholars that they should pattern that country’s constitution on others around the world, not the one in the United States she would later describe as “genius.”