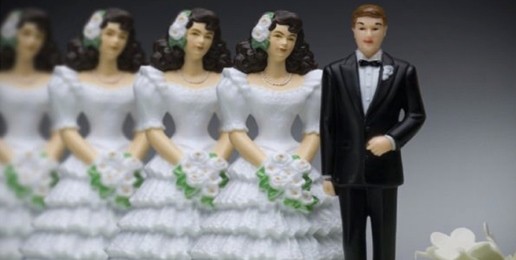 Immediate Calls for the Further Unraveling of Marriage
Written By Micah Clark   |   07.11.15
PRINT

One day after the [Obergerfell v. Hodges] ruling, I received a press release from Pro-Polygamy.com  one of the largest Polygamy groups east of the Mississippi, located in Maine.  Their slogan is “Polygamy: The Next Civil Rights Battle.”   Last Sunday they followed up with another release of an editorial.   Both items complain, “all that Kennedy declared about the importance of marriage to those who choose same sex marriage (SSM) equally applies to others who choose unrelated consenting adult polygamy (UCAP).”

Mark Henkle of Pro-Polygamy states, “for UCAPs, only one obstacle to freedom remains to be overcome – the outstanding bigotry of big government still unconstitutionally mandating an arbitrary determinant of “two-person unions” for the definition of marriage. After that, polygamy will be included.”

Numerous commentators, and even Justices John Roberts and Samuel Alito, have also noted that the SCOTUS ruling contains no logical basis for prohibiting polygamy or practically any other limit on marriage. This supports the comment in my media statement that, “if marriage can mean anything, it ultimately means nothing. When marriage loses its meaning, society and children suffer.  When children suffer, government expands. When government expands, liberty contracts.”

By the way, homosexuals, bisexuals, polygamists, the polyamorous, are not the only ones looking for societal approval based upon sexual orientation.  This article on the blog of former U.S. Congressman Allen West referencing a more detailed and disturbing article from the Northern Colorado Gazette says there is a quietly growing group of “experts” claiming that pedophilia is a sexual orientation worthy of special rights and recognition.

One such group is the Institute for the Advanced Study of Human Sexuality in San Francisco. The IASHS lists, on its website, a list of “basic sexual rights” that includes “the right to engage in sexual acts or activities of any kind whatsoever, providing they do not involve nonconsensual acts, violence, constraint, coercion or fraud.” Another right is to, “be free of persecution, condemnation, discrimination, or societal intervention in private sexual behavior” and “the freedom of any sexual thought, fantasy or desire.” The organization also says that no one should be “disadvantaged because of age.”

For all practical purposes, the tax-funded sex education/abortion giant, Planned Parenthood, has made similar statements in defense of their school programs for years.