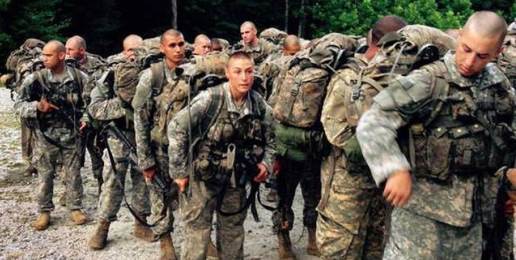 Some may remember the ecstatic press accounts of the first two women, Capt. Kristen Griest and 1st Lt. Shaye Haver, to make it through the grueling Army Ranger School. Well, here’s what former Marine Jude Eden shares in an article in Crisis Magazine about their headline-grabbing accomplishments:

The females who graduated Ranger School were given additional training and recycled at least twice through each phase where men are only allowed two recycles—at most—over the whole program. The third graduate got three recycles in at least one phase of Ranger School. Their graduation was planned in advance and the Army shredded their records less than a month after. Those records are usually kept for one to two years at the least, but the Army saw fit to destroy them for these individuals. Their graduation was presented as proof that women are just as capable as men of succeeding at combat. The reality was quite different, but why let the truth get in the way of a good story?

People magazine provided some illuminating details about the extra assistance offered to these women in the furtherance of “equality” and to ensure that at least one graduated:

A close look at a troubling Marine Corps’ study on the integration of women into the combat arms reveals what  common sense formerly revealed to reality-affirming people and may throw a wet army blanket on combat sex-integrationists’ celebration:

Starting in the 1960’s, reality-denying sexual revolutionaries began building a wall between common sense and nonsense. On the common-sense side of the wall now live a remnant of marginalized humans who still know what women and men are and that they are different. On the nonsense side live those who can’t tell the difference. Maybe the commonsensers can crowdfund a campaign to airdrop flyers with excerpts from the Marine Corps study into the Land of Nonsense.

Last December, Defense Secretary Ash Carter opened up all combat positions to women, including Navy SEALS and Army Rangers, refusing a request from the Marines for an exemption that would allow “infantry, machine gunner, and fire support reconnaissance” positions to remain “men-only.” No vigorous congressional debate complete with research-based evidence proving that such a radical change will not compromise military effectiveness. No siree.  Just another feckless fiat from the Obama Administration.

In February, Army Chief of Staff General Mark Milley, and Marine Corps General Robert Nelle testified before a U.S. Senate Armed Services Committee, stating that they believe women should be required to register with the Selective Service (SS) upon turning 18.

In April, two Republicans, U.S. Representatives Duncan Hunter (R-CA) and Ryan Zinke (R-M)—whose daughter is a Navy diver—introduced the “Draft America’s Daughters” amendment to the National Defense Authorization Act (NDAA) for 2017.  They introduced the amendment only to spark congressional debate—not because they support women in combat or requiring them to register for the SS.  This ill-conceived maneuver resulted in the House Armed Services’ Committee passing the amendment 32-30. If it weren’t for six Republicans (Walter Jones [R-NC], Chris Gibson [R-NY], Joe Heck [R-NV]), Sam Graves [R-MO], Martha McSally [R-AZ], and Steve Knight [R-CA]) voting with Democrats, the amendment would not have passed.

In May, the U.S. House stripped the language that would have required women to register for the SS from the defense bill.

Eden identifies the purpose of the SS and why the politically motivated effort to require women to register ill-serves the country:

SS registration exists in order to induct “combat replacements” in a large-scale national emergency. It is not to fill desk jobs and support roles, it is to replace infantrymen who are dying by the thousands at the sharp end of our military spear….Where adding women palpably degrades combat effectiveness and adds significantly more risk and liability, there is no decent reason to draft women. The draft, like integrating combat units, is about the needs of the military, not equal career opportunity.

In this unstable time during which threats to national security are diverse and many, Eden reminds us of the importance of an effective military—something that is ill-served by nonsensical, futile efforts to pretend that men and women are the same.

Take ACTION: U.S. Senate debate on the NDAA, including on Sen. Lee’s amendment, is taking place this week. Please click HERE to send an email or fax to both U.S. Senators Dick Durbin and Mark Kirk as well as your local U.S. Representatives to tell them not to draft our daughters.