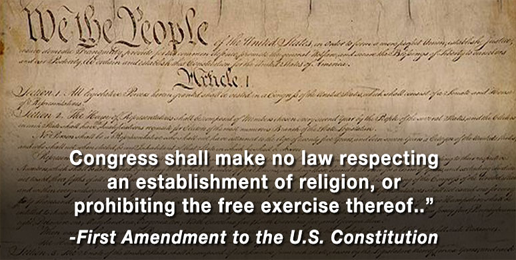 Government Must Support and Encourage Free Exercise of Religion, or Fail
11.11.20
PRINT

Our founders were so sophisticated in their understanding of religion and civil government, that they secured this critical inalienable right given by the Creator to all mankind, as the very first freedom to be protected by the U.S. Government.

Our Constitution was made only for a moral and religious people.
It is wholly inadequate to the government of any other.
~John Adams, 2nd President of the U.S.A.

This is why the Illinois Family Institute has joined a friend of the court (“amicus”) brief supporting Catholic Social Services in Fulton v. City of Philadelphia, 922 F.3d 140 (3d Cir. 2019), just argued before the Supreme Court of the United States.

The City of Philadelphia wants same sex relationships to be universally accepted, regardless of religious belief, and has therefore prohibited foster children from being placed with a Catholic organization that has been serving children in this way for 223 years, because their religious practice prevents them from placing children with same-sex couples.  Though, incidentally the organization never actually refused a same-sex placement. They refer them elsewhere.

At the federal level, the courts generally enforce the First Amendment by requiring 1) a compelling government interest, and 2) the least restrictive means narrowly tailored to actually achieve that interest before allowing a government to infringe Constitutional rights. This is referred to as the strict scrutiny test.

While it has generally been accepted since the ratification of the 14th Amendment that the federal government would also defend rights enumerated in the U.S. Constitution against the actions of State and local governments, the U.S. Supreme Court in Employment Division v. Smith, 494 U.S. 872 (1990), reduced this protection by ruling that government actions not targeted specifically against religion, or those called “generally applicable,” do not prohibit the free exercise of religion.

This has enabled state and local governments to tailor laws to limit the free exercise of religion by simply outlawing religious practices that they dislike, for everyone, rather than just those who are acting based upon their faith. This has resulted in numerous states passing “Religious Freedom Restoration” laws to reinstate the previous level of judicial scrutiny.

Such limitation of religious liberty is exactly what happened in Fulton.

This is also why Illinois churches’ federal lawsuits against being forced to close during the COVID-19 pandemic fell on deaf ears in the federal courts.

With the new Court make-up (already relevant, as it had refused to even hear similar cases prior to the appointment of Justice Amy Coney Barrett), there is a possibility of overturning Employment Division, and reinstating a test which would prevent such government prohibitions of exercising religious faith.

What this case is really all about, is giving government the ability to silence the Church, and thereby God, and the Word of God on issues of right and wrong.

The political left desires to replace the current United States Republican form of government with the political philosophies of Karl Marx in the Communist Manifesto (referred to more gently as “socialism” by Democrat politicians such as Bernie Sanders).  Removing the Church’s ability to influence the culture’s understanding of right and wrong is a key element needed to effectively marginalize true religion and make it irrelevant.

This is why Democrats appoint activist judges who will re-write the Constitution to suit their contemporary ideology, and why they now desire to continue that practice by adding more judges to the High Court.

Pray with us that our Creator who holds this Court and this Country in His mighty hand, will guide the Court to protect true religion and His Church, the indispensable foundation of this great Nation!

PLEASE PRAY: Pray for God’s mercy on our nation as we await the results of President Trump’s legal challenges to election results. In 2000, it took 37 days to figure out the “hanging chad” dilemma. We must be patient. In the meantime, please pray that any and all corruption would be exposed.

Please consider a donation to IFI as we stand boldly in the public square.