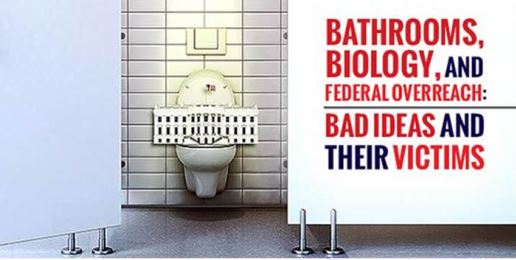 The last two weeks have been, of all things, about bathrooms. First, the U.S. Department of Justice notified the state of the North Carolina that HB2, or the bathroom law, violated the Civil Rights Act. Now to be clear, HB2 requires people to use public bathrooms and locker rooms that correspond to the sex listed on their birth certificate. Note the word “public.” The law allows businesses to determine their own bathroom policies. And, individuals who have undergone sex reassignment surgery can have their birth certificate changed to reflect their transition.

But according to Attorney General Loretta Lynch, the common sense protections of HB2 is akin to Jim Crow laws. Sex specific restrooms are like segregated restrooms, water fountains, entrances, and lunch counters of the racially segregated south.

Then on Friday, lest we think North Carolina is an isolated case, Obama administration officials — specifically the assistant secretary of education for civil rights and the head of the Civil Rights Division of the Justice Department — directed schools, including “all public schools and most colleges and universities that receive federal funds,” to — as the Washington Post described it — “provide transgender students with access to suitable facilities — including bathrooms and locker rooms — that match their chosen gender identity.”

Schools that fail to comply with this edict from on high are, the officials announced, in violation of Title IX, the federal sexual anti-discrimination act, and would therefore — you guessed it — risk losing federal funding. Comply or you don’t get the money. It’s ideological extortion, not policy making. Please visit BreakPoint.org and we’ll link you to a legal analysis of this decree from our friends at Alliance Defending Freedom.

So how should Christians respond? We have to start by understanding the issues at stake. Did you catch all the references to civil rights in these stories? Transgender rights, like gay and lesbian rights before them, have been placed in the historical narrative of overcoming discrimination and bigotry. We aren’t dealing with just a policy issue; we’re dealing with a fundamental view of what it means to be human.

Also, many have long pushed to separate concepts of sex and gender. Sex is how you were born, they say, but gender was self-determined and therefore flexible. But in citing the Civil Rights Act, the administration is saying that the right of self-determination is sacred, akin to non-chosen traits such as ethnicity and race. And by citing Title IX the administration is going even a step further, saying that sex discrimination legislation now applies to gender. In other words, our biological sex should be considered as malleable as our conception of our genders.

Now if all of this sounds like a strange exercise in denying reality, well, it is. That’s the power of worldview. Like prescription glasses, worldviews will either clarify reality or distort reality. The ideas at work here are reality-denying.

Here’s an example of what I mean by reality-denying. Again quoting Attorney General Lynch, “None of us can stand by when a state enters the business of legislating identity and insists that a person pretend to be something or someone they are not.” Now in light of Friday’s edict, who exactly is legislating identity and insisting that persons — now school children across the nation — pretend to be something they’re not?!

You’ve heard us say on BreakPoint ideas have consequences, and they certainly do. But we must also say ideas have victims.

In this case, an edict advancing the sexual revolution will make victims by granting special rights to the few while trampling the rights of the rest. And those who resist will be victims of name-calling and public shaming. And precious, gender-confused children, taken deeper into their confusion, will be made victims of our illusions of moral progress.

This article was originally published on Breakpoint.org