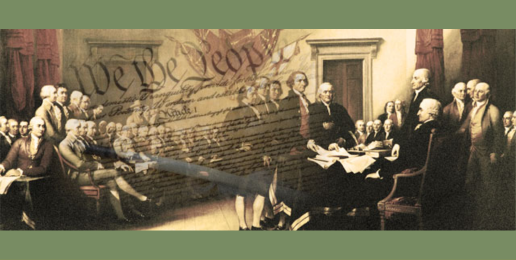 All of America’s legislative bodies should voluntarily change their rules to increase voting requirements for passing legislation to a super-majority.

Readers may ask, “Why such a bold proclamation?”

The answer is that democracy was an already known form of government that our founders expressly avoided. It was known to be an unstable form of government, leading to tyranny of a simple majority, anarchy, and ultimately some new form of (probably despotic) government to replace it.

Instead, they created a new, experimental form of government never before tried, which we now know to be the best, most free, and most successful ever devised. This is what we should expect, because “where the Spirit of the Lord is, there is liberty” (I Chronicles 3:17).

By implication therefore, where the Spirit of the Lord is not (e.g., particularly, Marxism, socialism, and communism, which expressly denounce religion, and thereby God), there cannot be liberty.

The United States government is a republic, consisting of the Constitution, the people, and elected representatives.

This Republic is expressly instituted among mankind to secure certain unalienable rights endowed by Our Creator.  Government’s just power is to be derived from the consent of the governed (see Declaration of Independence, Preamble).

This Creator is and was understood to be, the person Jehovah of the Christian Scriptures (aka The Bible), the same God followed by Abraham, Isaac, Jacob, David, and Jesus.

These rights include, but are not limited to, Life, Liberty, and the Pursuit of Happiness.

The only “democratic” element of this is incidental: that the most practical way to measure the consent of the governed is to elect the constitutional representatives in government.

Our founders even expressly limited this by establishment of the Electoral College, by legislatures electing Senators, and by Senate representation being determined by State–all in order to ensure that consent of the governed was not by a simple majoritarian vote of citizens.

To be even more provocative, one might rightly characterize our republic, with right and wrong being based upon God’s fixed and objective law and expressly short-circuiting majoritarian principles, as undemocratic.

Article IV, Section IV of the Constitution requires that, “[t]he United States shall guarantee to every State in this Union a Republican (i.e., conforming to the definition of just government in the Declaration of Independence) Form of Government.”

Note that the United States isn’t required, or even permitted, to guarantee a Democratic (i.e., votes by majority) form of government.

While this provision hasn’t been applied well and has almost been relegated to complete unimportance, it is in fact the heart of the American republic, without which our government has been doomed to fail.

Both of our first two presidents, General George Washington and John Adams (using his precise quote) said that, “Our Constitution was made for a moral and religious people. It is wholly inadequate to the government of any other.”

Unpacking that statement, the people whose consent is arguably the main part of the Republic, must be both moral (obeying right and wrong) and religious (worshiping Jehovah). The Constitution (and the republic it defines) is not adequate for government in absence of primarily this sort of people.

Imagine this inadequacy by the analogy of a vehicle purchase. A Cooper Mini is inadequate for a family of 10.  Inadequacy means not fit for the purpose.

Unlike the founders, who intentionally made central government inconvenient and ineffective, our adoption of simple majority requirements in legislative bodies implies that we think (enormous) central government is important and crucial to our day-to-day lives.

The U.S. Congress, and every state could do almost nothing better than to require two-thirds or three-fourths majorities for every vote they take. As is often said, “the opposite of Progress is Congress.”

This action will require all political parties, constituencies and factions to agree, or no laws will be passed.

If our elected representatives are not capable of near-consensus upon lawmaking, then the best thing to do is to make no new laws.

As Hippocrates famously said, “first, do no harm.”

Down with democracy! Vive la République!  Vive la Liberté!  No King but Jesus!