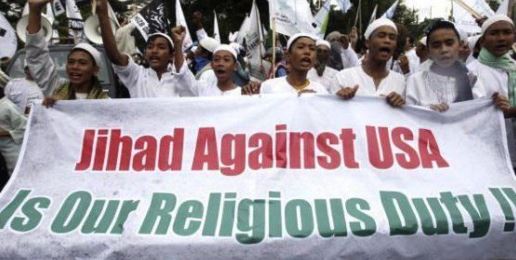 According to a recent poll from The O’Leary Report and WND that was conducted by Zogby Analytics, roughly two out of three registered voters in America are against the Obama administration providing taxpayer funds to Arab nations that are considered anti-Christian through their laws and treatment of believers.

Visiting the exact verbiage presented before the poll’s participants, they were asked, “Do you agree or disagree that the United States should help certain Arab countries financially and militarily if their countries’ constitutions or laws make being a Christian or atheist a crime punishable by jail or even execution?”

An overwhelming 62.6 percent of respondents disagreed, contending that such funds should be withheld from governments supporting the persecution of Christians. A small fraction (16 percent) agreed that such should continue, while 21 percent couldn’t decide.

My hard-earned money’s going to what?

On a yearly basis, the U.S. federal government sends billions of taxpayer dollars to nations that are hostile to Christianity and uphold Islamic law via constitutional provisions.

“It means that Bible Belt southerners and others who regularly attend church are being taxed to pay for the persecution of Christians in other parts of the world,” explains WND’s Bob Unruh. “And it appears the vast majority of those who write the checks to the IRS are opposed to the distribution of funds.”

O’Leary Report President Bradley S. O’Leary asserts that Americans have spoken and consider it not to be in the country’s best interest to fund nations that support and harbor militant Muslims.

“According to the poll results, Americans are more politically opposed to military and economic aid going to Arab countries that have religious bias,” reports O’Leary, who authored Shut Up, America!, The Audacity of Deceit andAmerica’s War on Christianity.“The future in the Middle East will come not just from opposing Muslim extremists, but also opposing an Arab rule of law that doesn’t guarantee religious freedom.”

Results show that men are slightly more against subsidizing nations that enforce anti-religious laws (64.3 percent) than women (61.2 percent). On the other hand, 18 percent of men agreed about funding them, compared to just 15.2 percent of women.

However, there was a much more pronounced dichotomy among partisan lines on the issue.

The same goes for how American citizens view the funding when self-proclaiming themselves as adherents to particular political persuasions.

“One in four who self-identified as ‘liberal’ said they would send funds to nations where Christians are not allowed religious freedom, while only about 13 percent of ‘moderates’ would,” WNDs Unruh continued. “For those to identified as “conservative, that column included 14 percent. Of those who said they were conservative on social issues, only 3.5 percent said they would support sending such funds.”

Obama fueling the fire of terrorism?

On the average year, the U.S. provides foreign countries anywhere from $40─50 billion in aid, with numerous Arab anti-Christian governments on the receiving end.

An example of this was demonstrated in 2013, when it was reported that Obama was funding the government of Egypt while it was headed by the infamous Muslim group that has been internationally recognized as a terrorist organization.

This was covered in an article titled “Billion-Dollar Giveaway to the Muslim Brotherhood.” In it, the author pointed out how Obama’s described the “Arab Spring” as a “movement toward democracy,” calling his depiction nothing short of “ludicrous fiction.”

“Promising upwards of a billion dollars to such a regime is bad enough in its own context,” wrote Front Page Mag’s Arnold Ahlert. “That the Obama administration is seemingly oblivious to the timing of this announcement, as well as one regarding the Syrian giveaway, borders on surreal.”

To the surprise of many, Christians weren’t the demographic group in the poll most opposed to subsidizing anti-Christian governments.

On the other end of the equation, Hispanics were the only demographic group who supported U.S. tax dollars going to nations enforcing anti-Christian laws and policies, with 42 percent agreeing to such funding and only 32 percent of them opposing the aid.

The poll separated the demographic results even further.

“There wasn’t major variation with regard to region or income levels … about two-thirds opposed the funding and one-fifth endorsed it, with the remaining not sure,” WND reported. “Rural residents were most emphatic with their opposition, with 74 percent taking that stance.”

Results also showed that the older the respondents, the more opposed they were to funding anti-Christian regimes.

One small group out of the nearly 900 voters surveyed last month responded in a way not anticipated.

“Startlingly, there were dozens of people who responded to the poll who confirmed they had gone without food for 24 hours over the course of the past month ‘due to a lack of food or money,’” Unruh indicated. “Only 40 percent in that category would deprive Shariah nations of funding.”

From bargain shoppers to sharpshooters to Wall Street gurus, most Americans put a foot down to their tax dollars supporting pro-jihad nations.

“Wal-Mart shoppers oppose subsidies by significant numbers and those sympathetic to the tea party movement oppose the funding by a margin of 66.5 to 23.8 percent,” WND disclosed. “Sixty-one percent of gun owners said such subsidies were wrong, as did 65 percent of stock market investors.”