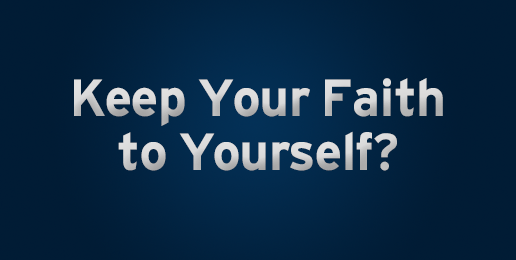 Growing numbers of voices are telling Christians “Keep your views to yourself!” “Stay out of the public square!” Well, what if we did?

Frank Capra’s classic Christmas movie “It’s a Wonderful Life” showed a despairing George Bailey, played by Jimmy Stewart, learning how the world would be without him. Well, perhaps we need a similar cinematic telling for all those currently telling Christians to stay out of the public square and to keep their thoughts about marriage, religious freedom, and the dignity of human life to ourselves. And maybe a few wobbly-kneed Christians need to see it too.

Just like George Bailey was stunned to discover what Bedford Falls would look like had he “never been born,” I think it may be similarly shocking to see what the world would look like today without Christianity’s influence.

For one thing, we wouldn’t have thousands of volunteers working in prisons to help incarcerated men and women return to their communities as productive citizens. We’d certainly see fewer hospitals and free clinics. After all, I’ve seen a lot of Baptist, Methodist, Lutheran, and Catholic hospitals, but I can’t remember any Buddhist, atheist, or New Age ones, or for that matter food kitchens, or rescue missions, or adoption agencies, or disaster relief organizations, or entrepreneurial training programs. And good luck sustaining free, public education to the millions of students once religious schools shut their doors. When Christians “keep it to ourselves,” everybody loses.

Though many in the media don’t get that point, New York Times columnist Nicholas Kristof does, and good for him. “In liberal circles,” Kristof recently wrote, “evangelicals constitute one of the few groups that it’s safe to mock openly. And yet the liberal caricature of evangelicals,” he continues, “is incomplete and unfair. But I’ve been truly awed by those I’ve seen in so many remote places, combating illiteracy and warlords, famine and disease, humbly struggling to do the Lord’s work as they see it, and it is offensive to see good people derided.”

To make his point, Kristof points to just one example. On a recent trip to the war-torn nation of Angola, he met medical missionary Dr. Stephen Foster, who has been working there—without the world’s acclaim—for 37 years. The white-haired doctor, who is now 65, has stood firm against six-foot cobras, enraged Marxist soldiers, and horrible health and working conditions. One of his sons contracted polio; a daughter survived a cerebral hemorrhage. As Kristof relates, his son Rob says, “For a while I blamed my dad and his high-risk dedication to others. Today . . . I am no longer bitter or resentful. If me getting polio meant that thousands of lives were either saved or immeasurably improved by my father’s work, then so be it.”

So we should keep our faith to ourselves?

Or consider those like Dr. Kent Brantley or other Christian medical professionals, who courageously fought and are fighting Ebola at great personal risk. Should they leave the public square and stop acting on the basis of their beliefs? Are the guardians of so-called “civil rights” willing to go in their place?

Now it’s true that sometimes we Christians undermine our witness by wrong words and deeds, but it’s also true that we’ve brought a lot more to our neighbors and communities than many folks realize.

A few years ago, for instance, a University of Pennsylvania researcher found that urban congregations, such as First Baptist in Philadelphia, provide millions of dollars in services to their communities in everything from marriage counseling, to helping people off drugs and alcohol, to providing K-12 education.

So like Bedford Falls and George Bailey, our society really will miss us if we are cowed into a privatized faith that keeps religion safely inside the four walls of our own churches. Christianity is not only to be believed; it must be lived—and not just for our own benefit, but for the good of our neighbors. And now of all times, we must increase our work of restoration in our communities. But that doesn’t mean be silent. Like Jesus, let’s be about the business of sharing it, both in word and in deed. Even when others tell us to keep it to ourselves.