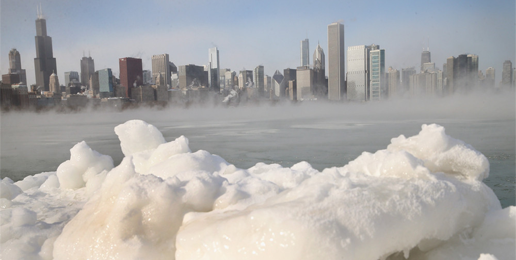 I am hearing that December was Chicago’s coldest month in about forty years. It was bitter! But it is not just this winter I feel is cold, it is winter in general. Having spent several years in Alaska as a boy, cold did not affect me much until recently, as my age caught up with me. Lately, I have been looking at winter a little differently, and realized that it is like an annual message from God.

Things have not always been this way, of course. In the first chapters of Genesis, we discover a canopy of vapor in the atmosphere over the earth rendering the entire globe a tropical paradise.  Apparently, it was a balmy 80 degrees everywhere. It is also likely that the vapor blocked much of the damaging rays from the Sun, giving the Earth’s inhabitants longer life.

But with mankind’s fall in Genesis 3, things changed, though the climate was not immediately affected. That alteration would come after a few generations when the wickedness of man reached the point that God could no longer allow it to continue.  In Genesis 6:5 we read that God saw that wickedness permeated mankind‘s every thought and deed.  Not so different from today!

So, God determined to wipe the slate clean, so to speak, and start again. But one man pleased God, the man, Noah, and his family; and because he pleased God, they were spared. But the flood that God brought upon the world changed everything, including the weather. With the elimination of the vapor canopy over the earth, the temperatures at the poles dropped radically, freezing animals that were not able to adapt. This explains how certain mammals have been found, frozen for thousands of years with greens undigested in their stomachs! The world turned cold quickly, a metaphor for the hearts of men without God. Cold and dead. (Have you noticed that with America’s turning from God there has been a corresponding coldness and hardening of hearts in the culture and politics?)

Now, instead of the verdant garden created for mankind to enjoy, the world turns cold and barren for a season each year, and at the poles is virtually uninhabitable, as a reminder of the consequence of our turning our backs on God.  He does not eliminate life in winter, but it certainly appears as though He did.  By His grace, for most of the planet, winter lasts only for a few months and is followed by the wonders of Spring; but it is an important reminder year after year that there is a greater “life cycle” of which we ought to be mindful.  In the realm of the spiritual, we are experiencing a long, bitter winter.  The oft-repeated question of the skeptics, “How could a loving God allow all the suffering that people experience?” is proof that the world is in a dark place, inexplicable if people are truly good at heart.

One could respond that the beauty of snow and the abundant winter activities available contradict my point, but those winter pleasures are merely a thin veneer over what is in reality stark and barren.  If you do not make adequate preparation or have a warm destination, low temperatures become your enemy. Hypothermia is a real threat and is not far from anyone inadequately dressed in cold weather; and foraging for food, even for the trained, becomes more difficult when the ground is covered by snow.

Interestingly, in Genesis 8:22, having destroyed every living soul other than those on the ark, God declared that He would never bring another flood upon the earth, even though man’s heart remained sinful. But He promised that while the world stands the cycles of the seasons would continue, “seedtime and harvest, cold and heat, winter and summer, and day and night. . . .” as if to remind us daily and seasonally that another day of accounting is coming.  No, He will not flood the earth again, but he does not want us to forget the reason behind the flood: our sinfulness, and our inescapable accountability to Him.

Even in Winter His grace is seen, but do not err in thinking that He is only grace, or as some false teachers declare, “Love wins out,” meaning we can live as we want.  Love will win, but only after God’s holiness is established across the globe, and sin is vanquished.  Mankind’s thousands-year-long winter will come to an end and be followed by God’s wonderful and eternal Spring, but only for those who have eyes to see and a heart to trust in Him.

The hysteria over “global warming” as it is perceived today is unwarranted, as God maintains control of such things; but the alarmists are correct in their assessment that earth’s climate must remain within certain limits to be hospitable to mankind.  It is finely tuned by its Creator, and Winter is not primarily for the skier, snowmobiler, or skater, but is a tersely worded message to remind us of our separation from Him.

C.S. Lewis understood the message of winter and used it to perfection in his novel, “The Lion, the Witch, and the Wardrobe.”  Winter may have its beauties, and some lament its passing, but if winter were all there was, the earth would die.  Thus, the world rejoices with the arrival of Spring each year, and those who love God look forward with anticipation and joy to the day He brings, and an end to the winter of our separation as He ushers in the Spring of His eternal presence.

The question facing every human is whether they have come to terms with God. He is perfect in every way and can tolerate no deviation from perfection in those who inhabit His eternal home. We cannot achieve that perfection, and notably reject it out of hand; but those who are ashamed of their sinfulness and ask His forgiveness, He graciously forgives and credits with Christ’s perfection, as if they were perfect after all!  Such is His great love! (John 3:16).

Rev. Thorin Anderson
Rev. Thorin Anderson is a member of the Advisory Council to Illinois Family Institute and the former pastor of Parkwood Baptist Church on the south side of Chicago. Pastor Anderson has faithfully pastored at Parkwood Baptist Church since September, 2000 until 2022. He received his Master of Divinity degree from Central Seminary. He and his wife Toni have seven children and 19 grandchildren. Pastor Anderson also serves on the board of directors for Men for Christ, an association that organizes annual weekend men’s rallies in Minnesota, Wisconsin, Iowa, and Illinois on a rotating basis. For more information on these...
Full bio and more from Rev. Thorin Anderson
b
a
x
r