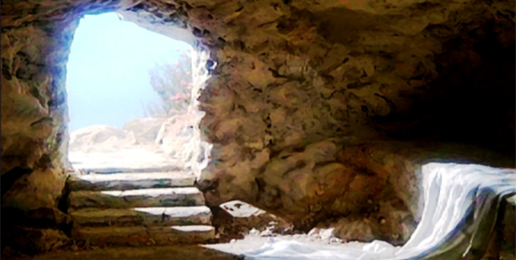 The Resurrection Is A Historical Fact
04.02.21
PRINT

Jesus of Nazareth died on a Roman cross, then resurrected from the dead three days later. It’s not just a fairy tale. Christians believe that the Resurrection is a historical fact. It’s what sets Christianity apart from every other world religion. It is the foundation of the Christian faith. If it’s not true the New Testament is fiction, Jesus is a fraud, and Christianity is a false religion. Anyone would be a fool to believe in it. This isn’t just my opinion. It’s the Apostle Paul’s:

None of us wants to be foolish or pitied for our faith. And no one wants to follow, or encourage others to follow, a false religion. So what reasons do we have to believe this story? It turns out there are several.

If a flight attendant had knocked on my cockpit door at 8:45AM on September 11, 2001, and asked me if she could come up front, I would have unlocked the door while I was still on the phone with her. I wouldn’t have hesitated for a second. But by 9:15AM that same morning, the passengers of United Flight 93 had already figured out that was a bad idea. They were storming the cockpit of their Boeing 757 over southern Pennsylvania for that very reason.

What changed during those thirty minutes?

We all know what changed. The collective mindset of the entire world changed. It’s called an “Impact Event” — an incident so shocking it has the power to change not just what we think, but the way we think … about everything.

In the first century A.D., there were several different kinds of beliefs about life-after-death in the Egyptian and Greco-Roman worlds that surrounded Israel. The Egyptians mummified people with their stuff so they could use it in the afterlife. The Greeks and Romans believed in various forms of an underworld destination. But no one anywhere believed in the idea of a bodily resurrection occurring after a person died.

The Jews weren’t any different. Their views varied by theological sub-group. The Essenes’ views were similar to their neighboring pagan cultures. They believed in a single-stage disembodied immortality — a “soul” that continued on into an “afterlife.” Their view didn’t include any kind of bodily resurrection. The Sadducees did not believe in any kind of life-after-death at all. The Pharisees did believe in one form of a “resurrection.” But theirs was a group event that they thought would occur for all God’s people. The righteous would rise bodily together at the end of time.

Not Even In Myth

In other words, there were plenty of different ideas about what happened to people after they died. But the Jews and their pagan contemporaries agreed about one thing — that the idea of a bodily resurrection was complete rubbish.

This basic tenet of human existence and experience is accepted as axiomatic throughout the ancient world; once people have gone by the road of death, they do not return. When the ancient classical world spoke of (and denied) resurrection, there should be no controversy about what the word and its cognates referred to … ‘Resurrection’ was not one way of describing what death consisted of. It was a way of describing something everyone knew did not happen: the idea that death could be reversed, undone, could work backward. Not even in myth was it permitted.  ~ N. T. Wright, The Resurrection Of The Son Of God

Then, suddenly, everything changed. Despite every commonly-held belief to the contrary, one group of people began believing in a bodily resurrection. They were the first-generation Christians. For some reason, a large group of these people turned on a dime. They started saying that a person could be resurrected. In fact, they claimed that someone had done just that. And they described a resurrected person as having some kind of weirdly transformed physical body. These Christians started using the term “resurrection” in ways they had never used the term before. They talked about it in the present tense.

The idea of a resurrection had been a tangential doctrinal variant for the Jews. But, for some of them, it morphed overnight into the central tenet of their faith. Opinions about life after death had been all over the map. But suddenly Christians were remarkably unanimous about one thing: The Resurrection of Jesus of Nazareth.

And that changed everything else.

Their Jewish religious and Temple worship rites weren’t exempt. They went from practicing animal sacrifice to preaching on Christ’s sacrifice. They claimed that the binding Law of Moses had been fulfilled. That baptism and communion had replaced circumcision as the symbol of their faith. They even changed their weekly day of worship from Saturday to Sunday.

It was like the world had experienced some kind of cataclysmic Impact Event.

The Resurrection is History

These rapid, sweeping changes in thinking and habits are documented history. And that is what makes Christianity so unique. It’s not just a “faith system” or a list of rules for healthy living. And it’s not a self-help program based on having a friendly relationship with God. Christianity is based on an epic story. But the story is true. It’s historically verifiable. And the central event in the story is the Resurrection of Jesus of Nazareth.

The truth of Christianity lives or dies (pun intended) on the Resurrection. If you want to falsify the Christian story, just prove that Jesus never rose from the dead. That is the point the Apostle Paul was making in 1 Corinthians 15. If the Resurrection of Jesus was not an actual, historical event, you can dismiss us Christians as fools.

But if it was, you should bend your knee to the risen Messiah.

As I’ve discussed many times, the definition of truth is “correspondence to reality.” Does what we believe about something match the way the world really is? If it does, that belief is true. And that means that if we believe the Resurrection is true we should have solid historical evidence for it from the real world. Is there any?

You bet there is.

The evidence doesn’t depend on your religious point of view. It’s the same kind of evidence mainstream historians use to evaluate any kind of historic event. You take the evidence you have and look for an explanation that takes all of it into account.

The answer to both those questions is so obvious it blows my mind that I, as a confessing Christian, missed it for decades.

The New Testament was written by people whose lives were turned upside down by the Resurrection of Christ. Their writings weren’t just fanciful musings. The authors wrote down what they saw. And they wrote those things down because of the Resurrection,

The Resurrection came first. It’s why we have a New Testament.

So, we have highly reliable historical documents. And those documents record an Impact Event unlike any other. Billions of people have died throughout history. But the world has only reset its entire calendar system in honor of one life. That’s the ultimate kind of Impact Event. And it’s powerful evidence for the historicity of the Resurrection of Jesus.

The New Testament writers experienced the Impact Event and wrote about what they saw. But they weren’t the only ones. Other historians witnessed the effects of the Resurrection too. And their accounts corroborate the New Testament authors’ stories. For that reason, there are several elements of the story that even its critics admit are undeniable. These are mainstream historians who overwhelmingly agree to the veracity of five facts tied to the Resurrection. Dr. Gary Habermas, a world-class PhD Bible scholar, calls these the “Minimal Facts.” And he has popularized an argument based on them.

Here are the five central elements of the Resurrection account that even Christianity’s opponents admit are historically accurate:

1.) Jesus of Nazareth died by crucifixion on a Roman cross.

2.) Jesus’ disciples believed that he appeared to them after he had died.

3.) Paul, the church persecutor and sworn enemy of Christianity, was suddenly changed into its greatest advocate.

4.) James, the brother of Jesus, suddenly dropped his skepticism and became the leader of the Jerusalem church.

5.) The tomb where they buried Jesus on Friday was empty on Sunday.

Since there is overwhelming agreement to these, Habermas’ “Minimal Facts Approach” simply says that the conclusion we draw about the Resurrection must be based on an “inference to the best explanation” for all these facts.

I’m not going to get into the details of each right now, but here’s the point: The only all-encompassing explanation for all five of these facts is that that Resurrection actually occurred.

A Reason To Believe

The New Testament writers penned their manuscripts for a reason. They believed that something cataclysmic had happened. And it doesn’t make sense to say they conspired to concoct the story. Every single one of them went to his grave without recanting the story they shared. Most of them were executed for that very reason. It strains credulity to say they were willing to suffer and die in defense of a story they knew they had made up.

Taking all this into account, it is perfectly reasonable to say the Resurrection is a historical fact. If you can say that about any historical event, you can say it about this one.

And yes, that means a miracle occurred. So, those who deny that miracles are possible can’t just dismiss the Resurrection as being “religious.” Of course it’s religious. But it’s also historical. The evidence is clear. They can doubt all historical claims. Or they can be reasonable and rethink the presuppositions that led them to reject miracles in the first place.

Here is a short summary of some of the “Minimal Facts” about the resurrection:

… and there is plenty of evidence to support each one of these facts:

This article was originally published at TrueHorizon.org.