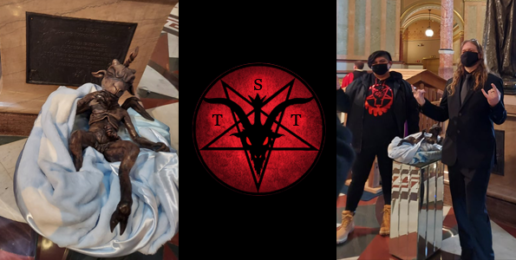 Christmas is a time of reflection on the gift of Christ and the salvation that He provides through the cross. For generations, Americans have displayed nativity scenes in front of churches and in public settings. Yet, these displays have not gone without opposition. In Illinois, the Satanic Temple of Illinois constructed a display in the Capitol rotunda, near the nativity display. Despite their dark representation, the light of Christ remains on full display and the gospel is proclaimed.

A Christmas nativity scene is a staple in the rotunda and has been erected every year since 2008. The Springfield Nativity Scene Committee (SNSC), which was started as a non-denominational association by Dan T. Zanoza, began the tradition. Illinois was the first state to have a Christmas nativity. Other states have followed our lead, and there are now 32 displays in various states’ capitol buildings.

The U.S. Constitution’s first amendment allows religious displays in public settings as long as the exhibits are temporary and presented by private associations. However, the law also dictates that the state cannot discriminate between groups and must allow access to all private organizations and individuals. As a result, groups such as the Illinois branch of Freedom from Religion have posted displays for several years. These exhibits included a sign in 2019 denouncing all religions as “myth.” 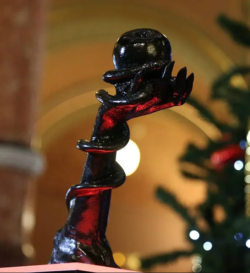 For the last three years, the Satanic Temple of Illinois has placed displays in the rotunda in opposition to the Nativity. In previous years, the group’s display was called “Snaketivity” and represented Eve’s arm with her hand holding an apple and the snake wrapped around her arm. Upon the base of the sculpture appeared the phrase “Knowledge is the Greatest Gift.” Their statement was a deliberate affront to Christians, as Christians know that the greatest gift is Jesus Christ and His redemption on the cross. (See photo to the right.)

This year the Satanists put their display up on December 21st when many Pagans celebrate the winter solstice. The group used a statue on loan from the Satanic Temple in Salem, Massachusetts. Entitled “Baby Baphomet,” this statue of a male infant, human-goat hybrid is a grotesque representation and mocks the infant Christ in the manger. The group’s intent is to create a mockery of Christianity while presenting blasphemous images in the name of “equal access.”

Members from the temple were present for the ceremony. Some were dressed in black, while others wore regular clothing. They circled the display and chanted what can only be described as incantations. One member, who identified himself as “Minister Adam,” spoke to the media, stating, “The Capitol welcomes a diverse range of religions every year to display holiday statues during the holiday season, so we wanted to join in on that.” The group claims that the statue represents “plurality, unity, compassion, and empathy.” Despite the affirming descriptions the group gives to their sculpture and activities, the true nature of their group cannot be ignored.

Beth Rogers, a member of the Springfield Nativity Scene Committee (SNSC), was present when members of the Satanic Temple of Illinois revealed their display. She interviewed the man who identified himself as “Adam and asked if “this religion is about secularism and pluralism?” He answered, “No, it is about Satanism.” She then asked what values represented Satanism. He stated, “compassion, empathy, benevolence, struggle for justice against arbitrary authorities, pluralism and making sure that all religions are represented especially at this time with the state.” Seemingly, the group utilized several of the buzzwords of the Left and the leftist agenda. (See video below.)

The question must be asked, how is mocking Christianity compassionate or empathetic? In what way is the grotesque figure of Baphomet benevolent? The truth is that groups enmeshed in darkness deceive the public and themselves in their attempt to paint an image of equality and peace. In reality, their public display is intended to oppose God, to blaspheme the name of Jesus, and to mock His believers.

This time the Satanists did not have an easy time displaying their hatred. A Catholic organization, the American Society for the Defense of Tradition, Family, and Property, was present when the Satanists celebrated their display. The group held up protest signs stating, “Satan has no rights.” Some of the Catholics present recited the rosary during the ceremony. Beth Rogers of the SNSC quoted Scripture declaring the divine nature of Jesus Christ and the triumph He has over Satan.

Rogers questioned Adam about the nature of Satanism and shared her testimony and the gospel. She asked Adam, “if you were to die today where would you want to go? Heaven or Hell?” Adam responded, “I don’t believe in any of that.” He acknowledged Christians’ rights to display the Nativity and have equal access in the capitol, but he quickly discontinued the conversation with Beth. Perhaps he felt convicted by the gospel. Regardless, we should pray for Adam and all the members of the Satanic Temple to be convicted of their sins and to receive Jesus Christ as their savior.

The Nativity and the Satanic display in the Capitol rotunda represent the battle between the light of God and the darkness of Satan. Satan attempts to appear compassionate and benevolent. The Bible says in 2 Corinthians 11:14 that “Satan transforms himself into an angel of light.” So, we should not be surprised that his followers would appear to be benevolent and interested in equality and justice. In reality, Satan is using them as agents of deception and destruction. As we read in I Peter 5:8, “Be Sober, be vigilant; because your adversary the devil walks about like a roaring lion, seeking whom he may devour.”

Take ACTION: Pray for those trapped in sin and deception, like Adam and other Satanists. Please, lend your support to groups such as the Springfield Nativity Scene Committee (SNSC) and the Thomas More Society, which underwrites the cost of the SNSC’s display, to ensure that the nativity scene and other religious displays in the capitol’s rotunda will continue. The Nativity crèche will remain on display until January 6th. If possible, visit the capitol to view it and show your support for the work of the SNSC. Today the most important thing we can do is share the Gospel with someone who needs to hear it.

We must make known the words of Jesus recorded in John 8:12;