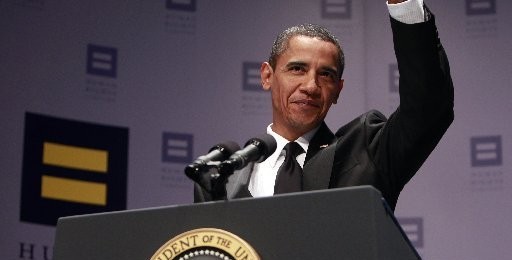 President Barack Obama is sold out to the radical homosexual agenda. One needs no more proof than his most recent pro-homosexual gesture, recognizing homosexual partners raising children in the official White House Proclamation on Father’s Day:

Nurturing families come in many forms, and children may be raised by a father and mother, a single father, two fathers, a step father, a grandfather, or caring guardian.

Yes, you read that right. The President of the United States of America went out of his way to pander to the homosexual community by recognizing two-daddy homes (read motherless) on Father’s Day.

What the President refuses to acknowledge is that the family is God’s idea. It is a sad fact that in this fallen world children are sometimes raised by single parents or grandparents, but being raised in a climate of homosexuality by two men — or two lesbian women — subjects children to a cruel social experiment and denies the real need and benefit of having both a mother and a father. It wasn’t too long ago that this type of a household would have been considered the ultimate in dysfunction. Today, our radically liberal president embraces this dysfunction as just another form of “family”. We really shouldn’t be surprised, this is part of the “change” he promised on the campaign trail in 2008.

Obama also used this cherished American holiday honoring fathers and fatherhood to make a statement about his views of when life begins. In the first few words, the Obama proclamation declares a father-child bond commencing “from the first moments of life.” In so doing, Obama refuses to acknowledge that life begins at the moment of conception, when a unique human life with unique human DNA, begins. Nor does he acknowledge the fact that millions of fathers view their unborn children in ultrasound pictures well before they are born.

It is also interesting to note that Pres. Obama and his leftist friends aren’t observing Gov. Mitch Daniel’s foolish call for a truce on the social issues. Instead the Left is happy to shove them in our face.

While so-called “moderates” and fiscal conservatives shrug their shoulders, the morality of the people and nation suffer.

Charles Carroll, signer of the Declaration and member of Continental Congress warned us:

“Without morals a republic cannot subsist any length of time; they therefore who are decrying the Christian religion, whose morality is so sublime and pure, which insures to the good eternal happiness, are undermining the solid foundation of morals, the best security for the duration of free governments.”

Sexuality Propaganda: From Drip Drip Drip to Downpour
b
a
x
r