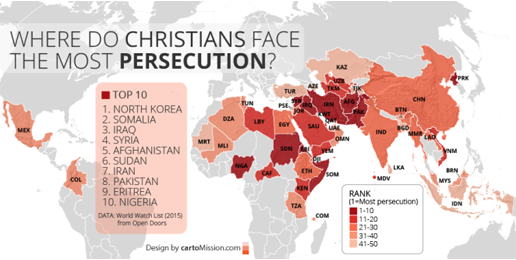 Remember the prisoners as if chained with them—those who are mistreated—since
you yourselves are in the body also. ~Hebrews 13:3

Where are Christians suffering the most for their faith? Nigeria and China would be very good answers. In both countries, suffering for the sake of Christ is very real, although the suffering takes on different forms in each nation.

China, the largest country in the world in terms of population, is still dominated by a communist government that, since coming to power, has killed an estimated 60 million people (this estimate is likely on the low end). Numbers of this magnitude are almost impossible for us to grasp.

Praise the Lord that despite this almost unbelievable adversity, there are still many Christians in China. These believers choose to follow Christ, knowing full well that they will most likely suffer because of their faith.

One of many inspiring stories of courage and suffering is that of Early Rain Covenant Church in Chengdu, China. This faithful congregation grew from 63 members in 2008 to approximately 500 members today.

In December 2018, the Chinese government started directly attacking this congregation. To date, more than 200 members of this church have been arrested, though most have been released. In 2019, church elder Qin Defu was sentenced to four years in criminal detention. Pastor Wang Yi was sentenced to nine years in criminal detention. Beyond arrest, the government has also seized church and personal property. Many families have faced the cruel reality of eviction from their homes and even deportation from the city of Chengdu.

A recent update reported that Preacher Wu Wuqing and his family have been locked into their homes by government forces. Guards now surround their residences.

Nigeria is the largest country in Africa, with a population of almost 220 million. It is unique in that it is both one of the largest Christian and Muslim countries in the world.

It is estimated that, since 2015, over 12,000 Christians have been murdered simply because they are not Muslim. Many, many more have been displaced by violence as the Fulani Tribesmen invade rural villages and unleash a targeted genocide against Christians. This suffering is in addition to the great harm caused by another Muslim terrorist group, Boko Haram.

Recently more than 125 students from a Baptist school were kidnapped. In the following six days, at least thirty-three Christians were killed, four churches were burned, and hundreds of homes were also burned.

Again, it is very difficult for us to fully appreciate the atrocities that take place in China and Nigeria. Yet, the call of Scripture is to remember, to remember all our brothers and sisters in Christ, to remember we are part of the body of faithful believers all over the world.

It is important to keep these things in mind so we have the right perspective on what we, as Christians, face in our nation. It would be wrong to try to directly compare what American Christians face with what believers in China, Nigeria, or many other countries face. But, at the same time, it is also foolish to ignore the very many stories of harassment and even government-sanctioned persecution against faithful believers in the U.S.

While we shouldn’t exaggerate or directly compare the trials of faithful Christians in America with the suffering of those in China or Nigeria, we must not ignore or forget the stories of believers like Jack Phillips (Masterpiece Cakes), Barronelle Stutzman (Arlene’s Flowers), Aaron and Melissa Klein (Sweet Cakes by Melissa), Jim and Beth Walder (Timber Creek Bed and Breakfast), Joanna Duka and Breanna Koski (Brush and Nib Studios), and, no doubt, many others whose stories have not been as widely publicized.

As best we can, we must stand with faithful believers both in our nation and around the world. We need to pray, give, and learn more about what is happening, and then share that information with those who are unaware of the moral, spiritual, and legal attacks perpetrated against Christians in our nation.

We must keep a proper perspective and not be ignorant of these matters.

4] The Crisis of Christian Persecution in Nigeria