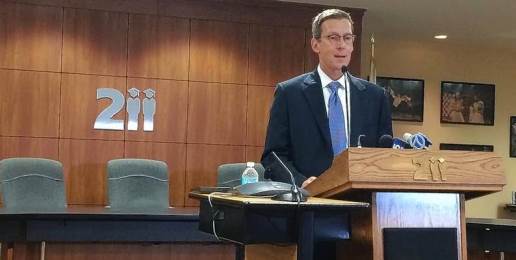 Palatine resident and pastor of the Village Church of Barrington, David W. Jones, attended the District 211 Board of Education meeting on Wednesday night and sent the following letter to the District 211 School Board immediately following the meeting. If only every pastor, priest, elder, and lay person would follow Pastor Jones’ example, perhaps further harm to children and truth can be prevented.

Make no mistake, the kind of assault on truth and reality that is taking place in District 211 is coming to all public schools—including elementary schools. The issue of how biological sex is treated in public schools should not concern just families with children in schools. It should concern every follower of Christ. First, the children in school today will be our culture-makers tomorrow. Second, if we love our neighbors as ourselves, we should care deeply about the dissemination of body- and soul-destroying lies. And third, what our taxpayer-funded schools teach through curricula, policy, and praxis is a stewardship issue.

Please read, be inspired by, and emulate Pastor Jones:

I am writing to express my disagreement with the outcome of last night’s school board meeting vis-à-vis the OCR agreement. I was present at the meeting. It was clear that a significant majority were opposed to settling with the OCR. Although I did not keep score, I would estimate that at least 80 percent of those who spoke—some eloquently—were opposed to any compromise with the federal government on this issue. It grieves me that the board caved in to the OCR’s unlawful demands. The OCR cannot redefine our society’s legal definition of gender. What will the federal government demand next? (I acknowledge the previous sentence to be a type of “slippery slope” argument. But that form of argument is not always invalid, if one can demonstrate the mechanism by which further changes will likely happen.)

It was also surprising to find the D211 website updated shortly after the meeting with several statements that appear to have been worded carefully and approved by legal counsel. This suggests that the decision was a fait accompli before the hearing began. If this is true, then it was not a hearing at all but rather only the appearance of one. It is hard not to feel betrayed as a resident and taxpayer. This feeling only increased when I read the board’s statement: “We have implemented practices surrounding transgender student access to restrooms for two-and-a-half years, without incident.” Is this the first time that policy has been made public? If so, why were not parents informed about this earlier?

We are kidding ourselves if we think that this issue is limited to one student. Now that the precedent has been set, and the OCR knows that it can intimidate local school districts in general and D211 in particular, it will just be a matter of time before it comes knocking again. There will be more gender-dysphoric students, and they will demand special rights like “Student A.” How can they be denied? Also, how will a school board be able ultimately to deny access to any student who claims to be the opposite gender? How could that person’s claim be invalidated? If male students begin to populate female sports teams, that will give them an unfair advantage. If female students begin to populate male sports teams (e.g., football), they could actually be hurt. Title IX was originally about leveling the playing field. The OCR’s current interpretation will actually have the opposite effect, putting female students at a distinct disadvantage. That is not a little ironic.

With all due respect, last night’s decision by the board was a bad one. It fails to protect adequately the privacy of actual females, while granting special rights to a young man who is confused about his gender. The requirement to retain an adolescent gender expert—at taxpayer expense—also concerns me. What ideology will drive this individual? What else will they force upon our schools and, therefore, our students? I am afraid that the board’s decision could have significant consequences down the road, many of them unintended. I do not know if the board can reverse its decision; I would urge you to do so.