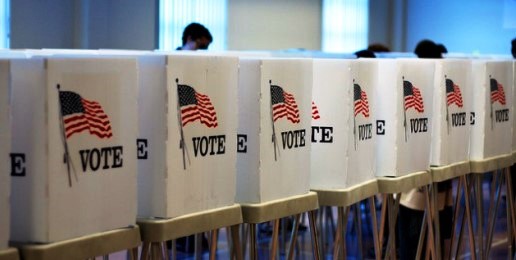 In less than two weeks, Americans will know which candidates will direct the course of our state and nation for the next two to four years.  Unfortunately, too many Christians do not understand exactly what is at stake.  With each passing election cycle, we ought to be ever more concerned with the vital issues of essential liberty, morality, and ethics. Right now, due to the steady erosion of long-held liberties, coupled with the rise of bigger, more tyrannical government and a blatant disregard of corruption in leadership in all areas of government, our Christian values and way of life are quickly disintegrating.

This progressive disintegration is exactly what we can expect to happen when Christian citizens choose to ignore their responsibility to actively participate in self-government.  When we refuse to fulfill our obligation, we squander a precious gift given to us by God.  By declining to take part in the political process, we are relinquishing our God-given authority and handing it over to atheists and humanists who will abuse, distort and exploit it for themselves or for godless agendas.

It is unthinkable that Christians would refrain from the political process, knowing full well that the absence of their voice and vote will allow godless ideologies and philosophies to influence and capture the culture!

Romans 13 tells us that “there is no authority except from God, and the authorities that exist are appointed by God.”  Who has been appointed as authorities here in America? The first three words of the U.S. Constitution tell us:  “We the people” are the appointed rulers.  In our republican form of government we delegate our authority to certain offices and branches of government, but we are ultimately responsible for the authority that we delegate.

Therefore, when the Bible we profess to believe in tells us that political power comes exclusively from the very God we worship, it is unconscionable for Christians to excuse themselves from the public arena on the grounds that “Christians shouldn’t be involved in politics.”

I must also point to the fact that a Biblical view of love requires our political engagement.  In Matthew 22:36-40, Jesus tells us that the greatest commandment is to “love the Lord your God with all your heart, with all your soul, and with your entire mind.”  He goes on to tell us that the second great commandment is like it: “You shall love your neighbor as yourself.”

If we truly love our neighbors as ourselves, shouldn’t we be more intentional about opposing or supporting certain candidates and their legislative proposals in Springfield and Washington D.C. because we know how it will affect not only our family, but our neighbor and his or her family as well?

If we truly love our neighbors, we should be actively promoting candidates who are pro-life, pro-marriage, and who understand pro-family concerns in regard to bigger government, higher taxes, drug legalization, school indoctrination, gambling expansion, and pornography.

Then there is the issue of stewardship.  As it has been pointed out before, roughly 20-30 million Christians did not vote in the last presidential election in 2012. This is certainly not good stewardship of God’s gift of self-government!

Consider the passage of Scripture in which Jesus praises a servant by saying “Well done, good and faithful servant! You have been faithful with a few things; I will put you in charge of many things.” (Matthew 25:21)  In light of this Scripture, is it any surprise that Bible-believing Christians are sparsely represented in Springfield and Washington, D.C?  Moreover, if we aren’t faithful in the little things that God has given us to do – such as voting or communicating with our elected representatives – why are we surprised that we aren’t successful when it comes to the bigger things?  (This is why you should voluntarily enlist in IFI’s Gideon’s Army!)

Even if America was a monarchy or a dictatorship, where citizens have very little influence in civil government, Christians would still have a responsibility to be salt and light in the dark and decaying culture. In America, however, we are blessed with the benefit of living in a country not only founded on Christian principles, but also established on the maxim that power is derived from the consent of the governed. “We the people” have both a civic and Christian duty to be engaged in culture and government.

I will admit that the situation we face is difficult – but we are not without hope and we have political tools and spiritual resources at our disposal!

Let me challenge each and every one reading this today:  Take a stand.

Make sure you research the candidates using the IFI Voter Guide and/or the IFA online guide at ILVoterGuide.com.  Then be sure you make the time to vote!

But let that not be the only political engagement you partake in this year.  There are other ways to be involved and to engage the culture.  The reality that the godless Left has been able to effectively influence the culture, where we have not, should spur us to do all that we can to present a Biblical worldview.

Many will try to dissuade us from influencing the culture with our faith and political views – telling us that we should not talk about religion and politics – but that is a ploy to silence us!

George Washington understood the importance of one’s influence.  This quote expresses his thoughts:

“It should be the highest ambition of every American to extend his views beyond himself, and to bear in mind that his conduct will not only affect himself, his country, and his immediate posterity; but that its influence may be co-extensive with the world, and stamp political happiness or misery on ages yet unborn.”

We cannot extend our views on faith and politics if we remain silent, distracted, and disengaged from the public square.

So, first and foremost, I encourage you to vote! And after you vote, please do not disengage from the political arena until the next election cycle.  Now is the time for Christians to be intentional about engaging the culture!  It is time that we become good stewards of the duty of self-government and it is time we get serious about being Christ’s ambassadors! (2 Corinthians 5:20)

Finally, I want to encourage you to PRAY for our state and nation.  We don’t deserve God’s mercy, but we should still wholeheartedly pray for it!

PRAY that citizens in Illinois and across America will choose to go to the polls to support candidates who will honor biblical truth, uphold life and marriage, and defend religious liberty and our Christian faith.

And after this election cycle, continue to PRAY for all of our government officials as you are led, and as  1 Timothy 2:2 instructs us to do.

Please share this on social media and
with your Christian neighbors & family members!

(Click HERE for the Español version of this article.)

(Click HERE for a Romanian version of this article.)

When Humans Don’t Procreate: An Update

Be Fruitful and Multiply
b
a
x
r