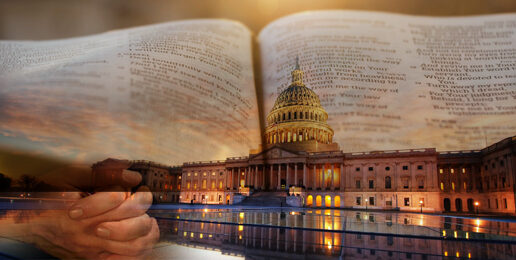 The idea of influencing the government for good is a theme that runs through the entire Bible.

We are given examples of God’s people bringing significant influence to pagan kings and rulers who gave no indication of allegiance to the God of Israel.

Think about the prophets in the Old Testament bringing counsel, encouragement and rebuke to the kings of Israel, the good and bad kings.

We also have examples in the New Testament. For example, the case of John the Baptist.

Luke 3:18-20: So with many other exhortations he preached good news to the people. But Herod the tetrarch, who had been reproved by him for Herodias, his brother’s wife, and for all the evil things that Herod had done, added this to them all, that he locked up John in prison.

John the Baptist had been rebuking him about his actions as a ruler, and Herod didn’t like it. So he locked John up.  (See also Matthew 14:3-4)

And in Acts 24, Paul is on trial before Felix the Roman governor:

Acts 24:24-25: After some days Felix came with his wife Drusilla, who was Jewish, and he sent for Paul and heard him speak about faith in Christ Jesus. And as he reasoned about righteousness and self-control and the coming judgment, Felix was alarmed and said, “Go away for the present. When I get an opportunity I will summon you.”

In the phrase, “as he reasoned about righteousness and self-control and the coming judgment,” the word reasoned in the Greek is dialegomai, which means a back and forth conversation or discussion.

Felix may have been asking Paul about decrees and rulings that he issued as governor. Paul was discussing back and forth with Felix the righteousness that God demands or possibly the moral evil of what Felix had done.

We have many examples that support the idea that Christians today should seek to significantly influence government and its leaders.

Christian influence has led to a greater value on human rights; freedom of religion; equality before the law and property rights.

The Christian beliefs of Martin Luther King impacted the outlawing of racial segregation and discrimination. And today, tens of thousands of Christians form the backbone of the pro-life movement.

Without Christian influence, governments will have no clear moral compass. Think about all the issues that come up today in our legislatures and/or government bureaucracies that are issues of moral right wrong.

If Christians do not speak publicly about moral and ethical issues facing a nation, where will our political leaders find moral guidance? Without Biblically informed Christian influence, government officials will have no clear moral compass.

Leaders won’t learn ethics from Hollywood or the main stream media! Certainly not from government schools and universities. If we are not going to use the Bible to tell society about moral right and wrong, where are these standards going to come from?

As Christians, we must remember that the world is in a tremendous spiritual battle. There are demonic forces that seek to oppose God’s purposes and to distort His truth.

They seek to bring evil and destruction to that which God loves — every human being created in His image. And if we remain silent about the moral and ethical issues that we face as a society and a nation, the moral vacuum increases.

And what is troubling to me is that Christians are not showing up to the battle. What happens at a baseball game if the opposing team does not show up to the game?  They forfeit the game. I can’t think of a worse way to lose a game than not showing up. And when Christians don’t speak out about the moral issues facing the nation, the enemy wins by forfeit, because the Christians just weren’t there.

And what is happening, because we aren’t there to speak out on these issues? Anti-Christian forces win the day.

Well, over the past 80-100 years, the unthinkable has now become thinkable.

We are witnessing the result of God’s people disengaging from the culture — or even worse — conforming to the culture.

We are called to more! Much more. In fact we have a mandate!

In Genesis 1:28 we find what some call the Cultural Mandate, some call it the Creation Mandate:

God blessed them and said to them, ‘Be fruitful and increase in number; fill the earth and subdue it. Rule over the fish of the sea and the birds of the air and over every living creature that moves on the ground.’

Nancy Pearcey in her book Total Truth interprets this mandate, and says:

The first phrase, “be fruitful and multiply,” means to develop the social world; build families, churches, schools cities, governments, laws. The second phrase, “subdue the earth,” means to harness the natural world: plant crops, build bridges, design computers, and compose music. This passage is sometimes called the Cultural Mandate because it tells us that our original purpose was to create cultures, build civilizations – nothing less.

This mandate was meant for not only Adam and Eve, but for us as well. It still stands as God’s directive for our stewardship of His creation. Traditionally Christian theologians have understood Genesis 1:28 as mankind’s purpose and permission for engaging the world.

We are made in the image of God, and we are meant to “image” God, that is, to reflect Him. Being in the image of God refers not only to who we are but also to what we are created to do. We are called not just to work but to do certain tasks to achieve a definite goal.

Genesis 1:28 commands us to be fruitful, increase, fill, subdue and rule.  These five commands reveal our most basic human responsibilities. Theologian and author Dr. Richard L. Pratt says this:

It was God’s design that people build an earthly culture for his glory.  This Cultural Mandate involves two basic responsibilities:  Multiplication and dominion.

First God gave Adam and Eve a commission to multiply:  Be fruitful… increase… fill.  Their job was to produce enough images of God to cover the earth.

Second, God ordered them to exercise dominion over the earth:  Fill… subdue… rule.  Adam and Eve were to exercise authority over creation, managing its vast resources on God’s behalf.

Needless to say, these two mandates cannot be entirely separated from each other…  Nonetheless, from the beginning these two sides of the Cultural Mandate were to be our main tasks in life.

This is how Pastor D. James Kennedy defined the Cultural Mandate:

Unfortunately, in the last 80-100 years, the Church in America has largely ignored the Cultural Mandate, and as a result we see the culture circling the drain. There are a plethora of surveys that reflect this fact:  people feel the Church is irrelevant to modern society. We have allowed ourselves to be irrelevant, and we’re reaping the consequences.

To a large extent, the Church has withdrawn into what Kennedy calls a “pietistic ghetto.” We have turned our educational system, which was founded by Christians, over to unbelievers. We have turned science, which was founded by believers in the living God, over to unbelievers. We have turned much of the media over to exhibitionists and liberal activists, so that the culture is continuously bombarded by their godless thoughts, ideas and political agenda. We have handed over the reins of government, to a large extent, to unbelievers who have been busily engaged in legislating the devil’s designs for the state and nation.

We have been in retreat and have not sought to fulfill the Cultural Mandate.

Almighty God, Maker of heaven and earth, has planted us here in America “for such a time as this” for a reason. The times are troubling, no doubt, but the fact remains that we live in a country that He has blessed with the gift of self-government. The authority of governing rests with “We the people.”

To intentionally sit back and watch humanists and atheists implement wicked policies that will hurt, damage and destroy lives, relationships, families, and communities is to deny the principle of authority that He has given to us.

For Christians to refrain from the political process is to allow godless ideologies and philosophies to influence and capture the culture.

How do Christians — in a government of the people, by the people, and for the people — choose not to inject truth into the public square when we are the ones who know the Author of Truth?

“Silence in the face of evil is itself evil: God will not hold us guiltless. Not to speak is to speak. Not to act is to act.”  ~Dietrich Bonhoeffer

God is not going to hold us guiltless.

Do we not see that because of our absence the government in America has become utterly godless and corrupt, so much so that it will no longer punish evil and reward good, but it is now starting to reward evil and punish good?

Be exalted, O God, above the heavens! Let your glory be over all the earth!  ~Psalm 57:5

Over all the earth!!

For where the glory of God is not made the end of the government, it is not a legitimate sovereignty, but a usurpation, and he is deceived who expects lasting prosperity in that kingdom which is not ruled by the scepter of God, that is, his Holy Word…

Brothers and sisters, it is all about God’s glory.

It is time that Christians get serious about engaging the culture  —  not for political gain or for worldly praise  —  but for the glory of the Lord!  And that requires  —  in part  —  that we bring significant influence to bear on our government.

“There is not a square inch in the whole domain of our human existence over which Christ, who is Sovereign over all, does not cry, Mine!”  ~Abraham Kuyper