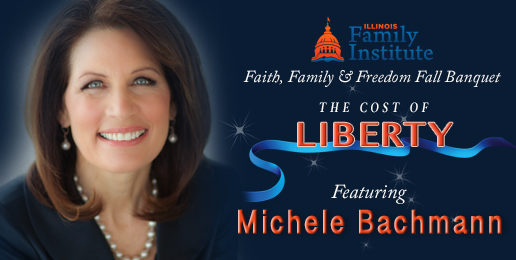 In 2016, IFI was fortunate to have as our annual banquet keynote speaker former Congresswoman Michele Bachmann, a strong and consistent voice for pro-family values. A former candidate for POTUS, she not only distinguished herself by forming and chairing the Tea Party Caucus in 2010 in the U.S. House, but as a courageous and outspoken pro-life leader, as attested to by her rating of zero from the National Abortion Rights Action League (NARAL).  First elected in 2006 and stepping down in 2014, Congresswoman Bachmann understands well the gravity of our diminishing civil freedoms and has experienced, first hand, the relentless and intolerant attacks of the Left on people of faith.

In this presentation Mrs. Bachmann speaks on Christians’ responsibility to defend truth in our country. Using the example of the Pilgrims, who came to found a new community on Christian principles, she argues for the good that Christians can do in a society to preserve its culture and uphold truth. The spirit of the United States did not originate with the U.S. Constitution or with the Declaration of Independence, she argues; rather, it comes directly from God, who upholds man. With the spirit of the Pilgrims’ Christian community, we can preserve this country, and this speech may well inspire more Christians to do so.

Mrs. Bachmann is a graduate of Anoka High School and Winona State University. She and her husband, Marcus, live in Stillwater where they own a small business mental health care practice that employs 42 people. The Bachmanns have five children, Lucas, Harrison, Elisa, Caroline, and Sophia. In addition, the Bachmanns have opened their home to 23 foster children over the years, which was the inspiration for Michele’s advocacy and work for foster and adopted children, earning her bipartisan praise for her efforts.

Michelle Bachmann on ‘The Cost of Liberty’
b
a
x
r