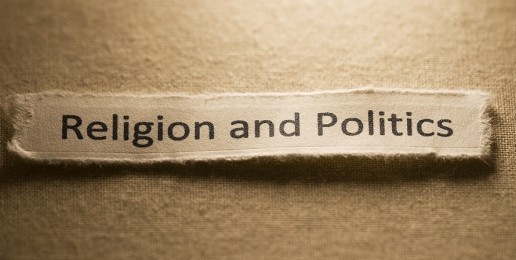 Like It or Not, Politics and Religion Are Now Inseparable
Written By Fran Eaton   |   10.19.13
PRINT

Every day there’s more evidence that Judeo-Christian beliefs are no longer welcomed in the public square or in public policy discussions.  The argument is that politics is no place for religion, and religion is no place for politics.

But suffocating Judeo-Christian beliefs and rejecting Biblical principles in public policy simply rids decision-making halls of one religious worldview and replaces it with another. American influentials have embraced an anti-religious philosophy commonly known as secularism, and are moving quickly to oust religion from the public square.

Americans whose faith teaches abortion is wrong, and who follow their consciences by refusing to pay for or distribute abortifacients, are facing millions of dollars in fines if they do not succumb to state policy.

In Illinois, Catholic adoption agencies that refused to offer services to same-sex couples and hire homosexuals for staff lost a 90-year contractual agreement with the state, causing the services to shutter, needlessly setting thousands of placed children into chaos.

Illinois small business owners that refuse to open their bed and breakfasts to same sex civil union celebrations based on their religious convictions are being sued for civil rights violations.

Indeed, in every aforementioned case, the state imposed its preferred anti-religion belief system over Bible-based worldviews. In every case, constitutional First Amendment rights weighed in the balance.

Removing “God”or His principles from the public square may sound tolerant and non-combative in a modern pluralistic culture, but another belief system always fills the void.

A government that demands believers publicly ignore or reject the concept of a Sovereign God replaces the Judeo-Christian worldview with an agnostic or atheistic belief system.

Such actions make secularism America’s state religion – one that must be rejected by those faithful to God.

Ironically, America was founded over this same controversy nearly 400 years ago.

The Pilgrims left England in 1620 because the state-endorsed Anglican Church had imposed itself on non-traditional, God-seeking Pilgrims. The Pilgrims viewed the state church’s overbearing demands as religious persecution, and set out to protect themselves and their children from the ungodly influence so pervasive in 17th Century Europe.

Religious freedom was so important to the Pilgrims, they boarded a rickety, four-deck sailboat to escape across a mysterious, dangerous ocean to find God-worshipping liberty.

The Plymouth Plantation’s Governor William Bradford explained the group’s unapologetic commitment to serving God for the sake of their progeny and their eternal welfare:

“…They cherished a great hope and inward zeal of laying good foundations, or at least of making some way towards it, for the propagation and advance of the gospel of the kingdom of Christ in the remote parts of the world, even though they should be stepping stones to others in the performance of so great a work.”

Their response was admirable and inspirational, there’s no doubt.  But the Pilgrims had an opportunity to escape religious persecution, rather than suffer under its rule. That option isn’t one for most Judeo-Christian devotees in America today.  There’s no other country on Earth that can provide a similar escape from religious persecution.

First, pray for God to intervene.

The Apostle Paul offers this counsel in I Timothy: “First of all, then, I urge that entreaties and prayers, petitions and thanksgivings, be made on behalf of all men, for kings and all who are in authority, so that we may lead a tranquil and quiet life in all godliness and dignity.”

Then, act upon your faith. Get involved, even if it takes great courage and sacrifice.

In the Old Testament, Shadrach, Meshach and Abednego were thrown into a fiery furnace because they refused to bow down to King Nebuchadnezzar’s golden image.  The Lord miraculously protected them, and an official decree required the kingdom to honor their Lord.

Then Daniel, a high-ranking official captured from Jerusalem, was thrown into a lion’s den for praying three times a day. Again the Lord protected Daniel and corrupt officials were thrown into the same lions’ den, where they perished.

But that could never happen in Illinois, and of course, not nationwide, right?

America was founded by those whose top priority was to serve God and protect religious liberty from overbearing anti-religious rulers. So much so, the freedom to practice religion is listed among those protected in the very First Amendment.

Citizens that say they are committed to their faith are no longer be able to stand on the sidelines if they want to continue to worship freely and practice their faith in their everyday lives.

Like it or not, politics and religion in America – and in Illinois – have now become inseparable.

Click HERE to make a tax-deductible donation to the Illinois Family Institute.