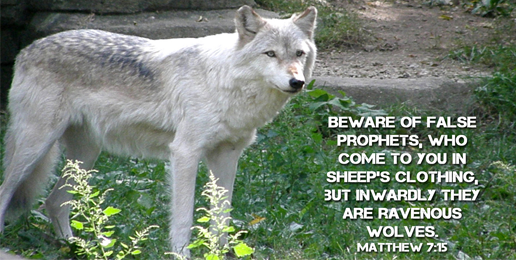 There’s something rotten in the Evangelical Covenant Church (ECC). It’s rotting from the inside due to the presence of wolves in sheep’s clothing like Peter Hawkinson, pastor of Winnetka Covenant Church; Michelle Clifton-Soderstrom, North Park Theological Seminary professor; and Judy Peterson, the recently removed chaplain of North Park University. Their theological drift away from orthodoxy is indicative of what is taking place in many denominations that are supplanting Scripture with personal experience and desire as the lens through which to read and interpret Scripture.

It’s a dense thicket of ambiguous, evasive double-talk rhetoric through which to wade in order to purposefully discern the heretical end game toward which Hawkinson has been leading his congregation, but I’ll give it the old college try.

After the approved motion, came a 6-member task force to organize the “program of purposeful discernment,” a series of 7 meetings to which all church members were invited but only a minority attended. Then the task force organized a pack of 12* to write the “Welcome Statement” that Hawkinson all along desired. Here is that heretical statement, a statement that violates the ECC position, which calls homosexuality “sexual sin”:

We welcome you to Winnetka Covenant Church. We are a community of diverse history and ethnicity, gender identity and sexual orientation, status, ability, and challenges. We invite you to join us wherever you are on your spiritual journey and to participate fully in the life of the church.

So many things wrong, so little time.

“Gender identity” is intended to render equivalent the experience of men and women who accept their biological sex and those who reject their sex. The Bible is clear that men and women are not to adopt the cultural conventions of the opposite sex in order to pretend to be the sex they are not.

The term “sexual orientation” is similarly intended to confuse, deceive, and muddy ideological and theological waters. It is intended to suggest that heterosexuality and homosexuality are flipsides of the sexuality coin, whereas, in truth, homosexuality is a disordering of the sexual impulse resulting ultimately from the Fall. The Bible is clear that God abhors homosexual activity and relationships even as he loves those who experience disordered same-sex attraction.

Second, Hawkinson (et al.) includes the sins of sexual impersonation and homosexuality in a list of non-behavioral and, therefore, morally neutral conditions like history, ethnicity, and disability. In doing so,  he reveals his view that homoeroticism and sexual impersonation are morally neutral acts, whereas, according to Scripture, they are serious sins that if not repented of jeopardize one’s eternal life.

Third, churches should welcome all people, but welcoming people does not—indeed, must not—include affirming sin as good. Moreover, inviting people to “participate fully in the life of the church” must include calling them to repent of their sins.

Hawkinson has suggested in the past that these are issues on which Christians can disagree. Theologically orthodox religious leaders beg to differ—strenuously. The morality of sexual impersonation and homoerotic activity and an understanding of the nature of marriage are to theologically orthodox faith leaders theological deal breakers.

Sam Allberry, British theologian who works for Ravi Zacharias International Ministries and the Gospel Coalition UK and who experiences same-sex attraction, writes this:

[Homosexuality] is a gospel issue. When so-called evangelical leaders argue for affirmation of gay relationships in the church, I’m not saying they’re not my kind of evangelical, I’m saying they are no kind of evangelical…. [W]e must never allow ourselves to think of this as just another issue Christians are free to differ over.

I now believe that incommensurable differences in understanding the very meaning of the Gospel of Jesus Christ, the interpretation of the Bible, and the sources and methods of moral discernment, separate many of us from our former brethren…. I also believe that attempting to keep the dialogue going is mainly fruitless. The differences are unbridgeable.

Hawkinson isn’t the only heretical religious leader in the ECC. North Park Seminary, the seminary affiliated with the ECC, has professor Michelle Clifton-Soderstrom, who teaches young seminarians that homoerotic activity and relationships please God. And at the end of April 2017, North Park University chaplain, Judy Nelson, officiated at a same-sex faux-wedding between two men in defiance of the ECC’s (and Jesus’) position that marriage is the union of one man and one woman.

In my mind’s ear, I can hear the gasps of some who will find it unseemly that I would refer to people as “nice” and “kind” as Hawkinson, Clifton-Soderstrom, and Nelson as wolves. The real problem, however, is that too few Christians recognize that these faith leaders are wolves. It’s as if Christians who have read Scripture still do not recognize that ravenous wolves will look like sheep.

“See to it that no one takes you captive by philosophy and empty deceit, according to human tradition, according to the elemental spirits of the world, and not according to Christ.” ~ (Col. 2:8)

Trouble in the Evangelical Covenant Church

Apology to PCA and Clarification About Heresy
b
a
x
r