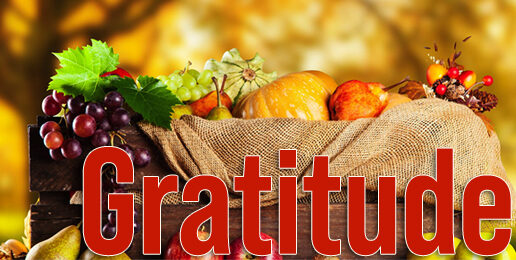 Thanksgiving, America’s wonderful feast and family day, considered by some to be our defining national holiday, is upon us, and most Americans will celebrate in one way or another.  Ironically, I fear too few will do so with a truly grateful heart.  Scriptures are clear that gratitude is not only required of us by God, it is very beneficial as well!  I would suggest that America needs a sincere change of heart regarding gratitude.  Many of us believe that one can or needs to be thankful only when things appear to be going right and well.  This is a serious error!  God expects gratitude from us in good times and in bad!

Gratitude is a funny thing.  It appears to have a life of its own.  By that I mean that a grateful heart bears fruit of itself, often beyond what one’s circumstances might suggest.  God has much to say about gratitude, “In everything,” He says, “give thanks!”

We, on the other hand, tend to let our circumstances determine whether we are thankful or not.  If we believe that things are not going our way, we often see ourselves as victims and develop bitterness.

We must avoid what I like to call a “Haman Complex,” which is a focusing on what we do not have rather than what we do have.  In the biblical book named for Esther the queen, there was a man named Haman.  He was second in authority to King Ahasuerus, who is known in secular history as Xerxes; and in spite of the fact that he had everything a man could desire, and more, Haman was preoccupied with one very insignificant thing he could not have, the worship of a Jewish man named Mordecai.   Haman became so obsessed with the fact that Mordecai would not bow in his presence that he schemed to kill not just Mordecai, but also Mordecai’s people, the Jews.  Instead of being thankful for all the good that he enjoyed, he became occupied with that little thing he did not have, and that ingratitude cost him his life and more.

The point is that one need not actually be in difficult circumstances to be ungrateful.  It is a matter of perspective.  We can live in very trying times and yet be thankful, and we find that that is precisely what God expects of us!

The ingratitude of many Americans must be a horrific screech in the ears of God.  Even the poorest of the poor here live better than most of the world’s population, and more comfortably than even kings did a couple centuries ago.  Things we take for granted, like ice cream and cinnamon, were enjoyed only by royalty or the “super rich” not that long ago.  When those on the bottom of America’s economic ladder have cell phones, microwaves, and flat screen TVs, very few have reason to consider themselves poor.

Are there injustices in America?  Are some taken advantage of by others?  Of course, but God expects us to be grateful, none-the-less!  Should we seek to improve the circumstances of those who are in difficulty, or in comparative poverty, or victims of injustice?  By all means!  But with a grateful heart to Him who has blessed us all beyond what any of us deserve.

One significant source of the ingratitude in many Americans’ hearts is the tragic notion that this world is all there is.  Carl Sagan’s “the cosmos is all that is, or was, or ever will be,” is empty of hope and purpose.   Anyone who succumbs to this lie will naturally be frustrated and angry when things don’t go as well as he wishes, or when he sees others enjoying greater prosperity.  I suppose that it might be considered normal for people to be angry if they believe their only chance for pleasure and happiness is slipping through their fingers. This is only one of the deadly fruits of atheism and secular humanism.   And sadly, too many who profess to be Christians are chasing the same empty goals as the world.

On the other hand, gratitude has numerous benefits.  First, it pleases God, which is its own reward.  Second, a grateful person often discovers that he has more to be thankful for than he first thought.  Third, the grateful person usually finds that the list of things for which he can be thankful expands with time, and some of the troubles in his life either fade, or he discovers they have a silver lining hidden from the ungrateful eye.

Regardless of one’s circumstances God expects us all to be thankful.  Such gratitude reveals trust in God and His promises and pleases Him.  The reality of injustice and unfairness does not change this requirement.  Ingratitude is an acid that eats away at a person from the inside and produces no good whatever.  At the same time, a grateful person need not be passive about the wrongs against him and others, and it is appropriate that we all seek ways to correct those things that are not as they ought to be; but there is never an excuse acceptable to God for ingratitude, regardless of the difficulty of one’s circumstances.

A grateful heart is a blessed heart that finds reason for joy even in the midst of trials.  This is one mark of true faith!