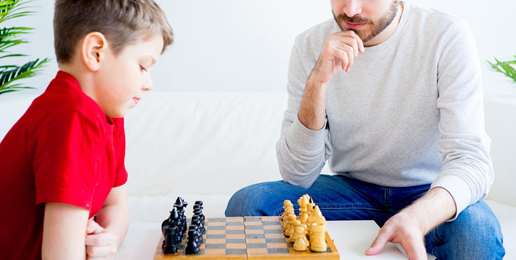 Earlier this year, I decided to teach my young boys how to play chess. I had made an earlier attempt, but it was probably premature. This time around they caught the bug and now love to play on a regular basis.

At one point early in the process of learning how to play, Timothy (age five) said he wished the pieces could move any way he wanted. In other words, he didn’t want there to be any rules! I had to explain that if the pieces could move however we wanted them to, the game would always end on the first move. After all, if anything goes, the player who moved first would simply capture the opponent’s king with any piece of his choice. There would be absolutely nothing to prevent it. Interestingly, the very thing that Timothy thought would give him maximum freedom (no restrictions on how he could move his pieces) would literally make the game pointless and unplayable.

Within the confines of the rules, however, players have enormous freedom—freedom that would be literally impossible without the rules.

It’s counterintuitive, really. We want freedom. We want our own way. It’s against our nature to embrace limitations of any kind. And yet, sometimes it’s the limitations that make the good stuff possible. In the case of chess, it’s the rules—the limitations on our “freedom”—that make it one of the most fascinating games ever invented, with virtually limitless possibilities. No rules or restrictions would mean unpredictable chaos at best, and utter pointlessness at worst.

It’s not just games that benefit from rules, however. Life is like that as well. God, as our loving, gracious Creator, has given us certain rules to live by. Yes, we can break His rules, but the result will never be what we could have enjoyed had we followed His commands and principles. The limitations are an essential part of enabling us to experience the best—and most fruitful—life possible.

Take marriage as an example. One of God’s instructions for husbands is to not be bitter against our wives (Colossians 3:19). I could view that as a restriction on my freedom as a husband. After all, it’s a negative command—something God tells me not to do. Could I choose to assert my will against God’s, reject His limitations, and become bitter toward my wife? Absolutely. And if my wife and I have had an argument, it might even feel good in the short-term to nurse some bitterness. The result, however, isn’t going to be good. I’ll not only be sowing the seeds of marital disintegration if I persist in harboring the bitterness, I’ll also be sowing the seeds of my own misery. But if I choose to accept God’s limitations on my behavior, I’ll reject bitterness, choose reconciliation, and enjoy a strong marriage that becomes all God wants it to be. That’s real freedom.

Our culture thinks of freedom as the ability to do whatever we want without restrictions—just like what Timothy wanted on the chessboard. The Bible, however, gives a different perspective. We’ll either be slaves to sin, or we’ll be servants of Christ. In other words, as human beings, we’re going to serve something. The question isn’t if we’ll serve, but what (or Who) we’ll serve. Interestingly, however, Christ offers humanity true freedom, while sin leaves us in bondage.

Genuine freedom, viewed from a Biblical perspective, isn’t about living any way we want. It’s about finding freedom in Christ and living within the limitations of God’s laws and principles. Some people reject that as too limiting. In their view, Christianity is a religion of rules and regulations. What they ignore, forget, or don’t realize is that these restrictions are meant to protect us from the genuine bondage of slavery to sin.

I’m not talking about salvation. We don’t earn God’s favor by following the rules. Christ took care of the penalty for sin when He died on the cross in our place. Instead, I’m talking about experiencing the freedom that comes from living life the way our Creator intended it to be. After all, He’s the One who made it all and He knows what’s best.

Is there some area of life where you’re tempted to reject God’s limitations on your ability to live as you please? If so, realize that by rejecting God’s instructions, you’ll be choosing bondage to sin. If it doesn’t feel that way yet, give it time. The Bible does tell us that sin provides pleasure, but only for a season (Hebrews 11:25). Eventually it will leave us enslaved.

I don’t know if Timothy fully understands yet that the rules in chess not only make the game possible, but are also the very thing that makes it beautiful. It’s the same with life. God’s rules don’t rob us of our freedom—they make it possible for us to experience the genuine freedom of life the way He meant for it to be. If that’s not the best freedom possible, I don’t know what is.