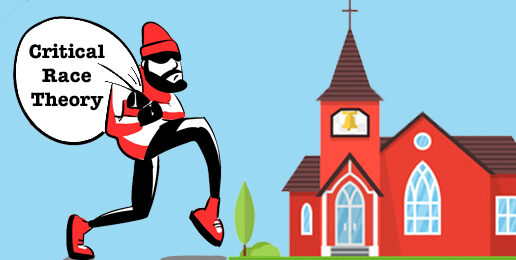 And like racists of yore, they profit handsomely from their efforts to encourage Americans to judge people by the color of their skin.

Leftist change-agents posing as “diversity educators” have captured the wills of corporate executives. Now Big Business is in the business of not only selling goods and services but also in repackaging racism as “antiracism” and browbeating employees into pretending they believe it.

Prior to capturing the wills of corporate execs—not known for their familiarity with or investment in arcane academic theories or for steely-spined moral integrity—leftist change-agents in sullied ivory towers captured the wills of teachers and administrators—not known for independent or “critical” thinking, or for commitments to diversity, inclusivity, or tolerance. In my experience, will-capturing of yellow-bellied teachers and administrators is an almost effortless task. All it takes is a bit of name-calling topped by a dollop of mockery, and the spineless among us bend like paper straws dipped in a Big Gulp.

Now states are requiring ongoing critical race theory (CRT) indoctrination for staff and faculty. Schools are forcing white students to engage in exercises designed to make them feel shame for their skin color (goodbye self-esteem movement).  And schools are racially segregating students in what are euphemistically called “affinity” groups. “Separate but equal” has returned with a vengeance thanks to vengefully regressive “progressives.”

That probably explains why administrators and faculty said next to nothing when the increasingly woke, decreasingly conservative evangelical Wheaton College held a racially segregated pre-graduation ceremony for colorful people on May 8, 2021, which was advertised as “RACIALIZED MINORITY RECOGNITION CEREMONY” (all caps in original) and held in the campus chapel. While it was created “Especially for undergraduate students, staff, and faculty of color,” the school provided “limited seating” for colorless people. I wonder if those seats were way in the back.

One Wheaton faculty member who likely loves Wheaton’s embrace of re-segregation is associate professor of philosophy and critical race theorist Nathan Cartagena who was recently interviewed for leftist Christian Jim Wallis’ Sojourners’ magazine. In this interview, Cartagena explained how he sussed out Wheaton’s friendliness to CRT by delivering a visiting lecture on controversial critical race theorist Tommy Curry during the interview process:

I wanted to see: Is this a place that would welcome such reflection? I received a warm welcome from the students, my department, etc., so I thought “OK, this is a place where I can do this.”

And by “do this,” Cartagena meant, not expose students to the debate on CRT, but to promote CRT:

I taught a reading group my first year at Wheaton that involved one of the important texts in the critical race theory movement, Faces at the Bottom of the Well by Derrick Bell. The following year I asked if I could teach a half-semester class on critical race theory—I got a full thumbs up.

Sowell described the academic transformation of Bell, attributing it largely to his scholarly inadequacy at Harvard:

As a full professor at Harvard Law, Derrick Bell was … surrounded by colleagues who were out of his league as academic scholars. What were his options at this point?

If he played it straight, he could not expect to command the respect of either the faculty or the students — or, more important, his own self-respect. …

Derrick Bell’s options were to be a nobody, living in the shadow of more accomplished legal scholars — or to go off on some wild tangent of his own, and appeal to a radical racial constituency on campus and beyond.

His writings showed clearly that the latter was the path he chose. His previous writings had been those of a sensible man saying sensible things about civil-rights issues that he understood from his years of experience as an attorney. But now he wrote all sorts of incoherent speculations and pronouncements, the main drift of which was that white people were the cause of black people’s problems.

Cartagena openly admits the cunning way he gets his students to accept CRT:

When I was first teaching on CRT, I was very explicit about when something was a CRT essay or quote. Now, one of the things I do is I present CRT literature without telling students that it’s CRT literature. Then I ask them what they think about it. The overwhelming response from the students is: “Wow, this essay is so rigorously researched, so clear, and so well-argued. Even if I don’t agree with every claim, I learned so much,” etc. Then, after they’ve sung a little praise song, [laughs] I tell them they’ve read a piece by a critical race theorist. You can see a look of disillusionment set in — this part gets really hard, if I’m honest. On the one hand, it’s a healthy destabilization. You’ve gotta remember that a lot of my students are racialized white folks. If they’re not now going to say that everything they just said was false, how do they reckon with believing there are things to learn from critical race theorists while knowing that the stakes, in some of these communities they’ve been a part of, are so high that to say such is to find themselves ostracized?

While this tactic appears to be a means to enable students to approach ideas objectively, with a mind decluttered and “decolonized” by the detritus of white privilege and systemic racism, educators know it’s a tactic that can be used to propagandize. Presenting students with an interpretive lens beclouded by jargon, ambiguous language, assumptions, and subtexts with which students have no familiarity doesn’t educate; it indoctrinates.

At least as offensive is Cartagena’s evident pleasure in “destabilizing” his students and emotionally manipulating them by manufacturing cognitive dissonance.

Enquiring donors and parents considering sending their children to Wheaton may want to know if Cartagena spends equal time having students study any of the many works of criticism of CRT like Cynical Theories: How Activist Scholarship Made Everything About Race, Gender, and Identity—and Why This Harms Everyone or Voddie Baucham’s book Fault Lines: The Social Justice Movement and Evangelicalism’s Looming Catastrophe.

Anthony Esolen, professor and writer-in-residence at Magdalen College of the Liberal Arts, senior editor at Touchstone Magazine, and contributing editor at Crisis Magazine, opposes the teaching of CRT in schools:

The problem is that the schools shouldn’t be teaching any “theory” of human behavior at all, for two principal reasons. First, the students do not have anything close to the learning or the broad human experiences that would serve as evidence for checking the theory. For the same reason why it is pointless, and perhaps destructive, to teach literary theory to young people who have hardly begun to read literature at all, because they have no evidence or experience from which to judge the theory, and they will instead be prone to force what literature they do encounter to fit the predeterminations of the theory, so it is pointless, and probably destructive, to teach some theory of human behavior to children who need first to have the experiences, personal or vicarious, that the theory purports to explain.

But the second reason … is more grave. It is that human behavior does not admit of that kind of theory at all. I am not talking here about moral philosophy, or about anthropological observations, or about history and its more or less reliable guidelines. All “theories” of human behavior are necessarily ideological and reductive: whether it’s from Skinner or Marx, it doesn’t matter. The simplest things we do in a given day are steeped in so many motives, passions, thoughts, physical exigencies, and moral commitments, we dare not simply paste a label on them to explain them away and have done with them.

There are glimmers of hope that Americans on both the right and left may be approaching their limits with the racist “antiracism” movement. Virtually everyone on the right and increasing numbers of people on the left are fed up with the ubiquitous manifestations of critical race theory. Americans see CRT is corrosive and divisive. They see CRT is being used to control discourse. And they see that “progressives” are passing CRT off as inarguable, objective truth. “Progressives,” in control of most of the levers of power and influence, feel no obligation to debate CRT’s arguable assumptions. Nor will they acknowledge that CRT is arguable as they use hard-earned tax dollars to promulgate it in government schools. And hoo boy, are they promulgating.

Join us in Collinsville on Saturday, May 22nd for an IFI Worldview Conference about CRT! 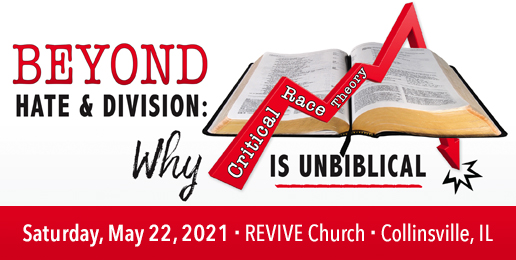