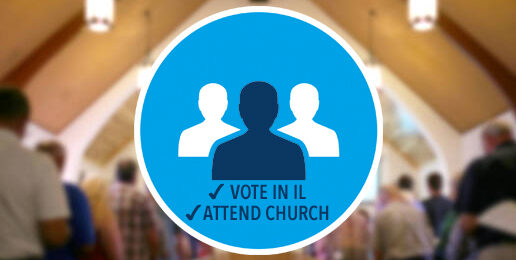 In a previous article, I focused on an important poll that IFI and other groups commissioned, which surveyed 600 registered voters in Illinois.

Reflecting on this poll, I want us to consider why we are where we are as a state.

We often lament how this great state is so stupid. You likely have friends and family that have abandoned ship before it sinks, moving to states much more friendly to sanity, reason, and freedom.

In the midst of so much foolishness and folly, it is good to consider that even though our state is on the decline in many ways, we still are an important state. According to Wolfram Alpha, Illinois has a population of 12.67 million. This is equal to the total population of Iowa, Indiana, and half of Wisconsin. The GDP of Illinois is $863.5 billion which is almost equal to the combined GDP of Iowa, Wisconsin, and Indiana ($904 billion).

So why are in such a moral and fiscal mess?

Well, according to the recent poll, only about 1 in 3 registered voters in Illinois attends church weekly or more than once a week.

This translates to less than 1 in 3 residents and citizens of Illinois who hear the Word of God faithfully proclaimed and are part of the public worship of the only true God. When we are not hearing God’s Word, what is going to happen to a society? Given this lack of worship of the true God in our state, why would we expect things to be different? God has given this state what we want and the consequences that are part of our rebellion.

Those consequences include a year in which we were gripped by fear of COVID-19 and controlled by our leaders. We now have a public education system that is increasingly at war with God and His truth. And, even though our state is stagnant in terms of population growth, the number of abortions performed in Illinois increased by over 4,000 from 2016 to 2018.[1] That is over a 10 percent increase when our population did not increase by the same amount. We rightly mourn the loss of lives from COVID-19 and other diseases, while the deaths of over 116 babies by abortion is just a statistic too many.

There are no quick and easy answers to the mess we face as a state. For the sake of life, we must stand against changes to laws that would facilitate more teenagers getting abortions. We must, for the sake of our Christian witness, be part of a church that is faithfully preaching the message of the gospel and seeking to spread the good news of salvation. And Christian parents must ensure that their own children are being trained in the fear of the Lord.

Humble yourself often before the Lord and do His will.