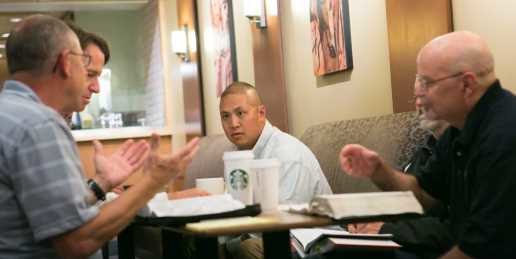 Christians Should Be Eager To Get Involved in Cultural Transformation
Written By David E. Smith   |   03.06.17
PRINT

The American Culture and Faith Institute (ACFI) released a fascinating survey recently revealing that 95 percent of “Spiritually Active, Governance Engaged Christian Conservatives” or “SAGE Cons” are not satisfied with the state of American culture today. While this finding may not be surprising, what may prove to be informative and encouraging is that 67 percent of these “SAGE Cons” desire to be more directly involved in “cultural transformation” here in the United States.

Today’s social media news-feeds show much conversation over current events, and inevitably, some discussions become heated and even hostile at times. With social media readily available, some people may wonder if political engagement online is productive—especially for those of us who desire to be a positive influence on the culture at large.  Unfortunately, I know some Christians who have fled social media precisely because they are unwilling to take a stand.  In effect, they are hiding their light under a bushel.

On one hand, we understand how easy it is to get fatigued. Pew Research Center released findings that show one third of social media users are “worn out” by political content. Fifty-nine percent of respondents in the Pew survey say that discussions with those in which they are in disagreement are “stressful and frustrating.”

Undeniably, social media is a vital tool if used properly and in moderation. However, we should also keep in mind there are many other ways we can effectively inspire “cultural transformation” in our state and nation.

How can we inspire “cultural transformation?”

Invest in your family and close relationships. It was recently reported that Barbara Bush, daughter of President George W. Bush (43), spoke at a fundraiser for Planned Parenthood in Fort Worth Texas.  While we know former President Bush is pro-life, we also know how liberal his wife’s political views are. Evidently, Momma Bush did a better job passing down her worldview to her daughter than did Poppa Bush. What a missed opportunity!

Deuteronomy chapter six teaches us that we should intentionally and diligently teach our children and grandchildren a love of the Lord and His commandments.  We are to teach them so that they do not forget what God has done and so they will live according to His Word.

Investing in our families, churches, and even in our neighbors and neighborhoods is a great first step to inspire the “cultural transformation” that God desires.

Hold elected leaders accountable. It can be tempting to think that our civic duty ends the moment we cast our ballots; however, it is critical that we do more. Our elected leaders need to hear from us before they make important decisions regarding policy and law. In order to take part in informed conversation and correspondence with legislators and government officials, keep up-to-date on local news and be on the lookout for IFI action alerts that detail ways you can engage legislative leaders. The IFI Action Center lists current action items and provides a simple way for you to contact your elected officials.

Serve the community. There are many ways you can influence the culture as you serve in your community. If you have a heart for women facing unplanned pregnancies, search online for a pregnancy care center near your home. Perhaps you might consider helping in a soup kitchen or rescue mission. Often community centers need volunteers for ESL classes or after school tutoring. The local church also offers a multitude of areas in which you can serve and invest in the culture.

And of course, there is a desperate need for Christian citizens to serve in elected office. A favorite quote underscores this point powerfully:

Have you ever wondered why we have so many foolish and dishonest lawmakers in office? It is because wise and honest citizens are not stepping up to fill these spots.  This void creates a vacuum which is filled too often with the lowest common denominator.  Many of us who are well-qualified for public service are wasting a valuable opportunity.  Consider this exhortation from our Founding Father:

“It should be the highest ambition of every American to extend his views beyond himself, and to bear in mind that his conduct will not only affect himself, his country, and his immediate posterity; but that its influence may be co-extensive with the world, and stamp political happiness or misery on ages yet unborn.”  ~ George Washington

Civic engagement is an essential part of the Christian life and witness. If we neglect our civic responsibilities, our freedoms, including our civil right to shed the Light of Christ in our communities and throughout our nation, will be destroyed and the light of Christian witness will grow dim.

The situation we face is difficult, but we are not without hope! Let’s renew our efforts to engage the culture around us and also determine to be open to new ways of service that will effectively increase the well-being of our society.

IFI is partnering with pro-life advocates to put up pro-life billboards throughout the Chicago metro area with the simple and bold statement “Abortion Takes Human Life,“ but we need your financial partnership to make this a success.  Can you help with a tax-deductible donation to this campaign?