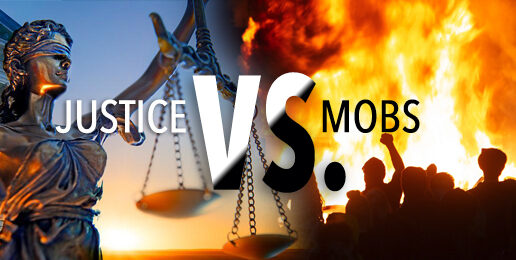 One of the most vicious characters in Charles Dickens’ A Tale of Two Cities is a woman name Madame Defarge. In the beginning, she appears as a diminutive woman who passively spends her time knitting as French nobility commit great injustices against commoners. The reader comes to find out that this woman is storing up bitter resentments and bloody plans for vengeance against her aristocratic persecutors. Through years of oppression, she is quietly knitting a “hit list” of aristocrats whose blood must be spilled in the coming revolution.

Her bloodlust becomes so intense that she begins to sew names on her list that don’t deserve her condemnation. At one crucial turning-point in the story, she adds the name Charles Darnay to the list. She knows of no crimes that Darnay has committed (he’s committed none). She knows nothing of the exculpatory fact that Darnay had renounced his title, his privilege, and the oppressive ways of his uncle. All she knows is that Darnay is the nephew of an evil nobleman. Darnay belongs to the wrong group by birth and therefore must die.

A large part of the drama of A Tale of Two Cities is the depiction of mob justice. What happens when the social order disintegrates, and due process and the rule of law are lost? What happens is that the rights of the accused get trampled under foot. Salacious accusations in service of “the cause” become the pretext for mob actions. The truth of an accusation doesn’t really matter anymore. All that matters is “the cause” and destroying the out-group. The facts be damned.

It is this kind of situation that Proverbs 18:17 speaks to:

“The first to state his case seems right until another comes and cross-examines him.”

The meaning here is pretty clear. It is easy to make accusations, but accusations must be substantiated. That is why the accusations themselves must be probed for consistency and evidence. If there are witnesses, they must be heard and their testimony weighed. All the facts must be brought forth from both accuser and accused. And during the adjudication, the accused must not be presumed guilty based merely on the accusations. It is from this principle that our own norm of due process requires the presumption of innocence on the part of the accused. Without this presumption of innocence, you get mob justice and innocent people’s heads foisted on a pike.

In his new commentary on Proverbs, Bruce Waltke offers a helpful interpretation of this text as well as a contemporary application. He writes,

For justice to prevail, both accuser and accused must be given equal consideration… To cross-examine them means “to probe” the accusers with cognitive and analytical examination and testing (cf. Deut. 19:16-18) and connotes that the search is diligent, penetrating, and difficult because something is hidden and elusive… Those who advocate believing the accuser unconditionally and refuse to cross-examine the complainant vigorously to establish the facts condemn themselves as corrupt…

The recent “Me too” movement that arose in North America resulted in drawing attention to a previously hidden phenomenon of powerful men taking advantage of vulnerable women. However, one of its negative aspects was that some people began touting the view: “Believe all women,” which amounted to accepting their accusations without question. This proverb denies that assertion with its call to vigorously investigate all accusations (p. 281).

Waltke is spot-on both in his exposition and application. We cannot judge guilt or innocence based merely on accusations. Nor can we establish guilt simply because the accused happens to belong to a disfavored group. Justice is not identity politics, nor is it blind credulity in every accusation. Justice requires presumption of innocence and due process. Without that, some form of mob rule will prevail. And that is just as likely to condemn the innocent as it is the guilty.

And this is where we all have to be very careful. Truth be known, we all have a little Madame Defarge in us. Our hearts are prone to partiality in judgment (James 2:9). We are open to believe the best about certain kinds of people and the worst about other kinds of people. Our prejudices can cloud our judgment and lead us to believing accusations without evidence simply because the accused belongs to a group we don’t like. If you fall into that mindset, you may find yourself self-righteously assisting a mob in condemning an innocent person (Prov. 17:15).

Today, the falsely accused usually don’t end up with their head on a pike, but they do often find their character being assassinated by social media mobs. And these mobs can wreak real havoc in a person’s life, family, and employment. Cancellation has real-world consequences, and the cancellers know that—facts be damned. Anyone who cares about justice will embrace the wisdom of the Proverb: “The first to state his case seems right until another comes and cross-examines him.” Therefore, we would all do well to be “quick to listen, slow to speak, and slow to anger; for the anger of man does not achieve the righteousness of God” (James 1:19-20).

Denny Burk has been a Professor of Biblical Studies at Boyce College since 2008. He also serve as an Associate Pastor at Kenwood Baptist Church and as President of CBMW. This article was originally published at his blog.

What Just Happened?
b
a
x
r