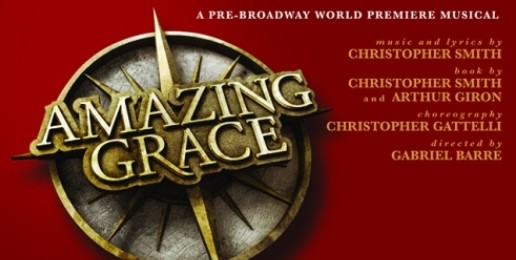 If you begin singing the tune “Amazing Grace,” in church, on the street, or while sitting in a Starbucks, practically everyone around you would recognize the song. But if you asked those same people who John Newton was, they’d probably have no idea. And yet, the life of the slave ship captain turned Christian abolitionist and hymn writer is one of the most amazing lives ever lived.

That’s why I was so thrilled to attend the opening night performance of “Amazing Grace”—a musical about John Newton’s life—at Chicago’s Bank of America Theater. As someone who has seen many a Broadway production, I would have to say that Amazing Grace is one of the most incredible plays I have ever seen. It is a first-rate example of why Christians MUST become more active in the arts.

The musical tells the story of how young John Newton, a brutal slave ship captain, underwent a spiritual transformation when his ship nearly sank during a storm off the coast of Ireland in 1748. As the ship filled with water, Newton cried out to God to save him. After he’d returned to England, Newton eventually joined William Wilberforce in the long effort to abolish the British slave trade.

As a writer myself, I’m especially impressed with how the creators of Amazing Grace have created a story that’s historically accurate, but which also flows the way a theatrical musical production must flow. The young actor who plays John Newton, Josh Young, is a staggering voice and talent—in fact, he’s probably got the strongest voice I have heard on a stage.

Let me also say that the ending of the first act is one of the most incredible things I have ever seen in the theater. I won’t spoil it for you, but it involves Newton’s rescue from the storm that causes him to turn to God. The moment is visually magnificent, one of those things you’ll never forget and will tell everyone about once you’ve seen it. It’s stagecraft at its finest.

The musical also does a great job describing the love story between John Newton and his childhood sweetheart, Mary Catlett, who longs for Newton’s conversion. But Amazing Grace doesn’t sugarcoat the horrors of the slave trade, nor the role that Africans themselves had in selling their own people to white slave traders.

The play brings in God, but in such a way that playgoers will feel attracted to Him—so it’s absolutely not a play only believers will be interested in seeing. Christians will love it, yes, but it’s also the perfect play to bring a nonbeliever to. And that is incredibly rare.

At the end of the show, the entire cast and audience sing “Amazing Grace” together. And that is an experience I will never forget.

Chuck Colson often said that Christians must be engaged in the arts, because our gifts witness to the truth of God’s love and salvation to people who would never think of setting foot in a church. In effect, their defenses are down, and their hearts more likely to be open to the truth.

Plays like Amazing Grace come along only about once a decade, if we’re lucky. If you live anywhere near Chicago, you’ve got to see it. But you’ve got to act fast because the show is scheduled through this Sunday only. I don’t know where the play is headed next, but when I find out, I’ll be sure to let you know.

So get a ticket. Take your church youth group if you can. Take your non-believing friends and then talk about the play’s meaning over a late dinner. Be ready to answer their questions about the hour YOU first believed, and the meaning behind those immortal words: I once was lost, but now am found, was blind, but now I see.”

Amazing Grace Amazingly Staged: Why Christians Must Be Involved in the Arts
This is a great opportunity for believers to support artistic efforts that are well-crafted, well-produced, and provide a positive influence within the arts community. If you live in the Chicago area or you’re going to be nearby, go see the musical Amazing Grace. Details below.

Amazing Grace: The Song the World Knows, the Story it Doesn’t
Bank of America Theater, Chicago

AVAILABLE AT THE ONLINE BOOKSTORE