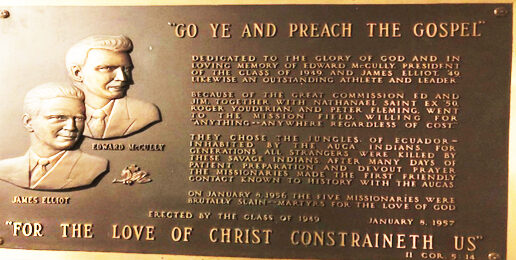 The esteemed evangelical Christian Wheaton College is really woking up. The administration has removed a plaque honoring Wheaton alumni and missionaries Jim Elliot and Ed McCully because it described as “savage” the indigenous Ecuadorian tribe that brutally and without cause speared Elliot, McCully, and three other missionaries to death in 1956. The plaque, which was donated 64 years ago by Wheaton classmates of Elliot and McCully, read:

For generations all strangers were killed by these savage Indians. After many days of patient preparation and devout prayer, the missionaries made the first friendly contact known to history with the Aucas.(“Auca” is the Quechua word for “savage” and was the name used at the time by indigenous people to refer to the Waorani tribe.)

Wheaton College president Philip Ryken, who appears to be either unable or unwilling to stem the efforts of Wheaton’s “social justice” faculty warriors to awoken Wheaton, said this about the decision:

Recently, students, faculty, and staff have expressed concern about language on the plaque that is now recognized as offensive. …The word “savage” is regarded as pejorative and has been used historically to dehumanize and mistreat Indigenous peoples around the world. … Any descriptions on our campus of people or people groups should reflect the full dignity of human beings made in the image of God.”

I guess no more calling people sinners with deceitful and desperately sick hearts on the Wheaton campus.

When President Ryken defends Wheaton’s decision by claiming the word “savage” is now considered a “pejorative,” he makes two errors. First, “savage” always was considered a pejorative. When in the history of the church, or America, or Ecuador did anyone consider the descriptor “savage” non-pejorative? It is not, however, an epithet like the “n” word.

Second, he errs by acquiescing to the woke mob who seek to dishonestly use Christianity as a weapon to silence all condemnation of sin. In so doing, he has inadvertently caved to relativism. Does President Ryken believe that Christians should refrain from using any and all terms that the world now views as “offensive”?

According to Wheaton spokesman Joseph Moore, this decision was made following the griping of a mere “dozen students and staff.” It would be interesting to know which staff members agitated for this change. Parents who may be considering spending a boatload of money to send their children to the increasingly woke Wheaton and donors who oppose the woke movement might find such information helpful.

The word “savage” means “not civilized” or “ferocious, violent, or brutal.” The tribe called the Waorani or “Auca” that brutally killed Jim Elliot, Ed McCully, Nate Saint, Roger Youderian, and Pete Fleming was at that time, indeed, savage.

While the complicated story of what happened to the Waorani people since the savage murders of five missionaries is little known by many Christians who know the story of Jim Elliot and Nate Saint, the fact that the Waorani were a savage people in the 1950s and earlier is not disputed.

Retired Wheaton College associate professor of history and PCUSA-ordained minister Kathryn T. Long has written a well-reviewed book about the complex history of the Waorani people since the murders of the five missionaries. She makes clear that they were a violent (i.e., savage) people. In a review of her book, Professor John G. Turner writes,

More than 60 percent of Wao deaths during this period were violent ones, [Long] estimates, making the Waorani one of the most violent cultures on earth.

A 2008 paper co-authored by eight scholars including Long, describes the Waorani tribe:

The Waorani may have the highest rate of homicide of any society known to anthropology. … The Waorani (Huaorani, Waodani, Auca) of Ecuador, are known to be even more warlike than the Yanomamo. … Their reputation for ferocity was earned by violence against each other as well as outsiders.

Even one of the Waorani who killed the missionaries acknowledges the former savagery of the tribe:

We lived angry, hating and killing, ‘ononque’ (for no reason) until they brought us God’s markings. Now, those of us who walk God’s trail live happily and in peace.

The now-cancelled Wheaton plaque was clearly referring to a moment in history when the Waorani were savage, which they inarguably were. But the woke, like all doctrinaire propagandists, insist on manipulating history to advance their ideology.

The Roys Report interviewed a current Wheaton student on the plaque controversy who expressed some peculiar unbiblical notions about how Christians may talk about sin:

“Wheaton’s doing a better job of trying to be mindful of the language that they’re using and how it harms people, especially indigenous people. … I don’t think reducing them to their violent tendencies is humanizing because they’re still created in God’s image. It’s also holding them to a Christian standard when they’re not Christians. They’re still people and they’re living life that is not the same as ours. Holding them to our standards wouldn’t necessarily be fair.”

What would this student think of Jonathan Edwards referring to “wicked unbelieving Israelites”? Was he using language that harms people? Was he reducing them to their wicked tendencies and dehumanizing them?

May Christians call false prophets “ravenous wolves” as Jesus did?

Should Christians today abstain from criticizing the “trans”-cult—including “drag queens” who read stories to and twerk in front of toddlers—because they’re not Christians and, therefore, we ought not hold them to “our standards”?

Are standards regarding savage acts “ours,” or are they absolute, objective, transcendent standards applicable to all?

What about past slaveholders or contemporary neo-Nazis? If, when referring to their wicked beliefs and acts, Christians don’t include a comprehensive list of their good qualities, are those believers guilty of dehumanizing reductionism?

In Revelation, those who are not saved are called “dogs.” Peter describes false teachers—of which we have many in the church today—as “irrational animals … born to be caught and destroyed, blaspheming about matters of which they are ignorant. … They are blots and blemishes. … Accursed children!” Paul calls the Galatians, “foolish Galatians.” John the Baptist called the multitudes a “brood of vipers.” Amos called women fat “cows” and warned that God would take them away by harpoons or fishhooks. Paul wrote this to Titus: “As one of their own prophets has said, ‘Cretans are always liars, evil beasts, lazy gluttons.’ This testimony is true.” In other words, Paul called Cretans liars, evil beasts, and lazy gluttons.

Were John, Peter, Paul, Amos, and John the Baptist insufficiently mindful of their use of harmful dehumanizing language? Are they unfairly holding non-believers to “our standards”?

In other words, he both held unbelievers to God’s standards and described believers by their past sinful acts. They were sexually immoral, idolaters, adulterers, homosexuals, thieves, greedy, drunkards, and swindlers.

As reported by the Associated Press,

Current student Caitlyn Kasper praised the decision to remove the plaque. “Plaques like that have caused pain to people and are almost a symbol of white superiority in their very presences and in how they make people of color feel unwelcome at Wheaton.”

Does such a plaque cause pain to people? Do people untutored in the doctrine of wokeness espoused in public schools via Critical Race Theory feel pain when seeing this historically accurate plaque? Or is it just the indoctrinated who claim to feel faux-pain?

Is there something intrinsically wrong about feeling pain when confronted by one’s own sin or encountering testimonies of past sinful acts committed by humans?

Those who have connections to Wheaton College know that this is merely another step in its ongoing Great Awokening. Wheaton has been churning out social justice warriors since at least Obama’s presidential tenure. As the mother of two Wheaton graduates and mother-in-law of two, I say that with no pleasure.

I first wrote about Wheaton’s cultural capitulation in 2010 when the social justice manifesto of the Department of Education was discovered, a “conceptual framework” rife with the woke rhetoric polluting government schools everywhere today.

The comments from these two current Wheaton students point to the larger problems at Wheaton and raise important questions. How is it that Wheaton students are so biblically ignorant and so woke? Is Wheaton continuing in its abolitionist history of boldly confronting and opposing sin at any cost—especially those serious sins that currently find favor among the well-heeled and powerful? If so, why do we hear so little coming out of Wheaton College from either the administration, faculty, or students about the grievous harm and injustice being done to children by the homosexuality community and “trans” cult? Could it be that Wheaton is tutoring students in the ways of soft-peddling biblical views of sin while scratching itching ears?