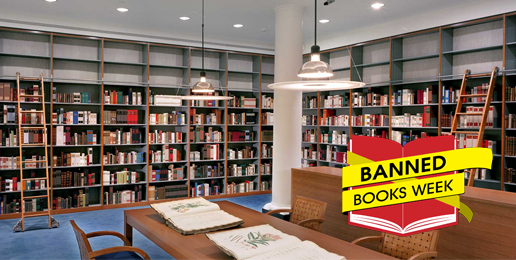 Warning: not for young readers

September 23-29 is the ominously and inaccurately named Banned Books Week established by the book-banning American Library Association (ALA) to suggest that book banning is prevalent in America and very scary.

Although the ALA named it Banned Books Week, it acknowledged in the “about” section of the Banned Books Week website that it’s not really about books that have been banned à la Fahrenheit 451 or even asked to be banned. It’s centrally about books that have been challenged, which is a horse of an entirely different and far less dark color. A book is challenged when the appropriateness of it in some context is questioned.

Of course, the book banners at the ALA hope that no one notices the book banning they do through de facto book-banning protocols called Collection Development Policies (CDPs) that coincidentally align with the “progressive” biases of many librarians. (FYI, the field of library science is decidedly not ideologically diverse; it’s dominated by “progressives.”)

Most parents who challenge books are not requesting that they be banned. Most parents are requesting one of three things: 1. that a book be moved to an adult section of the library, 2. that a library not use its limited resources to purchase a particular book, or 3. that a publicly funded school not select a particular book to be taught. Parents are not requesting that publishing companies be prohibited from publishing book titles, that parents be prohibited from purchasing them, or that booksellers stop selling them.

“Progressive” book-banning librarians count on community members not realizing that books that are never purchased can’t be “banned.” So, when school and community libraries refuse to purchase or request books that espouse conservative beliefs about the nature and morality of, for example, homosexuality or cross-dressing, there’s no opportunity for “progressives” to “ban” books. Their “banning” is achieved prior to the purchase of books. It’s far more comprehensive. And it’s much more cunning. Through CDPs, librarians effectively ban books they don’t like (i.e., conservative books) with nary a controversial word messily spilling out into the public square. If CDPs resulted in no books being purchased that espouse liberal beliefs about sexual deviancy and confusion, you can bet your bottom dollar that ALA members would be having conniptions.

One of the purportedly “banned” books that’s been getting a lot of press lately is The Absolutely True Diary of a Part-time Indian by Sherman Alexie—a book taught in many 7th-, 8th-, and 9th-grade public school classes. The novel is not utterly devoid of good qualities. It addresses some important issues regarding racial discrimination, poverty, conformity, inclusion, friendship, independence, and resilience, and it does so with heart and humor. But it also contains much to render it unsuitable for inclusion in public school curricula.

I want to make clear that not selecting a book to include in a school curriculum is not equivalent to book banning. If not selecting books did constitute book banning, then “progressive” English teachers and librarians are the ethical equivalent of Fahrenheit 451 firemen because they routinely engage in the non-selection of books.

The first problem with the The Absolutely True Diary of a Part-time Indian is that it is written at about a fourth-grade level. Any late middle school or early high school teachers who select it reveal both a lack of confidence in the intellectual ability of their students and a willingness to acquiesce to the dumbing down of academic standards. Appealing to the emotions and baser impulses of adolescents is the last refuge of lazy, uninspiring, and unaspiring academic scoundrels.

Second, Alexie’s book contains language and ideas to which no educator should intentionally expose students. Yes, I know the tired rationalization: “This is authentic adolescent language.” This rationalization should raise some questions: If the author is justified in using such language to portray authentically adolescent culture and emotional experiences, then why aren’t students justified in using such language in school in order to be authentic and to express adequately and accurately their emotional truths? And why aren’t teachers allowed to use this kind of language, since it also represents authentic adult language and experience? In fact, society euphemistically refers to profanity and obscenity as “adult language.”

Here’s an idea to help teachers determine which novels and plays they should recommend or teach to other people’s children: If a novel or play contains language and imagery that cannot be read aloud over the public address system, used in the hallways, spoken at school board meetings, or printed in our newspapers, they should not recommend or teach it to other people’s children.

So, let’s put The Absolutely True Diary of a Part-time Indian to the test. Let’s have superintendents, principals, school board members, and students read these passages over the public address system, at an assembly, or at a school board meeting:

I’m proud of it.
I’m good at it.
I’m ambidextrous.
If there were a Professional Masturbators League, I’d get drafted number one and make millions of dollars.

“Did you know that Indians are living proof that nig***s fu** buffalo?”

I headed over to the library bathrooms because they’re usually a lot cleaner than the ones by the lunchroom. So, okay, I’m going number two, and I’m sitting on the toilet, and I’m concentrating. I’m in my Zen mode, trying to make this whole thing a spiritual experience. I read once that Gandhi was way into his own number two. I don’t know if he told fortunes or anything. But I guess he thought the condition and quality of his number two revealed the condition and quality of his life.

“Kid, you better keep your hands out of my daughter’s panties. She’s only dating you because she knows it will piss me off. So I ain’t going to get pissed. And if I ain’t pissed then she’ll stop dating you. In the meantime, you just keep your trouser snake in your trousers and I won’t have to punch you in the stomach.”

I gathered up my books and followed Miss Warren out into the hallway. I was a little worried. I wondered if I’d done anything wrong….”

She hugged me hard. And I have to admit that it felt pretty dang good. Miss Warren was, like fifty years old, but she was still pretty hot…. So I sort of, er, physically reacted to her hug. And the thing is, Miss Warren was hugging me so tight that I was pretty sure she could feel my, er, physical reaction. I was kind of proud, you know?

Ah, literature at its finest, most sublime, and inspiring.

Many “educators” attempt to justify the inclusion of Alexie’s book by citing its National Book Award. This common strategy should raise several more important questions: What were the criteria used for determining the winning novel? How many people served on the committee that awarded the honor to The Absolutely True Diary of a Part-time Indian? And what were the ideological leanings of those who made that decision?

This justification calls for a serious, open, and honest examination of the ideological monopoly that controls academia and the elite world of the arts and that has resulted in censorship of conservative perspectives. To offer as justification for teaching a text its garnering of literary prizes or ALA approval without acknowledging that those who award the prizes or who belong to the ALA are generally of the same ideological bent is an exercise in sophistry.

Furthermore, this justification represents a common fallacy called an “argument from authority” which relies on the word of an expert or authority rather than on evidence. The fallacy goes something like this: This teacher made the decision to teach this text, and he is has won a Golden Apple Award, or the school board has decided to allow this book to be taught because it won a  National Book Award. The fallacy lies in the fact that honors can be awarded based on specious criteria, and teaching abilities do not guarantee sound judgment. Really smart people can make really chuckleheaded decisions.

In the extensive body of literature from which English teachers can choose, surely they can find books that address substantive issues without resorting to adolescent potty humor, sexual vulgarity, and the use of language that civilized people do not use in private or public.

Parents who object to the inclusion of texts in libraries, sections of libraries, or classrooms due to obscene language, sexuality, or highly controversial messages are not engaging in inappropriate censorship. All educators evaluate curricular materials for objectionable content, including language, sexuality, and controversial themes. The irony is that when librarians and teachers decide not to select a text due to these elements, the choice constitutes an exercise in legitimate text-selection, but when conservative parents engage in it, they are tarred with the label of censor and book banner.

Parents should doubt the veracity and fitness for their roles of any librarians, teachers, administrators, or school board members who claim they will never take into account the nature and extent of profanity, obscenity, sexuality, and controversial themes when choosing texts.