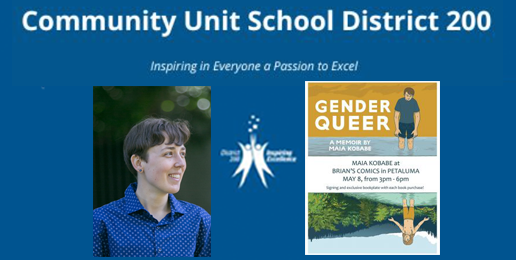 With regard to public schools and sexuality, this is the worst of times. It is an age of incomprehensible and destructive foolishness. It is a season of darkness into which America has been plunged by sexual anarchists like Maia Kobabe whose creepy adult comic book graphic memoir continues to divide communities.

For those unfamiliar with Kobabe’s book Gender Queer: A Memoir, click here to see images that librarians in public school and community libraries all across the country believe are appropriate for preteens and teens to see and for taxpayers to be forced to subsidize.

In obscene images, Kobabe, who has a lesbian aunt and a sister who dates a woman who pretends to be a man, tells the disturbing story of her journey to her disordered “identity” as a genderqueer, asexual person.

In January 2022, two courageous middle school teachers in Community United School District 200 (CUSD 200) in Wheaton, Illinois filed a “Request for Reconsideration of Media” in which they rightly assert that Kobabe’s memoir Gender Queer is “pornographic” and “vulgar” and doesn’t belong in the district’s high school libraries.

Assistant Superintendent of Administrative Services Charles Kyle selected ten staff members to serve on a committee to evaluate the book challenge. The two middle school teachers shared their reasons for the book challenge with the committee, which was composed of Craig Lawrence, John Disanza, Kristin Diaz, Laine Pehta, Melissa Murphy, Traci Burnham, Matt Biscan, and Erica Valenti, after which the committee met twice and then presented their recommendation to retain the obscene book. Some Wheaton taxpayers should find out the vote of each of these CUSD 200 employees.

In their excellent presentation, middle school teachers Brian Wiewiaro and John Ferguson made clear that their opposition to Gender Queer was not born of book-banning impulses or bigotry:

They also pointed out that the CUSD 200 Board of Education policy says,

Students are prohibited from … accessing at school any publication that is socially inappropriate or inappropriate due to maturity level of the students, including but not limited to material that is obscene, pornographic, or pervasively lewd and vulgar, contains indecent and vulgar language.

Wiewiora and Ferguson posed several questions to the committee, including these:

Either those committee members are ignorant or they’re too cowardly to stand for truth in a tyrannical public school culture rife with systemic leftist bigotry.

But it gets worse. The book challenge then moved on to the board of education where six of the seven board members voted to retain Gender Queer. Here are some of the rationalizations offered by adults who lack the courage, wisdom, and intelligence to serve in any school leadership position.

First up was Brad Paulsen who said this:

One of the data points I’ve heard recently, um, that I believe is true—I haven’t validated this, but I’ve seen it in a couple different locations—that 70 percent of our LGBTQ youth are more likely to commit suicide. And so, I thought about the consequences of our vote on those students and those members of our community. And so, I … I kind of asked myself, you know, depending on our vote, can we just help one person, one student that’s going through this, and if we can, that makes me feel good. And so, with those, um, with that thinking and all the conversations we had, when I vote, I’m going to say yes.

I kid you not, Paulsen said that.

Maybe the fact that I’m not a statistician explains why I have no idea what “70 percent of LGBTQ youth are more likely to commit suicide” means. Perhaps at the next board meeting, Paulsen could explain to his community exactly what it means. That should give him ample time to validate the data point he cited.

And perhaps at the next board meeting, he could answer these questions:

Since he used this data point as justification for retaining Gender Queer, should he have “validated” it?

Does he have conclusive, research-based evidence for his bizarre contention that reading Gender Queer will prevent suicides of “LGBTQ” youth?

Since many young adults are detransitioning; telling their tragic stories of suffering and regret; and blaming social media, doctors, and schools for affirming their “trans” identities, should school libraries request from publishing companies books that tell those stories? Wouldn’t Paulsen feel good if one person could be spared such suffering by reading them?

What if reading Gender Queer harms one person? What if reading it exacerbates confusion or contributes to a decision that has permanent and lifelong consequences and which they may later regret? Would the harm done to one such teen be sufficient justification for removing Gender Queer from the high school library?

Will Wheaton high schools purchase other books that include graphic depictions of and dialogue about sex toys and sex acts? Could those books include photos rather than cartoon drawings as long as someone could argue that one person may be helped by reading them? Would Paulsen et al. support the purchase of a memoir that depicts a woman’s journey to becoming a consensual non-monogamist, replete with graphic images of her sexual journey with multiple people? If not, why not?

(As a related aside, do any of the Wheaton high schools carry Abigail Shrier’s important and compelling book titled Irreversible Damage: The Transgender Craze Seducing Our Daughters?)

Board member Susan Booton followed Paulsen and began by asserting her “deep thinker” bona fides, by which she meant that she self-identifies as a deep thinker. The evidence, however, suggests the opposite.

She echoed Paulsen by saying that “the LGBTQ community struggles with suicide and harm to self at a much higher rate than our cisgender peers.” What she seems not to have thought deeply about is whether an obscene memoir carried in a public school library will reduce self-harm.

Booton claims the district must “honor all stories.” Does that include the stories of other underrepresented groups, like zoophiles? If not, why not? They too are marginalized and shamed.

Booton defers to the judgment of “professional librarians” who choose the books for the district’s book collections. She seems to believe that a degree in library science confers on them some special knowledge about and expertise in making moral judgments about obscenity.

What Booton doesn’t share is how the library book collection game is rigged.

Librarians create what are called “Collection Development Policies” that recommend, for example, purchasing books that are “positively reviewed” by at least two “professionally recognized review journals.” Surprise, surprise, the professionally recognized review journals are controlled by leftists who either don’t review or review negatively conservative books.

In addition, publishing companies gatekeep at an even earlier de facto censorship stage. Publishing companies won’t publish books written from a conservative perspective on sexuality, so there are none to be reviewed. Leftists can ban books with carefree abandon because their banning is concealed from the public. Can’t be accused of banning books when you don’t purchase them.

Deep thinker Booton doesn’t see how “removing this book helps” the mental health “crisis that we’re facing in this—in our world.” While helping mental health crises is a noble endeavor, is it the task of public school English teachers and librarians? Does Boone wonder why, during this unprecedented time of approval and even celebration of homosexuality and cross-sex impersonation, “LGBTQ” adolescents are suffering so tremendously? Why aren’t conservative kids whose beliefs and feelings are mocked and scorned in schools and the culture at large experiencing such high rates of suicide? Does the troubling degree of suffering experienced by “LGBTQ” youth not lead Booton to ask hard questions on whether “progressive” sexuality dogma is harming kids?

The board chair, Ms. Chris Crabtree concluded by making the inane argument that the book should remain in district libraries in order to show that “this board cares about kids, it cares about the LGBTQ+ community.”

Choosing to remove one book because of egregiously obscene drawings and dialogue that violate school policy means the school doesn’t care about the LGBTQ+ community? Is the board so myopic and uncreative that they are unable to find other ways to show students they care?

Moreover, does caring require affirmation of all student feelings, beliefs, and volitional acts? Is it the business of public school leaders to affirm arguable ontological and moral assumptions on controversial topics?

There’s a lot of hooey spouted by school leaders struggling mightily to defend the indefensible. They cite prizes awarded to obscene books by leftist organizations as just justification for purchasing, recommending, and teaching garbage to kids. They also cite the lousy decisions of other schools to purchase, recommend, and teach garbage to kids as the reason to follow suit.  Let’s call that the lemming defense.

What was notably missing in all the claptrap was any discussion about the virtue of modesty and whether this book may further erode what little remains of respect for modesty in our coarse, unsafe culture.

Reminder to school boards, administrators, and teachers: Teachers are public servants hired to teach math, science, literature, world languages, social studies, and P.E. They are not hired to butt in to the emotional, moral, and psychological lives of other people’s children.

The Primary Stakeholder in Schools: Parents or Educrats?
b
a
x
r