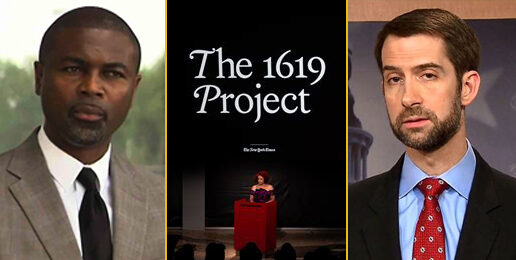 The 1619 Project has been controversial since its publication by the New York Times a year ago. While many on the left have praised it, with Oprah Winfrey even announcing plans to adapt the project into a television series, historians and those on the right have noted errors and call the collection of essays and poems revisionist history. Now, U.S. Senator Tom Cotton (R-AR) has proposed a bill seeking to ban public schools from teaching it as part of their curriculum.

While the project acknowledges the founding of the United States as taking place in 1776, it seeks “to reframe American history by considering what it would mean to regard 1619 as our nation’s birth year.” That year is important because it marks the arrival and enslavement of the first known Africans in the North American colony of Virginia. The project further determines that the American Revolution occurred because the original 13 colonies understood Britain would soon outlaw slavery, thus making war the only pathway to preserving the foul institution on this side of the Atlantic.

On July 30, Cotton told the Arkansas Democrat-Gazette, “The entire premise of the New York Times’ factually, historically flawed 1619 Project … is that America is at root, a systemically racist country to the core and irredeemable. I reject that root and branch.” Cotton’s bill is called the “Saving American History Act of 2020.”

The bill calls the 1619 Project “an activist movement” that is “gaining momentum to deny or obfuscate this history by claiming that America was not founded on the ideals of the Declaration [of Independence] but rather on slavery and oppression.” It notes that “this distortion of American history is being taught to children in public school classrooms” through curriculum based on the 1619 Project, which “claims ‘nearly everything that has truly made America exceptional’ grew ‘out of slavery.’”

It further states, “The 1619 Project is a racially divisive and revisionist account of history that threatens the integrity of the Union by denying the true principles on which it was founded.”

Of course, Cotton is meeting fierce opposition. The 1619 Project has been so well received by the mainstream media that in the spring of this year, Nikole Hannah-Jones, the journalist responsible for the project, was awarded a Pulitzer Prize.

Jordan Cohen, a spokesperson for the Times, said the project “is based in part on decades of recent scholarship by leading historians of early America that has profoundly expanded our sense of the colonial and Revolutionary period. Much of this scholarship has focused on the central role that slavery played in the nation’s founding.”

The same day Cotton’s bill was introduced, July 27, Hannah-Jones joined a Twitter conversation regarding whether the 1619 Project was about history or memory. She tweeted, “The fight here is about who gets to control the national narrative, and therefore, the nation’s shared memory of itself. One group has monopolized this for too long in order to create this myth of exceptionalism. If their version is true, what do they have to fear of 1619?”

She continued in the next tweet, “I’ve always said that the 1619 Project is not a history. It is a work of journalism that explicitly seeks to challenge the national narrative and, therefore, the national memory. The project has always been as much about the present as it has the past.”

Considering her statements, one wonders how can the 1619 Project be taught as history in public schools.

Even Hannah-Jones tweets later in the thread, “Further, the curriculum is supplementary and cannot and was never intended to supplant U.S. history curriculum (which is pretty terrible but none of these folks seem concerned about that.) Teachers have used it in English, social studies, art, foods classes.” However, reports are the curriculum is being taught as history. Protestors are proclaiming it as history in the streets.

The 1619 Project and Cotton’s bill appear to have had an effect on Illinois State Representative La Shawn Ford (D-Chicago). As you may know, Ford recently called on the Illinois State Board of Education to remove all history books in Illinois schools, and for schools to stop teaching history until new curriculum can be developed. He said current history books and curriculum “unfairly” communicate history.

A few days prior, Ford told Politico’s Illinois Playbook, “What’s being taught is inaccurate,” saying blacks were only depicted as slaves and that other minorities, including women and people of Jewish heritage, were also portrayed unfairly.

Take ACTION: Click HERE to contact your federal lawmakers and urge them to support the Saving American History Act of 2020, a bill that would prohibit the use of federal funds to teach the divisive 1619 Project by K-12 schools or school districts.