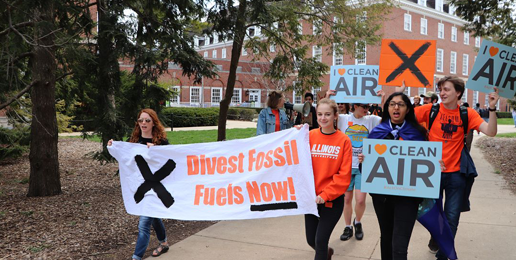 U of I “Climate Emergency” Reveals Dangerous Extremism
Written By Alex Newman   |   01.09.20
PRINT

Giving taxpayers and parents a sense of just what their money is being spent on, the University of Illinois declared a “climate emergency” ahead of the recent United Nations COP25 “climate” summit in Spain. About 200 other universities and organizations around the world made similar declarations by signing on to the letter.

In the so-called “Sustainable Development Goals (SDG) Accord,” signed by U of I President Timothy Killeen, signatories recognized the alleged “need” for “a drastic societal shift to combat the growing threat of climate change.” As part of that, the university vowed to ensure that the “young minds shaped” by its professors were “equipped” with the “knowledge” they would need to respond to this supposed “threat.”

To “step up to the challenge,” the university committed to supporting a three-point plan. This includes spending more money on “climate change research” and going “carbon neutral by 2030 or 2050 at the latest.” It also involves stepping up the climate indoctrination, described in the document as “increasing the delivery of environmental and sustainability education across curriculum, campus and community outreach programs.”

“We all need to work together to nurture a habitable planet for future generations and to play our part in building a greener and cleaner future for all,” the letter states. “We call on governments and other education institutions to join us in declaring a Climate Emergency and back this up with actions that will help create a better future for both people and our planet.”

The “SDG Accord,” named after the UN’s highly controversial Agenda 2030 Sustainable Development Goals, was signed by radical groups from around the world, including organs of mass-murdering Communist Party dictatorships that jumped on the “climate” bandwagon to extort Western taxpayers. Multiple governments and other organizations have also declared a “climate emergency.”

At the UN COP25, under the guise of stopping the supposed “climate emergency,” policies ranging from drastic population reduction and enforced lower living standards to imposing global taxes and “global governance” were all openly promoted. One prominent professor in Denmark even suggested the UN could use “peacekeeping” troops to enforce its climate mandates.

Ironically, when the European pseudo-Parliament was debating the measure to declare a “climate emergency,” German Members of the European Parliament (MEPs) were extremely uneasy. That is because National Socialist (Nazi) dictator Adolf Hitler also declared an “emergency” (Norstand, in German) to usurp all sorts of totalitarian powers under the guise of dealing with the supposed “emergency.”

Countless scientists, though, have ridiculed the notion of a “climate emergency.” Internationally renowned Princeton University physicist Dr. William Happer, who most recently served as climate advisor to President Donald Trump, warned in Madrid that the alarmist movement was a “bizarre environmental cult” that had manufactured a phony “climate emergency” to unleash its policies.

Speaking of Nazi emergencies, former senior NASA climatologist Dr. Roy Spencer, who now serves as a senior research scientist at the University of Alabama, blasted extremist peddlers of the man-made global-warming hypothesis as “global-warming Nazis.” Among the main reasons he chose the term is that the policies they advocate would kill far more people than Hitler’s National Socialists ever did.

The University of Illinois is no stranger to climate hysteria. In September, hundreds of high-school and college students gathered on campus to protest against alleged man-made “climate” changes, which they believe are caused by the gas they exhale (CO2). Professors are offering a great deal of “support” for their efforts, organizers of the demonstration said.

Speaking to the tax-funded Illinois Public Media talk show known as “The 21st,” students involved in putting together the climate march offered insight into the sort of dangerous and misleading propaganda they are being spoon-fed at their tax-funded university. And it was not pretty.

“I kind of figured out the polar bears aren’t dying because I’m leaving the lights on at night,” said U of I “Students for Environmental Concerns” campus President Abbi Pstrzroch. “They’re dying because climate change is very systematic and it’s deeply rooted in greed and corruption.”

Of course, in the real world, polar bears are not actually dying at all — they are thriving in an incredible way. In fact, according to leading polar bear expert Dr. Susan Crockford, a Ph.D. in zoology at the University of Victoria, polar bear numbers have actually exploded, with populations quadrupling just since the late 1960s when the “global cooling” scare was getting underway.

After complaining about the “eco-anxiety” that young people supposedly suffer from due to alleged man-made warming, Pstrzroch revealed what has long been very clear to observers: the “climate” movement has less to do with changes in climate, and more to do with imposing left-wing progressive changes on society.

The goals of the climate marchers, Pstrzroch said, include: “respect for indigenous lands, climate justice, sustainable agriculture, protection and restoration of biodiversity, as well as a Green New Deal mainly focusing on legislative with fossil fuels.” The proposed “Green New Deal” called for banning airplanes and “farting cows,” paying people who do not want to work, and many other absurdities.

Despite the U of I joining hundreds of other institutions around the world in declaring a “climate” emergency, the UN COP25 summit in Madrid did not succeed in advancing the extreme policies sought by the alarmist movement. That is mostly because President Trump stood in the way and quit showering billions of U.S. tax dollars on the schemes.

However, with public schools and left-wing universities such as those in Illinois flagrantly indoctrinating students into climate alarmism and progressive ideology, advocates of a planetary “climate” regime remain hopeful. It will be up to grassroots Americans to defend truth and freedom.