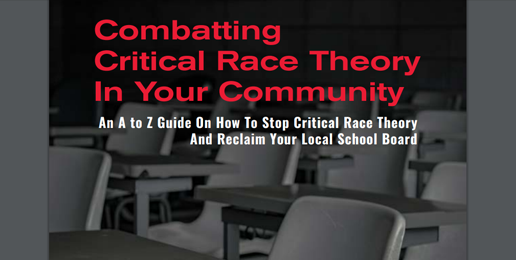 We are proud to share this great resource from our fiends over at Citizens for Renewing America.

This guide is meant for anyone who is concerned about what children are being taught in our government schools. It is designed to help you organize a community effort in order to ban the teaching of Critical Race Theory (CRT) in your local schools. CRT is a branch of Social Justice, and it is derived from Critical Theory. According to one trusted source,

The Frankfurt School, a consortium of Marxist academics, invented Critical Theory as another update to Marxism. Critical Theory criticizes society in an effort to affect change. The change Critical Theorists wanted was to rid Western society of its capitalistic roots and traditional morality.

Proponents of this divisive ideology are working hard to dismantle western institutions, including all educational institutions, churches and Christian organizations. In order to fight this agenda, we must understand it. We can then better identify the tactics of our opposition and expose their lies and true motives.

Though some of the resources in this guide may have strong conservative bias, they nevertheless have important resources or information that you might benefit from as you try to create a plan to stop CRT in your local schools. To help you move forward, the toolkit below includes a crash course on Critical Race Theory, which will be enough to get you caught up to the point that you will be able to actively participate in efforts to stop it.

Section I describes what CRT is, how to spot it, and how to identify the tactics being used against you by CRT proponents.

Section II focuses on how to grow your network.

Section III enables you to tie together Sections I & II and turn those efforts into a political strategy to reclaim your local school boards with conservative candidates.

A Short History of Critical Theory (The Benedict Option)

Critical Race Theory: What It Is and How to Fight It (Imprimis)

Critical Race Theory: It’s A Cancer, Not A Cure