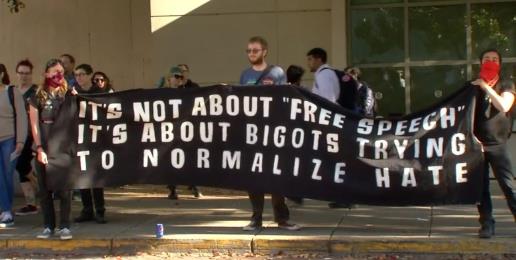 Many years ago, I witnessed what happens when people who prevent others from speaking are not dealt with promptly.

During a “Firing Line” taping with William F. Buckley at Bard College in New York State on the topic of “Resolved: The ACLU is full of baloney” (the short answer is “yes”), two female activists stood up and started chanting “women of color have no voice.”

The moderator, a well-known liberal (well, okay, it was Michael Kinsley, who did an otherwise fine job), asked them politely to stop so the debate could continue, but the protesters refused.  At this point, he could have motioned to the campus cops to remove them, but instead let them go on ad nauseum.  I leaned over and whispered to then-ACLU President Nadine Strossen, “Nadine, do something. They’re your children.”  I meant her ideological offspring, of course.  And she did try to reason with them, to no avail.

Unlike some recent incidents, the debate finally went on after Mr. Kinsley gave in to the protesters’ tantrum, let them read a list of nonsensical leftwing ultimatums, and Bard’s president agreed to leave the team he was on in the debate.

I’m not sure how much of this made the eventual PBS broadcast, but it showed the folly of giving in to the heckler’s veto.  That’s when, in the name of free speech, someone silences someone else.  Courts have made it clear that the heckler’s veto is not protected speech under the First Amendment, no more than falsely yelling “fire” in a crowded theater.

Since President Trump’s election, the Left has been in full heckler’s veto mode, egged on by the same progressives who cheered the violent Occupy mobs in 2011 and 2012 and the goons disrupting the Trump rallies last year.

[Recently], protesters threated violence against Republican Party participants in the 82nd Avenue of Roses Parade in Portland, Oregon, and managed to get the event canceled.   An anonymous email promised that “two hundred or more people” would “rush into the parade into the middle and drag and push those people out…. police cannot stop us from shutting down roads so please consider your decision wisely.”

Then, amid threats of violence, conservative author Ann Coulter was forced to cancel her speech at the University of California, Berkeley.  In February, the campus had suffered $100,000 in property damage when black-clad leftist rioters stopped iconoclast Milo Yiannopoulos from speaking.

In March, political scientist Charles Murray was forced to change venues at Middlebury College in Vermont during a mob attack in which a female professor was injured.  Middlebury itself may be failing to teach about constitutional rights, if a letter signed by 450 alumni prior to Murray’s appearance is any indication:  “This is not an issue of freedom of speech.  In this case we find the principle does not apply.”

Well, okay then. Disagree with us and you lose your rights.

In early April, hundreds of activists blocked an auditorium at Claremont McKenna College in California to prevent author Heather MacDonald from speaking.  Ms. MacDonald’s analysis of crime statistics blows away the media narrative about racist cops spun by the Black Lives Matter movement.  No wonder they wanted her silenced.

For the Left, the issues themselves matter less than a show of force.  As author Angelo M. Codevilla has observed, “The point of PC [political correctness] is not and has never been merely about any of the items that it imposes, but about the imposition itself.”

“The replacement of the bourgeois (middle class) by the proletariat state is impossible without a violent revolution … it is still necessary to suppress the bourgeoisie and crush its resistance.”

Even if none of this involves something you hold dear, the mobs will get around to you if you’re out of step.  A byproduct is the chilling effect it has had on discourse in general.

I recall when liberals and conservatives could agree to disagree during, say, a party, and leave as friends, or at least not as enemies.  But when’s the last time you went to an eclectic gathering and heard genuine views exchanged?  Nobody dares anymore.  The Left’s scorched-earth tactics have poisoned the well.

In Massachusetts, an editorial at The Wellesley News on April 12 openly advocated attacking anyone who fails to bow to leftwing orthodoxy.  Their definition of what will not be allowed includes “racism, sexism, homophobia, Islamophobia, transphobia or any other type of discriminatory speech.  Shutting down rhetoric that undermines the existence and rights of others is not a violation of free speech; it is hate speech.”

The good little Maoists (who are punctuation-challenged) went on to declare, “if people are given the resources to learn and either continue to speak hate speech or refuse to adapt their beliefs, then hostility may be warranted.” Later, they denied that this meant engaging in violence.

Incidentally, Hillary Clinton’s alma mater charges about $63,300 annually for tuition, room and board.  Apparently, that buys the finest brainwashing against the bourgeoisie that a campus can conjure.