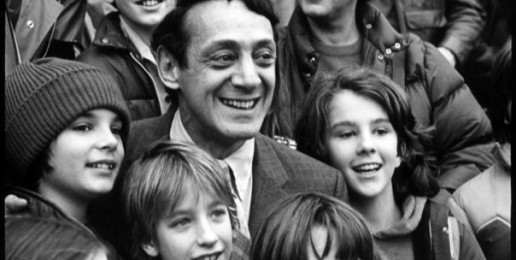 It shouldn’t surprise anyone that President Barack Obama invited the obscene, Christian-hating, homosexual, manboy Dan Savage to the White House. After all, President Obama’s  “Safe School Czar” was the homosexual founder of the Gay, Lesbian and Straight Education Network (GLSEN), Kevin Jennings; and Obama awarded a Presidential Medal of Freedom posthumously to the infamous homosexual Harvey Milk who was deified in the Hollywood film Milk.

And why am I bringing this up? I’m bringing it up because May 22 is “Harvey Milk Day” in California–yet another abuse of public schools to advance the moral beliefs of homosexuals and their ideological allies. There are few reasons to be thankful to live in Illinois, but this is one: We don’t yet have a law proclaiming a day of commemoration for Harvey Milk in our public schools.

I’m also bringing it up because many have seen or heard of the eponymous film about Harvey Milk and starring Sean Penn but may not know how far from reality the film’s depiction of Milk is.

In 2009, then governor Arnold Schwarzenegger signed SB 572 into law. This law, introduced by openly homosexual Senator Mark Leno, designates May 22 “as having special significance in public schools and educational institutions and would encourage those entities to conduct suitable commemorative exercises on that date.”

And why do liberal California lawmakers consider May 22 significant in public schools? They believe that children in grade K-12 should commemorate annually the birthday of the “first openly gay man to be elected to public office in a major city of the United States,” who was murdered by a disgruntled colleague.

The law states that “all public schools and educational institutions are encouraged to observe…and to conduct suitable commemorative exercises as follows: On Harvey Milk Day, exercises remembering the life of Harvey Milk, recognizing his accomplishments, and familiarizing pupils with the contributions he made to this state.”

Peter Sprigg of the Family Research Council says this about the man whom Obama and Schwarzenegger think should be honored: “Milk is famous only for winning one election, being murdered – and having sex with men.”

And it wasn’t just adult men with whom Milk had sex. Sprigg recounts that Milk was also fond of teenage boys. In fact, one of his live-in relationships was a pederastic relationship with a 16-year-old boy when Milk was 33.  Yes, I can understand why Obama wanted to honor him and Schwarzenegger thinks children should commemorate him.

According to Daniel Flynn, “the real Harvey Milk was a short-tempered demagogue who cynically invented stories of victimhood to advance his political career.” And contrary to the implication in the film, Milk was not murdered because of his homosexuality, but rather because he was instrumental in preventing a board of supervisors member from regaining his seat.

The most shocking omission from the film and likely from the tall tales California public school teachers tell their young students is that Harvey Milk was a huge supporter of Reverend Jim Jones:

Nine days prior to Milk’s death, more than 900 followers of Jim Jones — many of them campaign workers for Milk — perished in the most ghastly set of murder-suicides in modern history. Before the congregants of the Peoples Temple drank Jim Jones’s deadly Kool-Aid, Harvey Milk and much of San Francisco’s ruling class had already figuratively imbibed. Milk occasionally spoke at Jones’s San Francisco–based headquarters, promoted Jones through his newspaper columns, and defended the Peoples Temple from its growing legion of critics. Jones provided conscripted “volunteers” for Milk’s campaigns to distribute leaflets by the tens of thousands. Milk returned the favor by abusing his position of public trust on behalf of Jones’s criminal endeavors.

“Rev. Jones is widely known in the minority communities here and elsewhere as a man of the highest character, who has undertaken constructive remedies for social problems which have been amazing in their scope and effectiveness,” Supervisor Milk wrote President Jimmy Carter seven months before the Jonestown carnage. The purpose of Milk’s letter was to aid and abet his powerful supporter’s abduction of a six-year-old boy. Milk’s missive to the president prophetically continued: “Not only is the life of a child at stake, who currently has loving and protective parents in the Rev. and Mrs. Jones, but our official relations with Guyana could stand to be jeopardized, to the potentially great embarrassment of our State Department.” John Stoen, the boy whose actual parents Milk libeled to the president as purveyors of “bold-faced lies” and blackmail attempts, perished at Jonestown. This, the only remarkable episode in Milk’s brief tenure on the San Francisco board of supervisors, is swept under the rug by his hagiographers.

This is the man that homosexuals and their allies celebrate and seek to promote as a hero in our taxpayer-subsidized schools. In their effort to exalt Milk as a civil rights hero in public schools to young, naive students,  the truth about him is concealed. There’s even a children’s picture book designed to indoctrinate little ones, titled The Harvey Milk Story. It’s been positively reviewed by Kirkus Reviews and by K.T. Horning, children’s librarian, author, and educator who has served on numerous influential literary boards, and “many book award and evaluation committees, including the American Library Association’s “Rainbow List.”

Public schools are one of the central battlegrounds for the war on moral truth regarding homosexuality. Specious “civil rights” arguments, like the ones promoted by worshippers of Harvey Milk, based on an absurd, untenable comparison of homosexuality to race, and media-fomented hysteria about bullying are driving the exploitation of public education.

Unless and until parents become willing to tell administrators and teachers preemptively that under no circumstances are their children to be exposed to any resources or activities that mention homosexuality or gender confusion, the exploitation will not merely continue, it will increase.