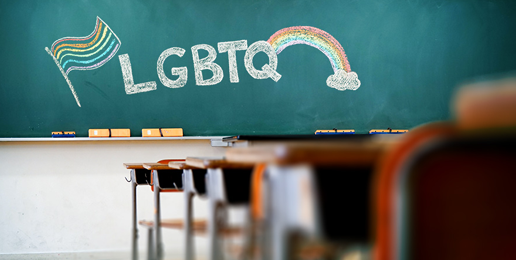 One of the accusations that is most offensive to gays and lesbians is that they are child predators who want to seduce our children sexually. I stand with them in finding this accusation to be highly offensive.

Nonetheless, the vast majority of gays and lesbians are not pederasts. And so, to accuse them of infiltrating our schools in order to prey sexually on our children is both ugly and false. (See, here, however, for potential problems with school-based Gay Straight Alliances.)

The LGBT’s Ideological Goals for Our Children

But what is 100 percent truthful is that while the vast majority of LGBT activists presumably do not have sexual goals for our children, they most certainly have ideological goals. Without a doubt, they want to influence the way our children think.

They want children to embrace the possibility of gender fluidity.

They want them to consider whether they might be transgender themselves.

All of this is easily documented, and at this point in history, cannot be reasonably denied. The ideological seduction of our little ones is at hand today. And it has been at hand for some years now.

Well over a decade ago I purchased the GLSEN Lunchbox (second edition), containing helps for gay-friendly educators to be used in grades K-12.

The goals, of course, were to teach “tolerance” and to reduce “anti-LGBT harassment” in our schools. But the method was to normalize, if not celebrate, virtually every LGBT talking point.

The Lunchbox included activity cards, some of which listed famous people from history, all of whom were allegedly gay. Other activity cards offered definitions of terms like genderqueer (and remember, the target audience for some of these activities was elementary school children.)

Then there was the exercise called “Getting in Touch with Your Inner Trannie” (as in transgender identity). And I remind you: This goes back over a decade.

When I testified before a local school board, holding up the Lunchbox and its full-length training manual, one of the board members said out loud, “That material is not in that box.” (I guess for some people, it’s better to deny the truth rather than face it.)

What has happened in the years since?

Here’s the tiniest sampling, not even touching on the many LGBT-themed curricula in our schools.

Bergman explains, “All that time I said I wasn’t indoctrinating anyone with my beliefs about gay and lesbian and bi and trans and queer people? That was a lie. All 25 years of my career as an LGBTQ activist, since the very first time as a 16-year-old I went and stood shaking and breathless in front of eleven people to talk about My Story, I have been on a consistent campaign of trying to change people’s minds about us.”

Again, Bergman is not talking about sexual recruitment. Absolutely, categorically not. But he is talking about changing people’s minds, beginning with children: “I want them to know that we’re absolutely as worthwhile and worthy of love and respect as anyone, and that if you’re kind to us and behave yourself well there’s a better than even chance you can get an invitation to brunch.”

And what if that means children coming into conflict with their parents or their religion? Bergman doesn’t flinch: “I want kids to know this even if their parents’ or community’s interpretation of their religious tenets is that we’re awful. I would be happy — delighted, overjoyed I tell you — to cause those children to disagree with their families on the subject of LGBTQ people.”

I stand with Bergman in calling for the gracious treatment of all human beings. And I personally counsel parents to encourage their children to befriend other kids who are marginalized. In this effort, we agree.

This article was originally published at The Stream.com