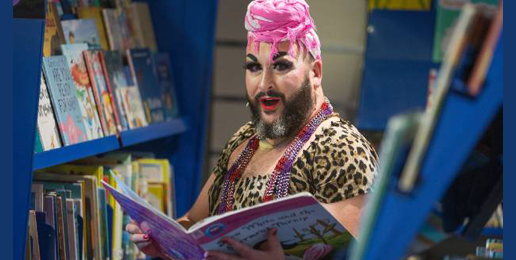 The ALA Plunges Deeper into the Drag Cesspool
Written By Laurie Higgins   |   08.21.18
PRINT

The American Library Association (ALA) has revealed that it has not yet reached the nadir of ethical corruption. Through its Association for Library Service to Children (ALSC) division, the Intellectual Freedom Committee, which promotes “continuing education programs” for children, just wrote this (you better be sitting down):

Interested in bringing Drag Queen Storytime to your library? ALSC Committee Members received tips for optimizing success from library pioneers who have already done it.  We also had the chance to meet a Drag Queen who talked about the value of offering this program, including fostering empathy, tolerance, creativity, imagination and fun.

I kid you not. Librarians who have brought in deviant entertainers to captivate the innocent imaginations of toddlers are “pioneers”? Think “brood of vipers.”

Every year, the ALA sponsors the laughably named “Banned Books Week” (this year, Sept. 23-29, 2018) during which self-righteous, dissembling librarians foment “book-banning” paranoia. The ALA fancies itself a bastion of liberty and arch-defender of the free exchange of ideas. In reality, the ALA is most notable for being a censorious, partisan purveyor of perverse leftist ideas about sexuality. The ALA can’t seem to find an idea too perverse for children and can’t discern an age too young to be exposed to perversion. 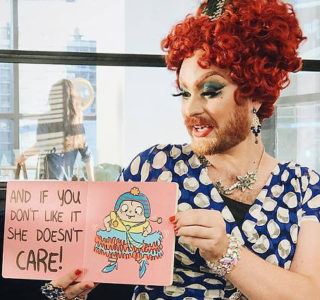 The ALA pursues its hysteria-fomenting goal chiefly by ridiculing parents who, for example, don’t want their five-year-olds seeing books about children or anthropomorphized animals being raised by parents in homoerotic relationships. Scorn will be heaped on parents who hold the unpopular belief that homoeroticism and cross-dressing—even when presented in whitewashed, water-colored images—don’t belong in the picture books section of public libraries.

Most taxpayers have no idea how purchasing decisions in publicly subsidized libraries are made, but they should, because the policy librarians follow serves as a de facto book-banning mechanism.

Libraries use Collection Development Policies (CDP’s) to determine which books they will purchase with their limited budgets. CDP’s maintain that librarians should purchase only books that have been positively reviewed by two “professionally recognized” review journals. Guess what folks, the “professionally recognized” review journals are dominated by ideological “progressives.” Publishing companies too are dominated by ideological “progressives,” so getting books published that espouse conservative ideas (particularly on the topics of homosexuality and gender dysphoria) is nigh unto impossible.

If librarians really cared about the full and free exchange of ideas and if they really believed that “book-banning” is dangerous to society, they would direct their rage and ridicule at the powerful publishing companies, professionally-recognized review journals, and their own profession, all of which do far more “book-banning” than does a handful of powerless parents seeking to have a picture book removed (or sometimes just moved).

We never served the gay community. Now, we didn’t serve the gay community, because there weren’t materials to serve them. You can’t buy materials if they’re not there. But part of our responsibility is to identify what we need and then to begin to ask for it. Another thing we have to be real careful about is that even though the materials that come out initially aren’t wonderful, it’s still incumbent upon us to have that voice represented in the collection. This was exactly what happened in the early days of the women’s movement, and as the black community became more visible and began to demand more materials that fulfilled their particular information needs. We can’t sit back and say, “Well, they’re not the high-quality materials I’m used to buying.” They’re probably not, but if they are the only thing available, then I believe we have to get them into the library. (emphasis added)

I wonder if librarians heed Krug’s words when it comes to resources that espouse conservative views on homosexuality and gender dysphoria. Are the anti-book-banning soldiers fighting to fill the gaping lacuna in their picture books and Young Adult (YA) literature collections on these topics? Are they fulfilling their responsibility to fill that hole if necessary with materials that are less than “wonderful”—which is to say, with materials that their “professionally recognized review journals” may not review positively or at all?

Here are some children’s book ideas that librarians could request to fill gaps in their collections. These are not book ideas I want to see in libraries. Rather, they’re topics ALA members would request if they were truly committed to the principles they espouse:

I listed several of these story ideas four years ago in an article that so enraged “progressives” that some  homosexuality-affirming websites, including Huffington Post, took me to the woodshed. In doing so, they (not surprisingly) misrepresented my thesis. I was wondering whether librarians would request and include stories in their book collections with which some children may identify but that convey ideas “progressives” don’t like. I was suggesting that “progressives” engage in a more absolute form of “book-banning” than the kind of which they accuse conservatives.

The anger of “progressives” on these websites demonstrated that they are far more, shall we say, “passionate” in their opposition to books they don’t like—including even book ideas—than are conservatives. “Progressives” become enraged in the presence of a story idea—including book ideas that haven’t even a hint of hatred.

Their anger confirmed my point. When conservative parents challenge an occasional book, “progressives” ridicule them (which includes librarians ridiculing their own patrons). When I merely describe hypothetical storylines, “progressives” go ballistic. How dare I even propose a story that suggests some child somewhere may want a mother and a father or that a teen may not like the promiscuity of her fathers or the emotional and relational instability of his mothers. If this is how homosexuals respond to a story idea, imagine if such a story were published and purchased and displayed in a library? If that were to happen, librarians better be ready for the jackbooted, anti-censorship change-agents who will storm-troop in demanding that some book-banning take place pronto. They might even sue.

And the ALA claims to be all about intellectual freedom.  Yeah, right. And the emperor’s new clothes are fabulous.

The ALA is plunging deep into the “drag” cesspool, pulling children down with them.

It would be better for him if a millstone were hung around his neck
and he were cast into the sea than that he should cause one of these little ones to sin.
(Luke 17:2)