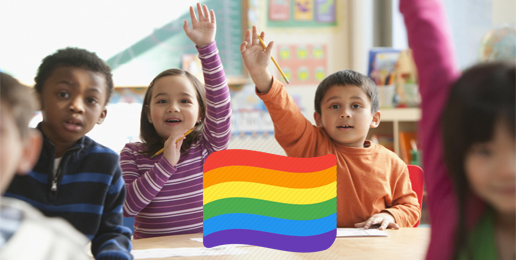 Want to know who “progressives” in Springfield fear? They fear parents with kids in private schools. The rest of you are merely annoying gadflies to be swatted down with a rolled-up copy of their school sexuality-indoctrination bill and haughty flick of their wrists.

Why do I say that? Because the Springfield swampsters, fearing the wrath of private schoolers, just introduced an amendment to their “Inclusive Curriculum” bill that exempts private schools from the mandate that schools teach about the disordered sexuality of cultural contributors.

You heard that right. Springfield swampsters couldn’t care less how conservative parents with kids ages 5-18 in government schools feel about their children being forced to learn that not only was Sally Ride the first woman in space but that she was also a LESBIAN! Hurray for homosexuality!

State Sen. Heather Steans (D-Chicago), who introduced both the Senate version of the bill (SB 3249) and the amendment will use every resource at her disposal to ensure that your taxes are used to undermine your belief that homosexual desire is disordered and homosexual acts immoral.

Steans and State Rep. Anna Moeller (D-Elgin), who introduced the House version (HB 5596), evidently believe the nonsense that homosexuality per se is analogous to race per se. Of course, that I know of, they’ve never actually made their case for such an analogy even as they plow forward exploiting it. It’s an expedient tool for advancing a moral ideology, so why should they care if it makes any sense.

Please note that no lawmaker would propose and no administrator or teacher would support a bill like this unless they had arrived at a prior moral conclusion that homosexual activity is moral activity. That’s why no one has yet proposed a bill that would mandate the teaching of the roles and contributions of bigamists, polygamists, or polyamorists. They wouldn’t propose or support such a bill even if some teens or their parents identify as bigamists, polygamists, or polyamorists. They wouldn’t propose such a bill even to curb bullying. And why is that?

So, unless you want the sexuality ideology of Leftists taught to your children in public schools at your expense, you best muster the fervor of parents who send their children to private schools. Push back and push back hard.

And those of you who homeschool or private-school your children, if you care about how your taxes are used; if you care about the indoctrination of children, some of whom will be our culture-makers in a few short years; and if you care about the plight of your friends and neighbors who can’t homeschool or afford private school, please join this important battle for the hearts and minds of Illinois children. You know it’s only a matter of time before “LGBTQ” activists and their ideological allies come after private schools and then home schools. They are no respecters of boundaries or of conservative parents.

Take ACTION: Click HERE to send a message to both your state representative to urge him/her to reject this effort to politicize curricula in order to advance biased beliefs about sexuality to children in government schools. Contact them repeatedly.

Click HERE to check out this week’s IFA podcast for more information!