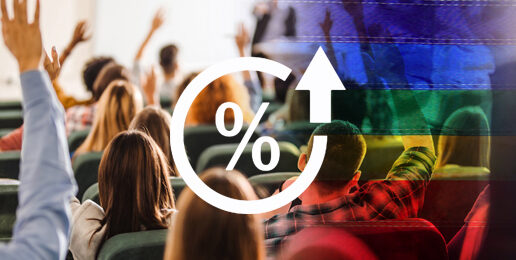 But it’s even worse.

George Barna, founder of the Barna Group, is a professor at Arizona Christian University and leads the Cultural Research Center based there. His groundbreaking research on cultural trends, especially within the church, is cited worldwide. Last year, Barna found that among those ages 18-24, thirty-nine percent self-identified as LGBTQ!

Just last week, a family member told her mom that she has 2 lesbians in her class. She’s 12 years old.

How is this even possible when twenty years ago, that number of LGBTQ individuals was 2-3 percent at best?

One does not have to look far to see who’s behind this deception. The biggest contributors to this concerning trend are public schools and their willing accomplices, Illinois lawmakers. They have been slowly pushing and promoting sexual deviancy for years.

In 2013, Illinois lawmakers mandated that all public schools that taught any type of sex ed must teach so-called “comprehensive” sex ed. This included 6th graders being taught that homosexuality, bisexuality and transgenderism is simply another way to express oneself sexually. We are talking about teaching this corruption to 11 or 12-year-old impressionable children!

In 2015, Illinois lawmakers passed HB 217 which banned all professional counseling for minors who experience unwanted same-sex attraction and gender confusion. This means that any professional counselor could lose their license if someone turns them in for helping a young person who wants help.

In 2017, Illinois lawmakers passed HB 1785 which allows individuals to change the gender on their birth certificate.

In 2019, Illinois lawmakers mandated that public school history lessons include the roles and accomplishments of the LGBTQ community.

In 2019 Illinois lawmakers added “non-binary” to gender designation on all state forms, including driver’s licenses.

And in 2021, Illinois lawmakers approved SB 818. This bill was backed by abortion-determined groups like Planned Parenthood and LGBTQ advocacy groups like Equality Illinois.

SB 818 mandates that any school that teaches safety, health, or sex ed class must teach comprehensive sex ed to align with the National Sexuality Education Standards. These standards were written by progressive LGBTQ groups and those that profit from early sexual activity such as Planned Parenthood. Plus, as these standards change (get more pornographic), so will the sex ed in Illinois.

SB 818 requires that sex ed begin in kindergarten where children will learn all about homosexuality and transgenderism. Each grade level will affirm what has been previously taught and introduce the children to a wider range of deviancy, often using pornographic cartoon-like graphics.

And less you think the insanity stops here, lawmakers passed HB 24 which introduces 6th graders to sexting. And last but not least, they passed one of the most insane bills ever – HB 156 – which requires tampons and other feminine hygiene products be placed in boys bathrooms in public schools with your tax dollars.

Children are being exposed to an ideology that is not only pornographic but thoroughly confusing to them. And this begins in kindergarten and continues every year through 12th grade.

If an adult exposed a young child to this same material outside of the classroom, they would be accused of disseminating obscene material, and accused of being a pedophile. This heinous material is not only grooming children for early sexual activity, but it’s encouraging experimentation with dangerous sexual behaviors.

Many of those promoting this agenda are those who profit from sexualized children. Furthermore, those same people have lobbyists in Springfield and Washington D.C., working against parents and grandparents; pushing mandates while purchasing the votes of morally deficient lawmakers to do their bidding.

It’s not a mystery that the numbers of those now “self-identifying” as LBGTQ+ who are experimenting with all sexual behavior at astoundingly early ages is increasing. It is being taught to your children. It is being celebrated by their teachers and it is being protected by lawmakers. Get your children out of public school!